Yesterday Najib Razak symbolically decoupled from the 1Malaysia concept which has been hanging like an albatross around his neck. He did so by packing his bags and moving out from the www.1Malaysia.com.my address.

But after 5 years, 11 months and 17 days of 1Malaysia floundering in icy cold water, the PM finally decided to vacate his old home. What this signals is that folks should stop bothering to go to 1Malaysia to find the poor man. He doesn’t live there anymore.

He has launched a new personal website at www.najibrazak.com. The 1Malaysia site will however continue functioning under the care of his consultants.

“Alhamdulillah”, Najib tweeted the announcement (above).

BELOW: Hannah Yeoh sent a mocking salam 1Malaysia to the Umno and MIC “racists”

At last, giving up the ghost

Dieters have a motto “no pain, no gain” about their efforts at exercising and weight loss. For Najib though, 1Malaysia has been all pain and no gain.

From Day 1 of the ill-fated endeavour albeit one with good intentions, its initiator has been heckled and jeered by the Dapsters. The idea of our country united as one – Najib’s package – was pitilessly ridiculed, and its meaning and purpose twisted by the DAP evangelistas.

Mama Dapster, for example, exploited 1Malaysia for her ‘Anak Malaysia’ birth cert showboat as well as slapped around the label like a whipping boy to taunt the “what kind of 1Malaysia Prime Minister we have” – see the @hannahyeoh tweets below.

Dead in the water from the get go

It was too painful to watch. There he was, always photographed faithfully wearing that tiny 1Malaysia pin on the lapel of his well-tailored suits – see photo montage below.

Saddening too to see Najib valiantly carrying 1Malaysia on his own without any support – either from his own BN camp or from the opposition, despite the latter’s posturing at bipartisanship and ostensible desire to bridge the political divide … konon.

From the roundly rebuffed Najib came a plaintive rebuke in closing the chapter:  “Strengthening the idea of 1Malaysia, however, is not the duty of the government alone. It is for all Malaysians”.

Najib had extended the olive branch but Malaysians refused to reciprocate his gesture, and this was mainly due to the discouragement and nasty egging from the DAP’s small-minded Christian leadership.

Introducing 1Malaysia did not help Ah Jib Gor score any brownie points with the Malays who thought he was only pandering to the Chinese.

Likewise, it failed to endear him to the Chinese, to whom his message about how “every citizen has a place under the Malaysian sun” had hoped to appease and appeal.

In the end, it was a case of yang dikejar tak dapat, yang dikendong tercicir pula. A lose-lose situation for the Father of Transformation and an inevitable outcome Najib has ultimately come to realize.

BELOW: BN’s Parliament seats are overwhelmingly in the rural areas 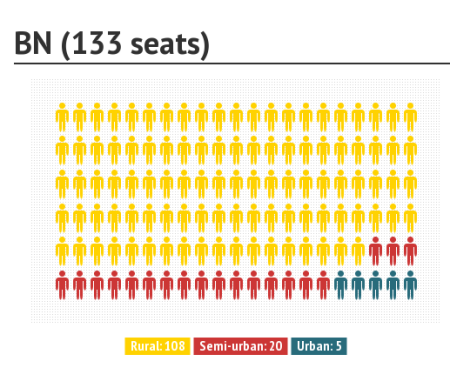 Popularity direction pointing down, not up

From December 2013 to June 2014, Najib’s approval rating slipped from 52 percent to 48 percent. At the same time, dissatisfaction with his performance as PM increased from 41 percent to 45 percent. These figures cover Malaysians of all races across the peninsula.

To put it in simple terms: Over the last three-quarters of the year, more and more people have been unhappy (red colour segments below) with Najib and less and less people happy (blue) with him.

BELOW: Pie chart comparison over the period of

Zeus hurled a thunderbolt a couple of weeks ago when he menegur (Aug 18):

The reforms carried out by Najib, such as repealing the ISA and Emergency Ordinance, did not win him any thanks from his opponents. Nor did it make the opposition supporters love the PM any better.

Without the ISA, and with Najib’s “liberal policies”, the non-Malays have instead become emboldened, complained the Home Minister recently when grumbling about “the price of being too nice”.

Zahid Hamidi said in his speech at the Segambut Umno divisional AGM four days ago (Sept 1):

“Since 2008, inter-racial unity is in tatters. They – forgive me for saying this – the non-bumiputera have become more biadap dan kurang ajar.”

Merdeka Center’s 2013 and 2014 data is adapted to create the bar chart below. It points to a trend of Najib’s increasingly unpopularity, and getting more unpopular by the day among the Malays.

Last December, Najib satisfied only 21 percent of the Chinese respondents polled. In the centre’s most recent opinion survey covering June this year, the number of Chinese satisfied with the PM’s performance dropped marginally to 20 percent.

More alarming however is Najib’s poorer reception among the Malays. In Dec 2013, Najib’s approval rating with the Malay community was 66 percent; by June 2014, it had fallen to 60 percent. 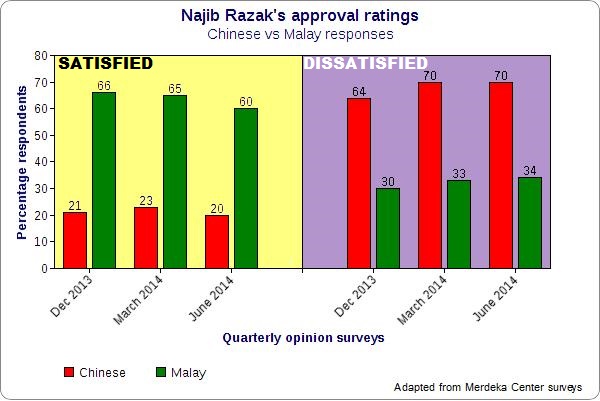 We can conclude from the survey results that Najib is losing people support on all counts.

Usually when an Umno leader makes the Chinese unhappy, he will conversely make the Malays happy – for example, the ISA issue in which the two communities hold opposite views.

In Najib’s case, he does things which – theoretically – should please the Chinese (e.g. abolishing the ISA) but somehow did not mitigate one bit their great hostility towards him. These things which Najib does, have – on the other hand – annoyed and upset the Malays and is translated into his weakening popularity ratings. 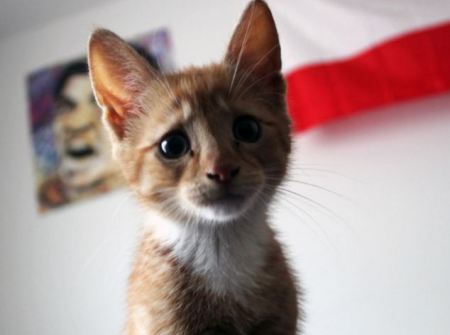 Najib Razak has given up on 1Malaysia – that’s how I read it.

The DAP have done their utmost to kill Najib’s stillborn baby in order to sell their version of Malaysian First. Well, DAP puts ‘1st’ behind the Malaysian nationality whereas Najib puts ‘1’ in front of country name. So what’s the difference between the two, really?

Umno is the BN backbone and the ruling coalition’s roiling fortunes are tied to the rise or fall of the Malay party. To ensure the BN’s continued survival, Umno has no choice but to tread the Race and Religion path due to the reality of its rural Malay vote bank being spooked by the Chinese and the Christians.

Yet the DAP is wholly blaming the Umno hawks for our current political developments. True, this crackdown on sedition can be said to be the ‘stick’ approach simply because for the past half dozen years, the ‘carrot’ has cut no ice.

It is political suicide for Najib to ignore the very people that provide Umno its power base (diagram below). What we’re experiencing now is Melayu bangkit. DAP is being disingenuous to pretend that their freaky evangelistas have not had a big hand in pushing Najib to the edge of the cliff.