I wonder who Marina Mahathir’s targets are.

Refer, “Take that, all you racists!” Marina says (below).

Marina is a member of the National Unity Consultative Council (NUCC) as well as the J-Star‘s chiefest “brave and beautiful” Voice of Moderation.

Below is her ad for the J-Star campaign. Her Brave View, Bold Idea poster girl statement reads: “If politicians are for the people, why do they insist on dividing us?”

Marina’s sock-it-to-’em – “Take that, all you racists!” – mirrors the message delivered by her BFF Ambiga. 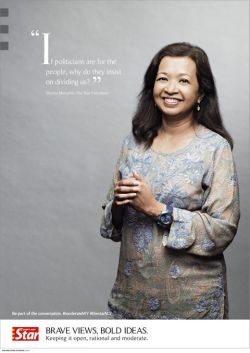 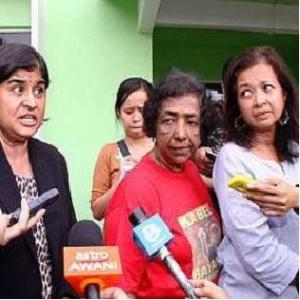 Ambiga had called upon Malaysians to rise up, especially over this long weekend (leading up to Malaysia Day on Tuesday), to wrest Negaraku back from the racists and extremists.

Marina is strident against the politicians who are insistent “on dividing” Malaysians. Urm, which politicians, ah?

Hmm … let’s see who she is peeved about. In her tweet (below), Marina called upon the gomen to “stop using taxpayers’ money to fund Perkasa n Isma”. 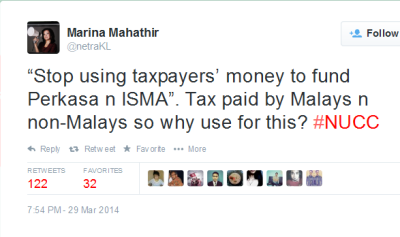 Yesterday alone, Isma and Perkasa were singled out several times by DAP people for censure.

Dr Wong Chin Huat, a fellow at the Penang Institute (state-backed think tank), was reported in the TMI as naming both as the organizations responsible for stoking Malay-Muslim sentiments. 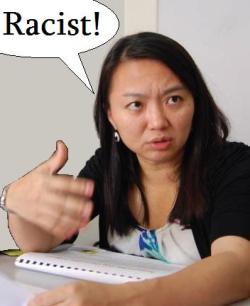 Yesterday too, Lim Guan Eng was quoted in The Sun Daily as lambasting the government’s seemingly “selective prosecution” after Perkasa appeared to have escaped Sedition Act punishment.

The DAP sec-gen alleged that the right wing leaders had made “inflammatory statements” against non-Malays and non-Muslims.

Hannah Yeoh recently retweeted Razifi’s dare as well on the Sedition Act charges: “Bring it on bcos for every single one of us you take down, 10 more will come.”

Soul to soul with the Christians

“… Malaysians have been relentlessly bombarded with hateful statements from the likes of Perkasa, Isma and other Malay ethnocentric groups. They have questioned the loyalty of their fellow Malaysians and suggested that the majority of non-Malays are a threat to Malays and national unity. Hiding behind the mask of race and religion, they claim to represent the voice of the majority of Malaysians particularly Malays.”

BELOW: Marina agrees that Perkasa will be “jumping like a butt-burned frog” to see Malays and Muslims attending an event at the Christian Ecumenical Worship Centre 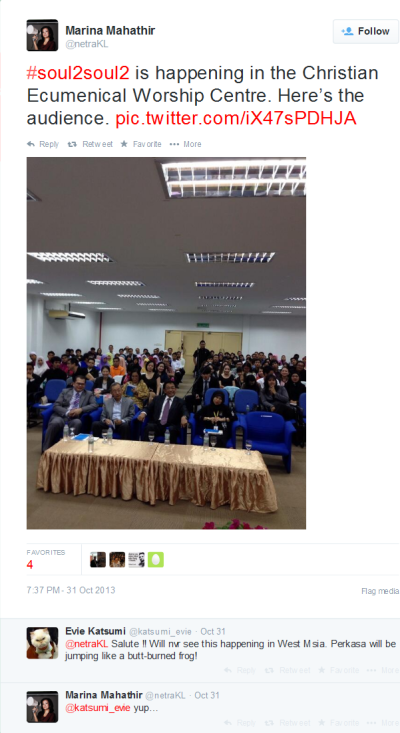 Some of Marina’s friends/fans believe the Isma folks are “a bunch of people with insecurity [complex]” whereas Malaysia will surely be a better place if only all Malays were like Marina.

The Penang chief minister declared that his state “rejects racists [and] extremists” and that Penangites should be left alone to enjoy their “religious harmony”.

Can it be said that Isma and Perkasa members fail to promote religious harmony because they do not go to church to attend weddings and other functions, and to give flowers to the pastors? 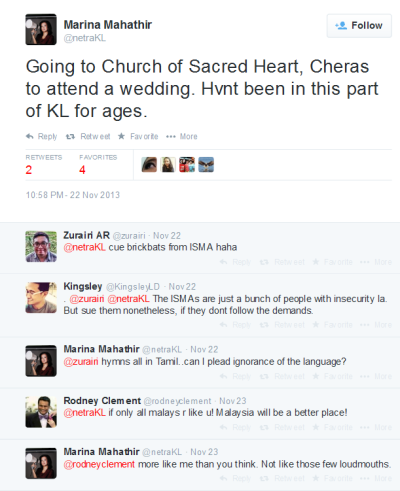 On a side note, Umno was the party that persuaded the Malay rulers to agree to the giving away of Merdeka citizenships, which numbered one million. See table below.

Some Anak Bangsa Malaysia complain that first and second generation Indonesians are accepted by the Malays whereas the third or fourth generation Chinese are still treated as aliens. 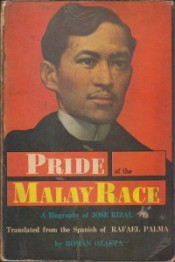 Well, this is because people living in the gugusan kepulauan Melayu and semenanjung have a shared history and practise the same religion and culture as well as speak a common language.

Hence the descendents of Indonesians who are in Tanah Melayu escape the “pendatang” label.

Before the present-day national boundaries were drawn by English and Dutch colonizers, the Malay archipelago was regarded as an almost borderless Nusantara region.

Malays were adventurous seafarers who sailed from island to island.

The Firsters are probably too buta sejarah to be aware that even Philippine national hero Jose Rizal is regarded as the “pride of the Malay race“.

Norlin asks an interesting question: “Will a Chinese who relocates from Beijing to Shanghai be labelled as an immigrant (alien)”?

Methinks a Chinese from Beijing will not look too much out of place in Shanghai as compared to a Nigerian, say.

Shanghai has a population of more than 24 million.

Let’s do a historical projection. 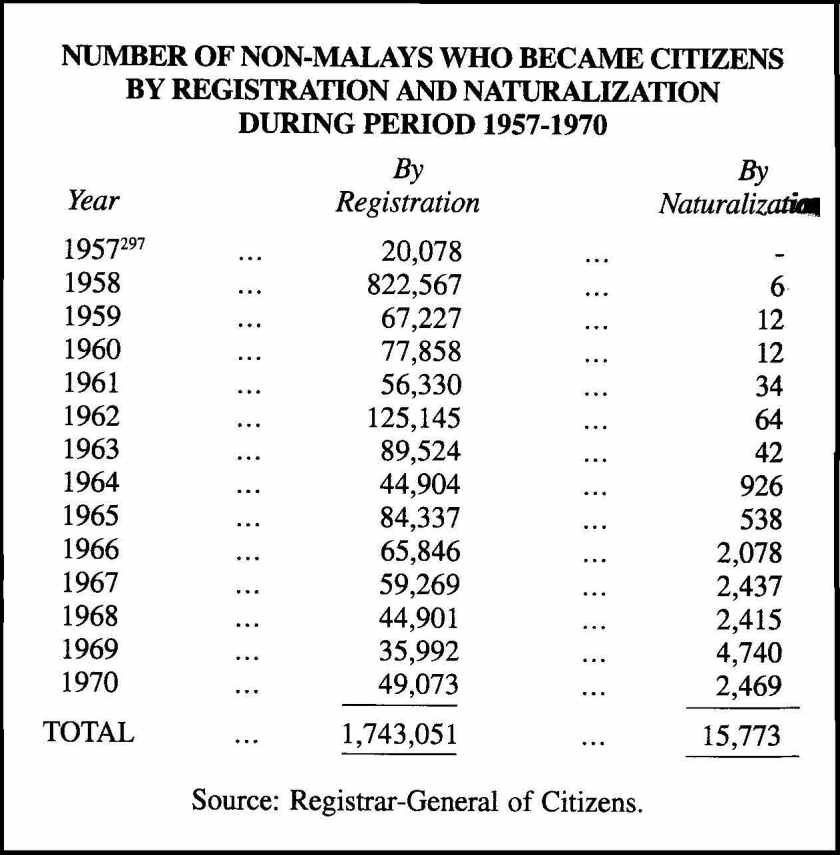 Would the Chinese race be as willing to accommodate non-Chinese in their country as the Malays here have done? Remember, more than 820,000 non-Malays acquired citizenship in a single year when the country’s population at that time was only 6.3 million.

If we use Shanghai as an example and employ the same ratio, it would mean the city suddenly allowing more than three million residents of a different skin colour – and who are unable to speak Chinese to boot – to overnight become China nationals that qualify to carry China passports.

Will the Chinese permit that to happen?

Yet the Malays and Umno are incessantly vilified

Hannah Yeoh retweeted Ambiga’s gripe (see above) about how “sickening” it is that “those who played divisive and racist politics are now talking about unity”.

The J-Star editorials similarly used the following phrase – “hate-spewing, divisive, race-obsessed ignoramuses” – and twice! within the span of a fortnight when the paper’s editors were bashing the racists.

Their favourite word “divisive” is employed by them again and again. Recall that Marina Mahathir’s Voice of Moderation poster chides those who are “dividing” the rakyat. 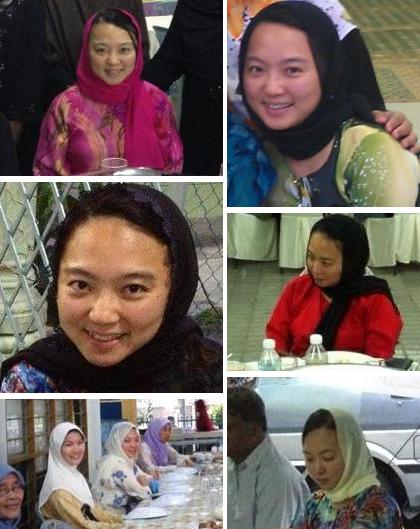 ABOVE: Some DAP fanboys dare to claim that the early Chinese immigrants wore tudung too and therefore we should not think that tutup aurat is exclusive to Malay women going to the surau

Staking claim on the term “moderates”

Even as their tudung and their Negaraku are at this very minute being appropriated, the Malays have to fend off the Firsters who have been urged to unite and together “stand up against religious and racial bigots”.

Is it really the Malays who have to be taught a lesson in order to keep Malaysia as a “moderate” country?

Or is talk about unity quite pointless and a waste of time because with some people, there is really no hope and no cure? 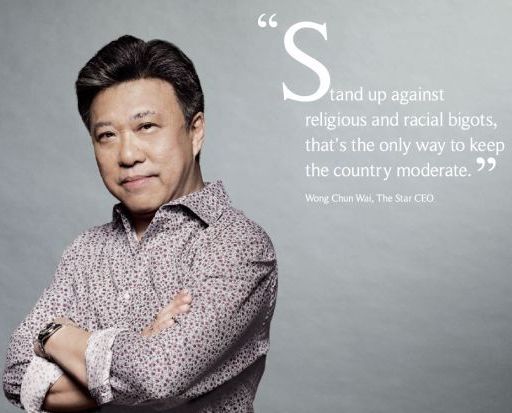 38 thoughts on “M’sia a better place if all Malays are like Marina, say Firsters”