In one corner of the ring, we have the Voice of Umno. And in the opposite corner, we have the Najib-inspired Voices of Moderation.

BELOW: Why is Najib listening to J-Star CEO Wong Chun Wai? 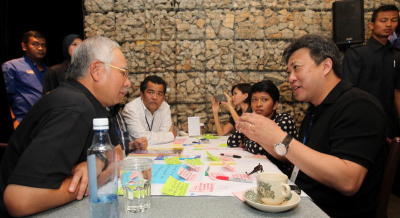 Out of the total of 191 Umno divisions nationwide, close to 85 percent so far have asked the Najib administration to keep the Sedition Act. Voicing support for maintaining the legislation are 161 Umno divisions as of Sept 4.

(By now, the end count should be higher than 161 with the feedback fully received.)

Speaking for Moderates camp are Idris Jala and Ramon Navaratnam whose commentary appeared today in the TMI as well as in Lim Kit Siang’s blog.

BELOW: “We must reject and fight extremism before it is too late!”, says Ramon in his J-Star ‘Voices of Moderation’ ad 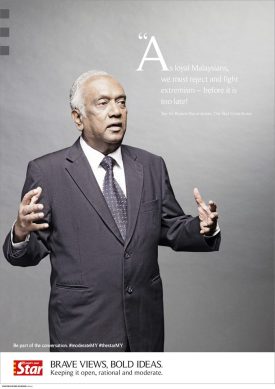 NUCC advising Najib on how to transform Malaysia

In his press statement today, Ramon said that “most thinking Malaysians are getting increasingly concerned with the rapid pace of sedition charges levelled at well-known and well-meaning Malaysian personalities and intellectuals”.

He also stressed the necessity of giving feedback to government “to help transform the economy and indeed our beloved country”.

It is a good thing that he is personally in an able position to do both, i.e. provide feedback to the government as well as help transform Malaysia. After all, the Tan Sri is a member of the National Unity Consultative Council (NUCC) that is advising our PM.

BELOW: Najib at the NUCC investiture 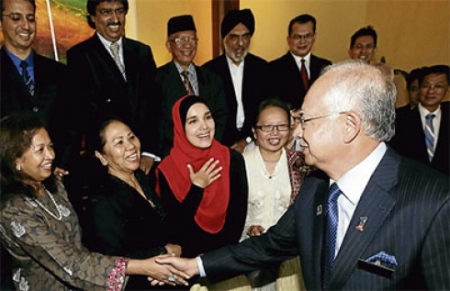 •  According to the NUCC’s Ramon Navaratnam, public reaction to the slew of sedition charges is “very critical and caustic”. However according to many Umno division chiefs, not only the Sedition Act should stay but the ISA ought to be brought back too.

•  According to Ramon, the considerably anxious public believe that the Sedition Act needs to be urgently revised or replaced. In fact, it is the NUCC legal subcommittee headed by Mujahid Yusof that has drafted its replacement. But according to one Umno fella, the name itself – “Harmony” Act – tidak menggerunkan pun and will not serve as any sort of deterrent.

•  According to Ramon, there is a “growing public perception of [the authorities] practising double standards and selective justice”. But according to the Umno grassroots, it is way past time that the police started taking stern action.

•  According to Ramon, the current harsh political climate will deter the growth and maturity of democracy in Malaysia. But according to the pro-Umno bloggers, giving democracy to the Dapsters is like giving flowers to a troop of demented monkeys.

•  According to Ramon, the present “sedition charging spree” is “not healthy for the peaceful, harmonious and socio-economic development of our nation”. The NUCC advisor further believes that this “heavy-handed use” of the Act will discourage foreign investors and give the international community a bad impression of human rights in Malaysia.

The contrary viewpoint to Ramon says that some Malaysians are behaving like berserk 800lb gorillas. So it’s kinda strange that they should want to demand “human” rights. (Urm, this is my own phrasing and not quoted from any Umno member.)

BELOW: Ramon Navaratnam rubbing shoulders with the PM 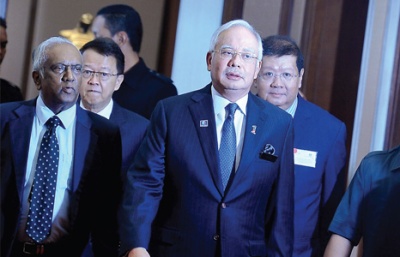 Ramon Navaratnam proposes a moratorium (suspension) on the sedition charges as well as a review and withdrawal of the ones which appear to be weak.

He also suggests that the Harmony Bills drafted by the NUCC be given greater priority for tabling in Parliament.

“Credibility and confidence in good governance can be jeopardised and we will all become uncertain and unhappy,” he adds, if the silent majority decide to stage protests against the sedition crackdown.

Ramon says that since “we all want to be happy, peaceful, progressive and united Malaysians”, so “let’s resolve to be more democratic”.

To sum up, Ramon is a J-Star “voice of moderation” who represents the NUCC views. His side of the political divide are projecting themselves as a progressive and democratic group that wants the country to have good governance and the races to be happy, peaceful and united.

On the other side of the fence is Umno that wants the Sedition Act to be retained. Umno is usually branded – together with Perkasa, Isma and Utusan – as racist, extremist, hateful and bigoted. 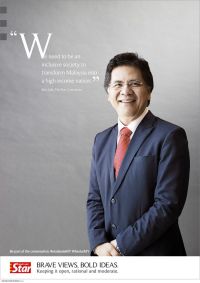 Transformation Minister is not Umno

Although he has a Malay-sounding name, Idris Jala is not Umno. For the record, he is a Sarawak evangelical Christian.

He is also a senator, which means he did not stand for election nor win a Parliament seat in his own right. Instead, Idris was appointed to office as the Transformation or ‘Ubah’ Minister. In his J-Star ad above, he outlined how to “transform Malaysia”.

As Transformation Minister, Idris controls a very big government budget in the Prime Minister’s Department. Nonetheless he does not have a bevy of civil servants nor the entire bureaucracy under his wing but prefers to hire outsiders – the highly paid consultants. 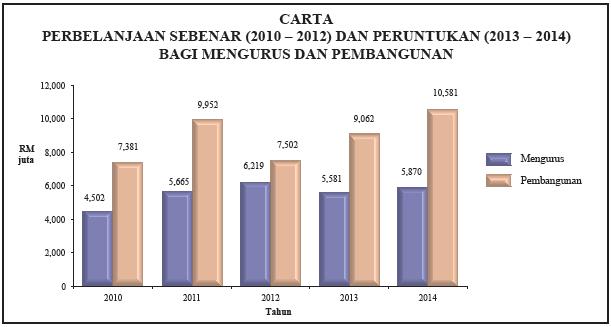 Calculation: Add the amount stated in the blue bar (chart above) to the amount in the beige bar for the year 2014.

Now that’s a cool 16.45 billion ringgit from the federal treasury that is available to the Prime Minister’s Department and a goodly chunk of it is overseen by Idris Jala!

What this shows is that Najib puts great store by his quasi-government, non-Umno consultants who congregate in his Ministry – the PM’s Dept. 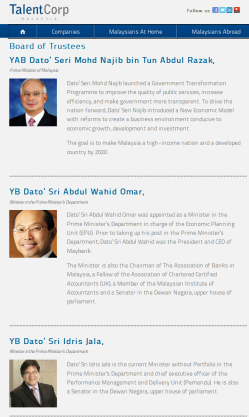 Reporting to him are, among others, Pemandu and TalentCorp – the latter whose CEO is reportedly paid a RM35,000 monthly salary inclusive of car allowance.

The Pemandu expenditure is humongous but rather complex … we can look into its details another time. For the present, I shall just mention the more straightforward TalentCorp expenditure which is budgeted at RM78,450,000 this year.

BELOW: One-off budget allocation for TalentCorp is RM58.45 million this year alone 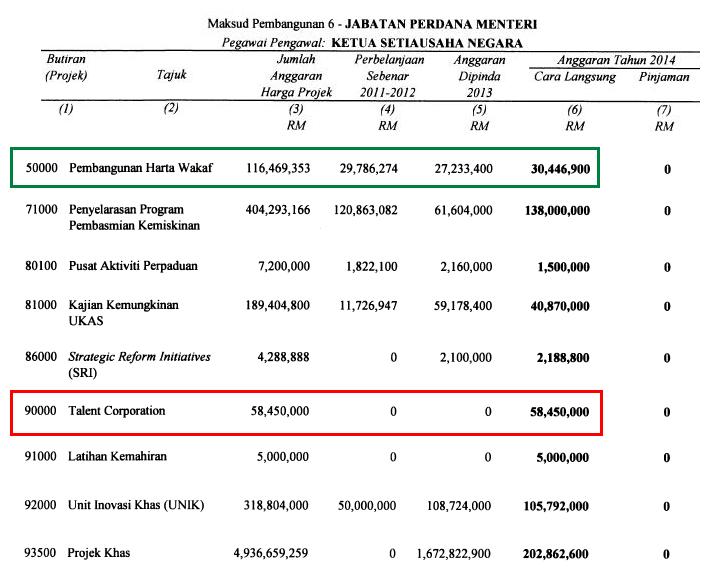 Do observe in the accounts sheet above showing the “one off” budget allocations given by the PM’s Department.

The TalentCorp folks have been holding their events – career fairs for fresh grads, professional talks, networking socials etc, for example, in Melbourne @ The Marriott hotel (below). 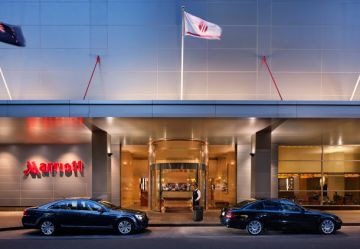 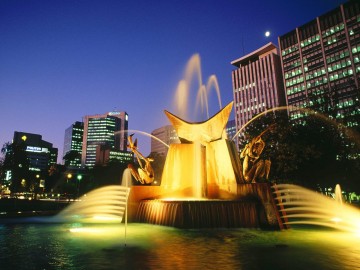 Other cities and hotels that have hosted the TalentCorp events

The rakyat greatly appreciate the tremendous efforts expended and the hardship suffered by your TalentCorp quasi-government agency travelling to all those far-flung places in order to bring home the Lost Sheep so that they can work and contribute their talents to the tanah air.

If you follow the money trail, then you can see where Najib is REALLY plonking his support. 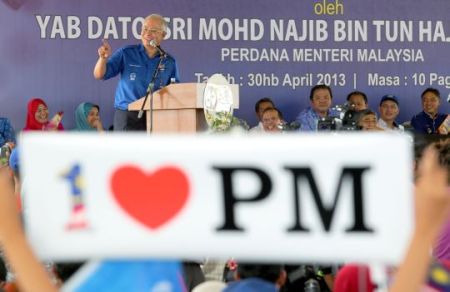 Lim Kit Siang in his press statement yesterday commended Transformation Minister Idris Jala for standing out as “the lone and courageous minister so far to speak out against the ‘white terror’ intensified in the past month using the colonial law of sedition to create a new climate of fear in the country after the Mahathir ‘Dark Age’.”

(Poor Tun. He is blamed for Malaysia’s DARK AGE in contrast to the evangelistas’ Goodness and Light.)

Idris has been vocal but the Umno Ministers with the exception of Khairy have been quiet.

“What about the other Ministers?”, challenged Kit Siang. 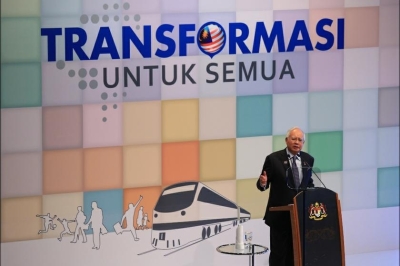 At the heart of the matter is who is Najib willing to listen to.

The Umno president appears to be accessible to people like Idris and Ramon, to J-Star CEO Wong Chun Wai (above) and to NUCC people like Saifuddin Abdullah.

But is Najib even a fraction as accessible to the party faithful such as the pakcik Umno life member in Gong Badak and the makcik selendang merah in Lubuk Merbau?

Think about it – the DAP’s aim is to Ubah. Najib’s objectives are Transformation. Now join the dots, heh heh heh 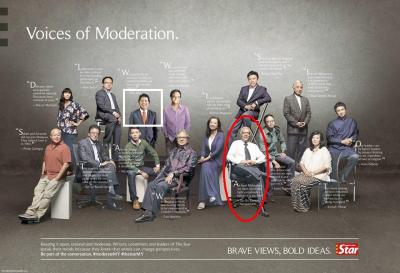 We are the BN voters, listen to us!

37 thoughts on “Will Najib listen to his penasihat or his party grassroots?”