You can refresh your memory by watching the Haris Ibrahim video below titled ‘PRU 13 : The ABU Message‘ on YouTube.

The 13th general election has come and gone and hence we have the benefit of looking back with hindsight.

The Asalkan Bukan Umno (ABU) movement had cautioned vigilance against the likelihood of phantom voters stealing our legitimate electoral mandate. Haris Ibrahim in the ABU video above had warned:

As we now know in the aftermath of the May 5 tsunami (the video above was released in April a month prior to GE13 polling day), some dark-skinned people caught in the vicinity of the voting centres were unfortunately beaten up by street mobs.

In the video above, Haris told “foreigners who have been given MyKads” that they have been warned and that the ABU squads to patrol all polling stations will deal with them should they defy his warning.

So was it the ABU vigilantes who had beaten up the dark-skinned individuals whom they suspected to be “foreigners who have been given MyKads” trying to cast a vote?

Oh lemme guess. The ABU vigilantes have since been absorbed into the bajungu. 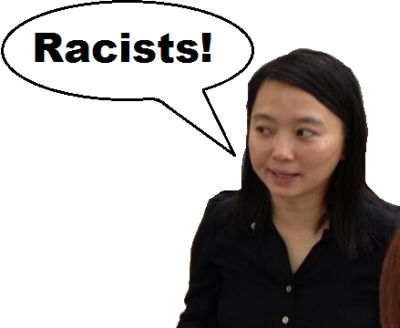 They failed to ABU this country

Haris started his message to the rakyat with the greeting “God’s peace be with you”.

He then explained the ABU message of change as meaning “the people must come collectively together, overcome the politics of race that Umno and BN have for so long planted in our midst, and we must as one people vote to bring in a new regime”.

Hmm … so this nation of ours, till today, remains sadly un”saved” lah for the sheeple because clearly ABU has not succeeded. Umno still remains the biggest party in Parliament and what sore losers the ABU-ers have been.

At minute 1:50 of his ABU video, Haris reminded GE13 viewers, “the material that ABU has come out to combat the media war with Utusan Malaysia and the TV stations owned by Umno-Barisan Nasiona have all been uploaded on the ABU website”.

He urged ABU supporters to upload, print and distribute the materials to the voters in the villages – balik kampung bawa berita – as part of their effort to bring about the Change they all desire.

I just checked http://www.asalkanbukanumno.com and it appears that the domain name has lapsed. Thus their ABU material detailing how much pain, misery and untold suffering the ancien regime has caused the people is no longer available.

Their ABU struggle barely lasted a year, it would seem. Such a LACK OF STAYING power and stamina.

BELOW: Utusan is the Pakatan’s public enemy 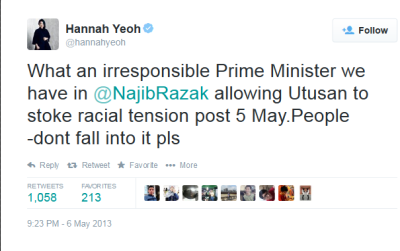 ABOVE: Hannah Yeoh’s opinion that Najib is an “irresponsible Prime Minister [in] allowing Utusan to stoke racial tension post 5 May” was retweeted 1,058 times. There’s sure a lot of sheeple out there 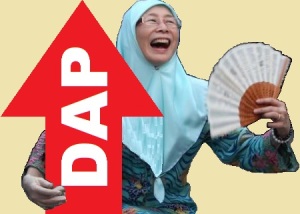 At 3:58 of the video, Haris issued an ultimatum to the Pakatan coalition: “We expect you to put the interest of the rakyat before the interest of your respective parties. We do not want to see parties squabbling for seats”.

Squabbling for seats only? The reality one year down the road presents a much worse scenario. They’re squabbling for the Selangor menteri besar ‘throne’ and the state’s RM3 billion Porky Fries … ooops, I meant piggy bank.

And worst of all, we see the PAS ulamas crying that their purported allies are slandering them – men of the cloth. Even the PAS ulama are complaining about their PKR and DAP coleagues. Now how much lower can the 3G ‘G’reedy buggers go? 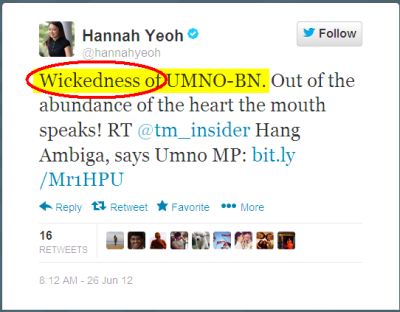 They so very despise Umno-BN, their contempt is dripping buckets

Ubah-Change for the better under Pakatan?

Where got lah? It’s the same old, same old. After they got power in 2008, like that lah and after they retained power in 2013, more of the same.

In fact, you all should take a drive to Penang island and see the new tourist attraction of Botak Hills brought to rakyat Pulau Pinang by the Developers Above People party.

In the video, Haris warned “Pakatan and the other non-BN parties that will be facing Umno in this coming election”:

Aiyah, where got lah the rakyat take to the streets? What we see most on the Selangor roads are potholes. 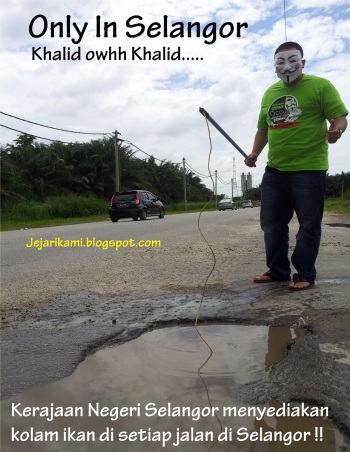 ABU promised to take their message of Change to the voters urging everyone to “overcome the politics of Race”, and to fight to usher in “a new regime”.

ABU swore that by God’s grace, they would topple the Umno regime.

Urm, isn’t it apparent that God loves Umno more than he does the Yahudi Yeohs because, after all, the “racist” party and their BN cohorts remain in power and sitting pretty.

And ABU threatened any potential frogs (opposition-elected Aduns, MPs) that they had better be prepared to leave the country if they ever dare to betray the voters’ trust by allowing themselves to be bought over by Umno.

Well, let’s see who leaves the country. I don’t think it’s gonna be the BN leaders as envisaged by Haris in his poster below.

Blasts from the past: