righteous:
“Ridhuan Tee, free ah, this Sunday? We go good Klang ‘Bah Kut Teh.’ I belanja. Wasalaam.”
.
AkuMelayu-tetapi ABU jugak:
“righteous, sorry to inform you that this Celup is not too much into Bak Kut Teh… Char Siew (not the chicken type) is more of his forte.. Heard he eat lots of them together with the Siew Yuk…”
.

Screenshot are two comments by Malaysiakini readers taken from an article in the portal yesterday titled ‘Ridhuan: Nobody defended me on my sedition probe‘.

Abusive remarks about Cina mualaf (and mamaks) coming from the puak Yahudi Yeoh is par for the course. However in this particular case, both the vituperative comments reproduced above are from ostensibly a Malay calling himself “AkuMelayu” and a Muslim calling him/herself “righteous”.

The Malaysiakini subscriber ‘righteous‘ who signs off with “Wasalaam” mocked the Chinese convert with an invitation to eat the famous Klang Bah Kut Teh, and promising to belanja him.

AkuMelayu followed up by by alleging that the said Chinese Muslim, whom he terms a Melayu celup, likes to “eat lots of [Char Siew] together with the Siew Yuk”. (Char Siew is barbequed pork and Siew Yuk is roast pork.)

The above exchange in the Malaysiakini comment thread illustrates how much pig and pork have become part and parcel of our political lexicon. Especially with the opposition supporters, Porky Fries is not only the choice argumentative vocab but the sole political language that they understand.

BELOW: “Try the Porky Fries, Hannah” 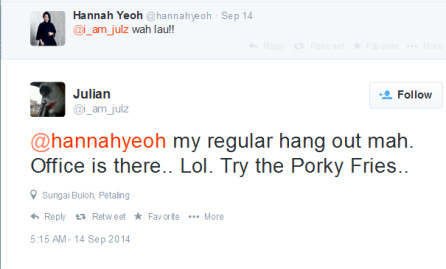 An invitation for Muslims to buka puasa with Bak Kut Teh was what landed the sex bloggers Alvivi into trouble with the law.

Needless to say, the Yahudi Yeoh who are champion at putar belit spun it to say that the Bak Kut Teh could have been chicken or “organic vegetarian”. We’re well aware that these people are capable of saying anything.

Similarly the Facebooker Chow Jack (below) was sentenced to a year’s jail under the Communications and Multimedia  Act also for his taunt calling upon Muslims to gorge on Bak Kut Teh before Ramadan starts.

The DAP boasts that the party has introduced New Politics which leaves its old, belligerent ways behind. Oh really?

Karpal’s contemporary is Lim Kit Siang who is still very much around although another slightly younger peer in Old Politics, Anwar Ibrahim (photo below), will soon be put away.

Let’s pause a minute and look at the barisan pelapis of the DAP – see below. Do they approach politics any much different than their mentors? 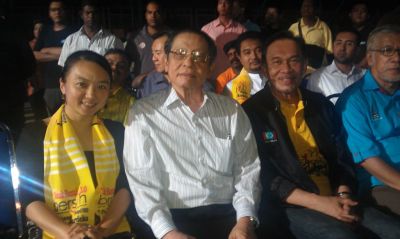 I seem to have made one mistake. Wee Ka Siong, top row far right in the montage is not from DAP. But then again MCA is DAP is MCA is DAP.

Some of the personalities above are notorious, for example Ng Wei Aik who was Guan Eng’s former political secretary and has a samseng reputation, Hew Kuan Yau who is nicknamed ‘Superman’ and known for his foul mouth, Anthony Loke who rubs the Malay right wing the wrong way, and Andrew Chin who was questioned by police for the (‘Najib’) kangkung-stuffing protest.

Despite all the posturing about New Politics, the DAP politicians still call their opponents the most nasty names and their supporters behave much worse.

Initially the individuals at the receiving end of the most vitriolic tongue lashing were the MCA leaders – Dr Chua Soi Lek easily comes to mind as getting the worst of it – who were labelled “running dogs” and other derogatory epithets.

Then the Dapsters cast their net wider and soon public figures like Ridhuan Tee were targetted. Cina mualaf and mamak were the most vulnerable groups being called “running dogs” and “snakes”. If you were to ask me – “Why are they like that?” – I will probably attribute it to Bapa borek, anak rintik (they follow their leaders and DAP are the masters of the Politics of Hate and Hypocrisy).

The hypocrisy bit comes from all the ‘Love’ dripping from their mouths and their mouthpiece the J-Star pointing an accusing finger at the “hate spewers” – purportedly other folks but never they themselves.

Presently, the PAS ulama and leaders are the targets of the YY attacks. It is so bad that the president of the Islamist party complained about the slanderers at the recent muktamar. Tuan Guru Hadi Awang was moved to devote a few passages of his keynote address to chide the people whom he described as “sudah hilang punca”.

The people mentioned by TG Hadi are emphatically not peace-loving nor meek and mild, and they’re certainly not showing any ‘lurrve’ for their neighbours (or even their own Pakatan bedfellows).

That they’ve now taken to insulting the ulamas and asking an ustaz to eat Bak Kut Teh (inasmuch as the YY dislike Ridhuan Tee, he is nonetheless regarded as an ustaz), it is taking their thuggery to an altogether ‘higher’ level.