It is Putrajaya that lives in fear, said Marina Mahathir in her ‘Hard Talk on Human Rights’ at a conference in KL yesterday.

“Fear of chaos is only up there in the government. The rest of us are not scared,” she added.

Marina said this in response to the question whether the Sedition Act 1948 must be repealed. The Malaysian Insider reported Marina as saying that Putrajaya was wrong in using the law on the pretext of preventing chaos.

“Young people are not scared and the law will not deter them,” said Marina. “Are they [the authorities] talking about a pre-emptive strike, and did it work?” – TMI quoted Marina as saying.

She was speaking in a plenary session titled ‘Freedom from Fear – Is it a Basic Human Right?’

Marina was a co-panellist together with Paul Low (a staunch Christian) who is Minister in the PM’s Dept, Gan Peng Sieu the former MCA vice president, Tommy Thomas, a well-known lawyer, and Jahabar Sadiq who is CEO of the notorious and noxious, spindoctoring portal TMI.

Their session at the International Malaysia Law Conference was moderated by ‘Negara Ku’ founder Ambiga Sreenevasan.

BELOW: The Metro Tabernacle Church in Desa Melawati, KL was torched in January 2010

Citing an episode which could have been manufactured to create fear, Marina pointed to the spate of church arson and firebombings following the High Court decision on the ‘Allah’ case brought by the Titular Roman Catholic Archbishop of Kuala Lumpur.

“Some people wanted to burn churches, but Malaysians did not buckle,” she highlighted.

According to the TMI article, Marina mentioned Perkasa as enjoying special treatment.

She was also quoted by The Malay Mail as saying, “Utusan has complete freedom to stir up fear in everyone, whereas the rest of us are trying to reassure everyone”.

BELOW: Marina giving flowers to pastor in church

On the other side of the political fence, Perkasa president Ibrahim Ali said his organization would “defend to the death” the Sedition Act. The Malay right wing holds that the Sedition Act remains the only law available to preserve our peace and safeguard public order following the repeal of the ISA.

Umno divisions throughout the peninsula almost unanimously want the Act to be retained.

The Malay Mail reported that Perkasa was also demanding for the ISA to be reinstated.

“It is actually more to protect the Chinese and Indians”, Ibrahim said of the security legislation which has been abolished by our “lembik” (the Tun’s word) and “liberal” (Ibrahim Ali’s word) Prime Minister in his bid to woo the so-called ‘moderate’ electorate. 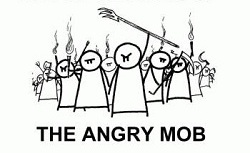 “It’s not like he even got the votes,” noted Ibrahim with regard to what he called Najib Razak’s “politically-driven decision” on the ISA, which was among the PM’s various initiatives under his administration’s Transformation drive.

Ibrahim Ali told an ISA forum on Sept 20 that Putrajaya must restore the ISA to shield the Chinese and Indians from Malay anger.

He added that without the ISA, the non-Malays are making free to insult the Malays. This is making the Malays very angry and their tolerance is already close to snapping.