In his speech at the MCA general assembly, Najib Razak gave the delegates an assurance that the Chinese education stream would not be disturbed.

However the BN chairman added one caveat. He said to the BN’s anchor Chinese party members that they all have to make an effort to learn our country’s national language.

See the J-Star report ‘Feel-good factor is back in MCA’, filed by the paper’s senior editor Foong Pek Yee (screenshot below).

“But I want you all to make an effort to learn Bahasa Malaysia,” he said, to which the delegates responded: “Boleh!”.

The fact that Najib had to make this request at all infers that those MCA people sitting in the dewan at Wisma MCA do not know BM.

Now, why are they BM illiterate, so much so that they require the Prime Minister to cajole them to learn the language?

Well, because they’re victims of racism, that’s why! Umno is so racist!!

How is Najib going to communicate with the one million Malaysians – MCA members – who are unable to speak BM?

To prove his credentials as a real moderate as well as to allay Chinese fears that he and his party are not becoming even more extremist than they already are, Ah Jib Gor must make an effort to learn Mandarin.

By speaking Mandarin so that he can reach out and be understood by the MCA people, Najib will be displaying his sincerity in building bridges to unite the races.

And to prove how inclusive and caring and sharing we minorities are, on our part, we’re willing to give Rosmah a Chinese name too. 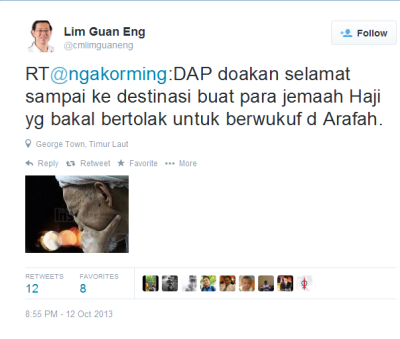 On this date last year, I wrote that baling batu sorok tangan is the style of the evangelistas.

The DAP Born Again politicians will wear tudung singgah masjid, stir empty cooking pots in the surau, declare that they puasa during Ramadan and in the case of Lim Guan Eng, tweet wishing the jemaah Haji a safe journey to Arafah – see screenshot above.

It was Guan Eng who had exacerbated the ‘Allah’ controversy through his Christmas message but when the court judgment on the Herald ‘Allah’ case was made known on 14 Oct 2013, he dodged the issue as if he had nothing to do with heightening the religious tensions.

On this date two years ago, I blogged about how Sarawak is a Christian-majority state – see table and pie chart.

I also wrote that Penangites prior to Merdeka had viewed themselves as subjects of the British crown while resisting the idea of their Straits Settlement becoming a part of Persekutuan Tanah Melayu 1948.

The Chinese in Penang preferred to secede.

According to a history book I cited, “on 4 Dec 1948, the Penang Straits Chinese British Association voted for a policy of secession, and this was unanimously backed by an emergency general meeting of the Penang Chinese Chamber of Commerce on 12 Dec 1948.” […]

The Penang Chinese were most preoccupied with maintaining their link to Singapore.

Bob Teoh had derided, “Who is this Helen Ang?” – in the sense of sengaja dipandang enteng saya (see screenshot below).

That’s the kind of people the evangelistas are, especially their pastors. No surprise that his fellow lay pastor Hannah Yeoh likes to go around labelling people “low class”.

Well, at least I’m someone who uses my own name and am willing to have my identity revealed to the public. The sneaky evangelistas, on the other hand, are everywhere under different guises. They even put their comments disguised under Malay names or Muslim names.

Muslim NGOs right to be fearful and suspicious

The evangelistas, most unfortunately for the rest of us lesser endowed Malaysians, are in possession of immensely rich resources and a wide professional network.

They also control the English online and social media. And the J-Star too, needless to say.

Who is Bob Teoh? Well, see below. His article article titled ‘Time to say no to racism’ is reproduced in Kit Siang’s blog.

You can also Google his name and the word ‘Allah’. He has written a lot about the controversy to try and justify why the Christians must be allowed to co-own lafaz Allah.

23 thoughts on “Why Ah Jib Gor must learn Mandarin”