Does anyone wanna make a shrewd guess as to what bombshell (or atomic bomb) the Tun is going to drop in his explosive speech that he has promised to deliver at the Perkasa gathering this Nov 23?

It looks like Najib Razak’s very expensive media advisors and image consultants will need to be working overtime.

Salleh: “Only Umno can make itself irrelevant”

In relation to Najib’s theme of Moderation,

I’d like to address an article titled ‘Umno’s future is in the centre‘ by former Sabah Chief Minister Salleh Said Keruak (pix).

This rightward drift is enabling Perkasa and Isma to take centrestage, Salleh wrote, adding that the right-wing groups “have an alarmingly high following”.

Salleh believes that for Umno to stay relevant and in power, the party would need “to move more to the centre”.

The Sabah Speaker concludes with the caution: “Umno ignores this fact at its own peril. The opposition cannot make Umno irrelevant. Only Umno can make itself irrelevant. And this should be what guides the Prime Minister and not the voice of those who want to see Malaysia return to the pre-1969 era.”
.
BELOW: Funeral street procession by opposition Chinese through KL on 9 May 1969

About Najib Razak trying to move more to the centre, Salleh Said Keruak is correct. However the PM’s 1Malaysia has been torpedoed and sunk. Who else do we see, besides the Boss Man himself, who is willing to promote this cousin concept to PAP’s “Malaysian Malaysia” and DAP’s “Malaysian First”?

And not only that, 1Malaysia has been mocked and scorned by DAP since Day One of its inception. We can take it that with the Dapsters, the formation of a Malaysian identity must be solely on the terms of their party and anything else (such as Najib’s 1Malaysia) which is outside DAP-framed Firstness will be spat upon and beaten up. 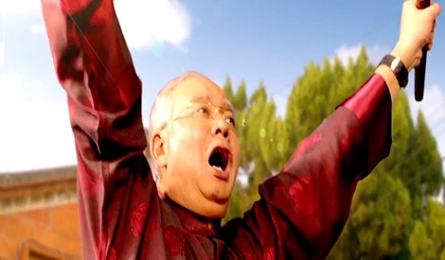 About Umno wanting to move more to the right, Salleh is similarly correct. Nonetheless, the issue before us is whether the party chief can remain in his post when he is adamant on going in the opposite direction to his party’s wishes.

From history, we know that Umno president Dato’ Onn Ja’afar had to leave the very party he founded when he wanted to open up Umno to the other races but his resolution failed to be endorsed by party members.

And mind you, Dato’ Onn was someone greatly respected by the Malays and who commanded the personal loyalty of party strongmen such as Panglima Bukit Gantang and Dato Nik Ahmad Kamil. Nonetheless his career in Umno ended because he was not on the same page as his party grassroots.

PAS president Mohd Asri Muda (pix) too resigned after he was heckled “murakbar” at his party October 1982 muktamar. Asri was the leader who took PAS into Tun Razak’s BN rainbow coalition and under his watch, the Kelantan PAS-Umno unity government was established.

But due to the losses sustained by PAS in the April 1982 general election and the anti-Umno sentiments among members as well as the Kepimpinan Ulama ethos that had supplanted his own nationalistic credo, Asri was forced to leave the party.

People today tend to forget that PAS used to be even more Malay nationalist than Umno and in their Who’s Who gallery of nationalists was Asri’s immediate predecessor – Dr Burhanuddin Al-Helmi. Succeeding Asri as party president was Yusof Rawa, his deputy who was an ulama and responsible for setting PAS on its current theocratic trajectory.

Interestingly, Lim Chong Eu was another president who had to leave his party in 1960. Lim resigned from MCA not long after the 1959 general election and went on to form UDP and later Gerakan. His short stewardship of the party was tumultuous and Tunku was more than happy when Tan Siew Sin took over.

Coming back to Najib’s predicament, those in the party preferring to “move more to the right” include the Tun (call him Zeus), other Tuns, Tan Sris and power brokers and shadowy financiers.

Najib, guided by his unpopular Pemandu, is swimming against tide of the party. No individual is bigger than the collective in Malaysian politics, not even the great and beloved Dato’ Onn.

Dr Mahathir Mohamad is not bigger than Umno either. In 2006, he failed to be nominated as a party delegate to the Umno general assembly for his own division. Believe it or not, Dr M finished in 9th spot out of the 15 candidates vying for a total of 7 places to represent Kubang Pasu at the PAU.

The reason Tun’s voice can be so influential today is only because he is expressing the will of the Malay ground. As a doctor, he is trained to read the pulse. Umno members want Umno to be parti Melayu, not parti Anak Bangsa Malaysia led by a glocal president sporting a Chinese name and preaching global moderation.

Understand that Dr M is a gale force nine because he is riding on the storm that’s hitting Najib. Tun did not create the atmospheric forces that are whipping up the anti-Najib hurricane. Najib does that fine all by himself.

Salleh Said Keruok argues that for Umno to continue to be relevant, the party is required “to move more to the centre”.

Pardon me for saying but Salleh is a Sabah politician and his chapter of the party is the youngest. Umno Sabah was formed in 1991; Sabahans have missed out on 45 years of Umno’s earlier existence.

Borneo and peninsula politics are just not the same. Sarawak, for example, bars the entry of Ibrahim Ali and a host of other politikus-politikus Semenanjung into their state.

Now let us examine Salleh’s argument that “the nationalists, Islamists, and so on” would be unhappy with the centrist direction in which Ah Jib Gor is taking Umno.

My dear sir, would you prefer that Najib make the globalists/internationalists/Sino-centrists and the Christians happy? And make the Perkasa and Isma crowd unhappy instead?

Furthermore, I fear that if Umno does not redeem its nationalist credentials, the members will revolt. 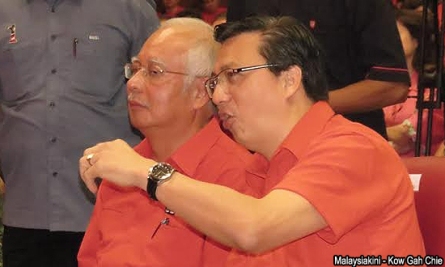 How should the PM be guided then?

Salleh Said Keruok advises that Najib should not be listening to “those who want to see Malaysia return to the pre-1969 era”.

For the sake of argument, I shall assume that by his cryptic remark about “pre-1969”, Salleh is referring to the Harun Idris-type of politics.

I’m not someone who has any memory of the May 13 experience but the last few years of the DAP’s ascendancy has certainly allowed me to imagine how provocative the Chinese would have been in May 1969 – telling the Malays to balik kampung, tanam jagung and calling them “low class”. 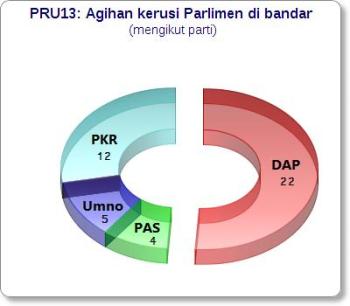 Why is Umno perceived as weak?

Umno has 88 Parliament seats and the DAP 37 (after its recent loss of Teluk Intan in a by-election). Yet Umno does not act like it’s 88 whereas the DAP is charging about like a bull in the China shop.

Recently Dr Mahathir lamented: “What has happened to Umno? It seems weak and not able to recover to rule Selangor again.”

For the first time in Malaysian history, Umno has lost Selangor and for two consecutive terms. Losing Malaysia’s most developed state has relegated Umno to become a “kampung party” and allowed the DAP, with some help from PKR and PAS, to exercise a thorough control over the towns.

BN’s hold on Putrajaya is becoming increasingly untenable without wresting Selangor back.

BELOW: In 1969, Gerakan was an opposition party

In our present political calculus, moderation simply will not work.

You can only be moderate if you’re dealing with rational and reasonable people. The DAP supporters are neither. They’re Bintang Lima (evangelistas) who have evidently inherited the saka of the Bintang Tiga (communist guerrillas).

Najib has been premier for more than 5-and-1/2 years. We’ve witnessed how his offering of olive branch to the non-Malay opposition has not been reciprocated. His efforts at reconciliation are rebuffed as well.

“Insanity is doing the same thing over and over again and expecting different results.” – Albert Einstein

President who is not in sync with party

The Umno divisions almost unanimously want the Sedition Act retained. This indicates that Umno is on the backfoot. You can infer that Umno is being defensive because they are constantly under attack. An opponent who never ceases to attack and refuses to parley is far from “moderate”.

Attempting the moderation approach with the DAP is like inviting Chin Peng for weekly Teh & Karipap at Seri Perdana.

The biggest threat to Umno is not Anwar or PAS or PKR nor DAP. It is the Malay electorate who are getting very fed-up with the Umno president.

Instead of fighting his political enemies, Najib is fighting his own party. Umno wants the Sedition Act to stay. So does deputy president Muhyiddin Yassin. So do the Umno totems. This is just one example of how Najib is not in concert with Umno.

There is a saying: Let the punishment fit the crime.

In the case of BN politics, Umno’s approach must be tailored to suit the opponent it is confronted with. The Yahudi Yeohs do not understand the language of wasatiyyah. Therefore Najib’s moderation is wasted on them.