This photo is Hannah Yeoh.

In which community do you find …

… nestled among the pimps

In short, who are the kingpins of organized crime in Malaysia?

The photo above shows a commercial district in Subang Jaya.

Those mattresses being thrown away do not come from residential homes. They were discarded by one of the businesses that operate along the row of shophouses.

Now what kind of business uses a cheap bed?

Daim: Who is funding oppo parties?

Talking about the opposition, Tun Daim Zainuddin asks, “who do you get funds from to run the party or contest in elections?”

The former Finance Minister was speaking at an event hosted by MIDF on Thursday (Nov 6). “Truth is, business and politics are like Siamese twins – inseparable and inevitable,” said Tun Daim in his speech to a 200-strong audience at Istana Hotel in KL. 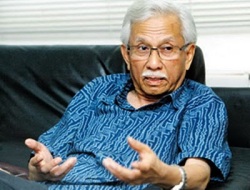 Specifically, he pinpointed the hundreds of foot “reflexology” centres that have mushroomed in Selangor ever since Pakatan took over the state.

“You know what happens behind closed doors at most of these reflexology centres,” Astro Awani reported Tun Daim as hinting.

The Umno stalwart further said that this flesh trade in Selangor’s sin cities are linked to certain personalities in the state government.

The Porky Principle states “Bak Kut Teh is not pork”

e.g. Application of the Porky Principle:

Declaration that the intimate photos of ‘Zairil’ with ‘Dyana’ are forgeries by Umno cybertroopers. Zairil threatened: I might take legal action against anyone who says the pictures are of me (and Dyana Sofya).

Yet they’ve chickened out from lodging any police report, filing any libel suit or confronting any blogger/Facebooker whom they accuse of gutter politics.

Subang Jaya has been successfully taken for Jesus.

However, the hijab image with which the Jerusubang Adun drapes herself is most ironic considering the reputation of Hannah Yeoh’s constituency as a sarang maksiat.

In earlier days, Our FirstLady Speaker donned the gauzy selendang but nowadays she’s going for the black tudung. See the photos tweeted by her own self and her MPSJ associate.

If one is continually photographed in mosques and suraus wearing tudung, then it is a logical assumption that the individual has embraced Islam.

An ustaz had asked in Facebook whether Hannah Yeoh (pix left) is a Muslim. Mind you, he is not a politician from any rival party nor a political operative. As a ‘man of the cloth’, he wanted only to satisfy his curiosity and allay his concern.

There is nothing criminal about merely desiring to clarify the religious status of Our FirstLady Speaker. Given the circumstances, it is the most natural thing to query. Nothing extremist, racist or bigoted about the ustaz’s question.

Instead it is Hannah Yeoh’s threat to lodge a police report against anyone (who even whispers she has converted to Islam) that smacks of extremism and religious bigotry.

BELOW: What is one reasonably supposed to make of Hannah Yeoh’s tudung wearing?

Targets labelled ‘extremist’ by The EvangeliSTAR

J-Star CEO Wong Chun Wai rants and raves yet again at his favourite target, i.e. the racists-extremists-bigots-haters whom he deems “self-proclaimed race and religious champions”.

“Uncouth personalities”, he calls them in his newspaper column today and many times previously. However Chun Wai now chooses to cast his eye beyond the usual suspects – the MP “circus acts” who he says entertain him with their clownish antics in Parliament.

In his latest article ‘Stop the circus acts‘, the uber evangelista is extending his ire to “the increasing number of voices outside the mainstream political arena who are challenging the accepted norms of public discourse with their strident and extremist views”.

Oh, so now ordinary Malaysians are labelled ‘haters’ too

The J-Star is giving TMI a fight for its money as to which pro-Christian publication is numero uno in naming and shaming the despised “extremists”.

EvangeliSTAR boss Chun Wai writes that “the increasing number of personalities and ordinary Malaysians, of all races, spewing hate comments is seriously worrying”.

Although by his reckoning these hate spewers are nothing but “political weaklings”, he still feels that these weaklings nonetheless deserve his column inches – and the attention of the millions of eyeballs reached by the MCA multi-billion ringgit media empire – week after week.

BELOW: Chun Wai’s campaign against “religious and racial bigots” indirectly funded by the PM’s Dept?

Referring to those he does not see eye to eye with, Chun Wai claims that the “easiest way out, to make up for their lack of grey matter, is to continually spew remarks that intimidate or instil fear among the people”.

In other words, Chun Wai is accusing the purported bullies of stupidity. And because they’re stupid, they have to resort to constantly scaremongering – goes his logic.

“In any democracy, we can expect such an approach from the really fringe groups or ultra lunatics whose views are often ignored. But it is sad that in our country, political bullying gets national prominence, whereby certain groups and individuals with their political links not only shout down those who do not share their views, but also play the race and religious cards to threaten them.”

To sum up: Chun Wai is saying that the alleged fear-mongers, whom he uses the MCA platform to heap ridicule on, are not only stupid but are the lunatic fringe. He is also saying the “ultra” groups (that are politically linked) are shouting down their meek and mild fellow citizens as well as threatening all peace lovers who do not belong to the same race and religion.

Rounding up, he vents at the politicians “who think they are the only ones who shape and decide Malaysia’s future”. Chun Wai suggests that these politicians “need to see their shrinks quickly. They need serious help”.

That’s a lot of serious venting coming from the EvangeliSTAR. By my reckoning, the politician who is extremist and a religious bigot is Hannah Yeoh.

My opinion is hardly shared by the J-Star editors who are Hannah Yeoh’s biggest fans. Who do you think are the politicians targetted by Wong Chun Wai whom he says “need to see their shrinks quickly” because they “need serious help”?