Yesterday’s police report against 1Malaysia Development Bhd by an Umno division leader is a first strike against Najib Razak who is 1MDB board of advisors chairman.

Khairuddin reportedly told the press that not just he alone but Dr Mahathir Mohamad too is disgruntled with 1MDB. 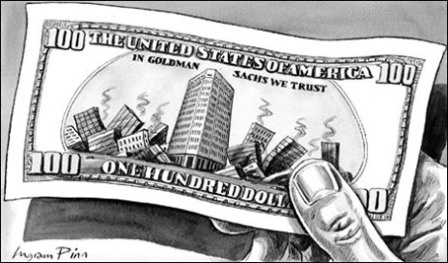 Che Det last week expressed his disappointment that the top Umno leadership did not respond, during their party general assembly, to pressing public queries on the 1MDB.

In his Dec 5 blog entry titled ‘Mesyuarat agung Umno’, Tun asked why was 1MDB making investments or keeping money in the Cayman Islands which is the centre of operations for hedge funds and currency trading.

Dr M reiterated that 1MDB had grossly overpaid in buying power stations and is servicing the purchase loan at the highest interest rate ever to be charged the government. He also questioned the astronomical 11 percent commission to consultant Goldman Sachs. 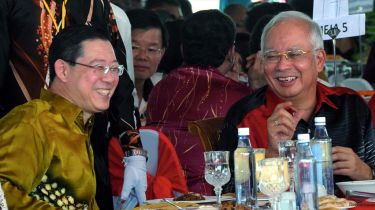 Khairuddin has cautioned that if necessary, he will take further action through a follow-up report to the Malaysian Anti-Corruption Commission to question the PM on 1MDB in his dual capacity as Finance Minister.

The opposition has dubbed the Najib-linked company as the “mother of all scandals” but it is Tun who’s providing the impetus to unraveling the financial web woven by 1MDB. Previously the controversy was only discussed on the periphery.

It is Dr M who brought the interrogation into the mainstream. 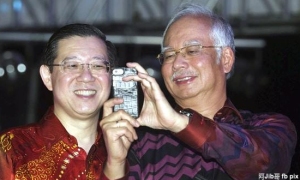 Ibrahim Ali has complained about the bullying by The J-Star and the media group CEO Wong Chun Wai, reported FMT today. Ibrahim accused the EvangeliSTAR of fueling the incessant criticisms against Perkasa and Chun Wai for personally launching scathing attacks on his good self.

In fact, the entire EvangeliSTAR machinery is firing up its so-called ‘Moderation’ campaign to bully opponents whom it labels as “racists”, “extremists” and “bigots”.

Ministers in the PM’s Dept Joseph Kurup and Jamil Khir Baharom don the J-Star ‘Moderation’ T-shirt – how much funding is the PMO giving the EvangeliSTAR? Please answer 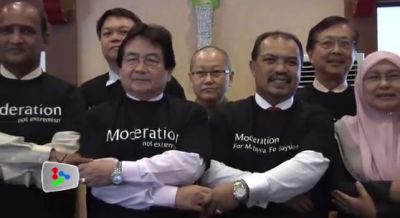 “Extremist, immoderate and intolerant voices as represented by Perkasa and Isma do not speak in our name,” said Noor Farida Ariffin about the open letter by 25 ’eminent’ Malays to the people of Malaysia.

“Given the impact of such vitriolic rhetoric on race relations and political stability of this country, we feel it is incumbent on us to take a public position,” SIS co-founder Noor Farida, who is the lead letter writer, added.

If Ah Jib Gor had not let the DAP evangelistas spiral out of control, Perkasa and Isma would never have gotten any traction. As one example, the DAP evangelistas are going on a rampage over the kalimah Allah and the Chief Minister of Penang is hellbent to cari penyakit.

.
Things are falling apart mainly due to Ah Jib’s weak leadership and the self-destructive Transformation projects he has embarked upon, such as 1MDB, Pemandu and TalentCorp.

Self-professed “moderates” lay the blame for our social instability squarely on the shoulders of Perkasa, Isma and their ilk. In truth, it is these self-proclaimed “moderates” who are the trouble-making provocateurs.

There’s a lot of finger-pointing going on but the rot starts at the very top and the buck stops with No.1. Ultimately Ah Jib’s misplaced ~ so-li-da-ri-ti ~ with reckless liberals and Christian extremists reeks of a suicide mission.

One of Ah Jib Gor’s pandering to the “moderates” takes the form of the National Unity Consultative Council.

A brainchild of Najib’s consultants, NUCC is meant to “foster national unity and social cohesion”. However, not only has the NUCC failed to achieve its stated objectives but the “moderates” body has had the opposite effect.

Apart from not commanding respect, NUCC has sputtered and stalled. Its website home page has not been updated the last five months – see screenshot above.

Feeling under siege? Hell, ya!

Malays feel besieged by the Yahudi Yeohs although the latter are of course smart enough not to mount a direct challenge to Articles 3 and 153 of the Federal Constitution.

While the YYs may choose not to openly subvert Article 3 but they will nonetheless seek to deviously undermine the status of Islam through other ways and means, such as promoting religious pluralism (and multiculturalism).

During the negotiations for Merdeka, the Chinese education movement had petitioned the Reid Commission to install Chinese, alongside bahasa Melayu, as an official language of the soon-to-be independent country. They had high ambition then and similarly have the same today.

Sidestepping a frontal assault, the YYs instead keep on insisting that Christianity must be given more room and even equal prominence in the public square. “Secular state”, “moderation” and other diversionary concepts are code words for takeover of power. 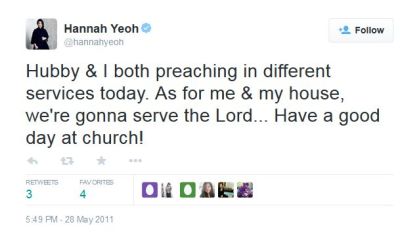 Call it ‘creeping Christianization’ if you will 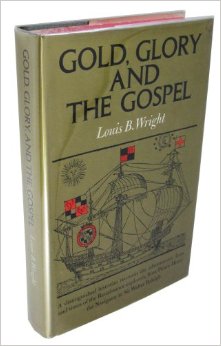 Berani buat … they dare to do anything. In the 1940s, the communist terrorists in Sungai Manik, Perak as well as Mukim VII in Batu Pahat, Johor had suggested to the Banjarese village headmen that the Muslims should change their Friday prayers to Sunday – details here.

When a Chinese recently succeeded in becoming the new Governor of Jakarta, he was a beacon of hope to the Yahudi Yeohs’ soaring aspirations here.

There’s nothing wrong in praying for Malaysia to have a Christian Prime Minister some day soon. But in the meantime before his arrival, the potential of an avid Bible-reading prime ministerial candidate keeps the furnace of hope burning.

It is both Anwar and Ah Jib who have been empowering the Yahudi Yeohs. It is for this reason that the two men are now vulnerable to the Malay backlash.

Najib may be still strong within the Umno set-up but outside the party, his grip is slipping fast.

Mother of All Munafiqs going on Malay charm offensive

57 thoughts on “Have the moves against Najib begun?”