For Syahredzan Johan’s info, one of my readers told us that he got blocked by Hannah Yeoh for asking about the 40k Bangladeshis. See

He had only been in the @hannahyeoh Twitter timeline 4-5 months tops before he got blocked. And he’s not not even an avid user of Twitter.

Syahredzan should also know that those who were blocked by Hannah were not “abusive”. Puhleez lah. Tan Sri Fong Chan Onn – a gentleman – was blocked by her.

So now other Twitter users are blocked by Hannah from even “mention”ing her is it? Just goes to show the kind of tyranny that the DAP will exercise if they ever come to federal power, heaven forbid.

Helen Ang: It depends on the individual and the context.

If we’re talking about Hannah Yeoh, then I’d agree with Mamase’s statement.

She’s the DAP SuperCyber Bully who just doesn’t have the balls and can’t handle the truth when people react to her bullying.

With the DAP evangelistas, it’s a one-way traffic. When they bully, it’s democracy and freedom of speech. When you fight back, you’re a racist, extremist, bigot, hater and tyrant.

There are DAP evangelista politicians who use their state power, party machinery and ample resources to silence critics.

Individuals who stand up to them also risk being lynched by the unhinged mob that is the DAP evangelista cult following. 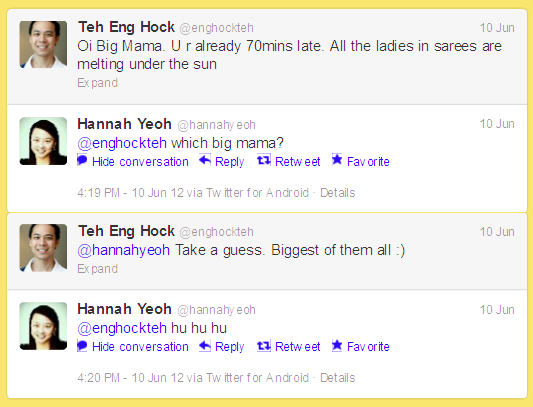 Teh Eng Hock aka Mr Regina Lee: “Take a guess. Biggest of them all”

“All the ladies in sarees are melting under the sun” – Teh Eng Hock complaining that Rosmah was more than an hour late to the assignment he was covering as a J-Star reporter (then).

“Tell lies about those who do right“

18 Let the lying lips be put to silence; which speak grievous things proudly and contemptuously against the righteous.

The above verse Psalm 31:18-20 is taken from the KJV Bible and is the King James Version old English.

Those evil people brag
and tell lies about those who do right.
They are so proud now,
but their lying lips will be silent.

New English is simpler and easier to understand  :)

The above Psalm 31:18 was highlighted by Capt Rahmat in his tweet a few days ago. 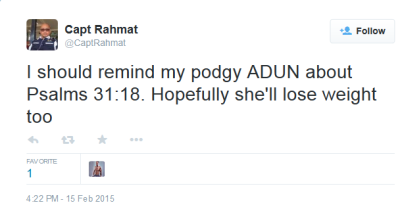 Hannah Yeoh claims that her eyes well up with tears each time she thinks of poor prisoner-of-conscience Anwar having to eat prison food.

Scores of Twitter users have complained that Hannah Yeoh blocked them from her timeline because she “cant handle the truth“. 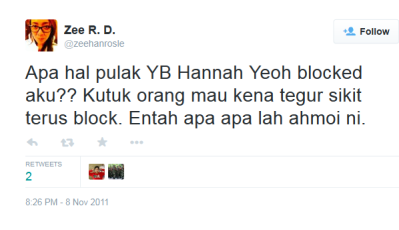 @choonhann: “now is @hannahyeoh turn to block me. Really sad about DAP. why can’t you open to criticisms?”

@tilianker: “Told u she will block you, so prima donna Hannah..”

“You block followers who question you but you preach open dialogue. Give us a break” – Rashid Nawem

@kisahntauladan: “hannah yeoh block me. DAP MP for sbg jaya, is this the leadership pakatan is offering to people”

@IzwanRosleDin: “DAP like Hannah Yeoh, Teresa Kok always block people who criticise them on Twitter. I never heard of any BN doing that.”

@nbnaturee: “ha, would like to ask @hannahyeoh but can’t do it on Tj, she block me long ago.. “

@hangtuah2020: “there needs to be a list of politicians who block people. No reason to unless bad language. @hannahyeoh is one”

@ajak_said: @hannahyeoh, why u blocked me? What I have I done to you?”

@hangtuah2020: “People like @hannahyeoh block people who ask them too many questions on Twitter too. Hypocrite jugak” 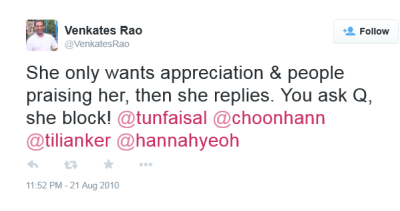 @VenkatesRao: “She won’t say, she will only block u. @hannahyeoh”

@hannahyeoh: “I’m not affected by those tweets, I know who I am & I know what I can do to serve.”

@rahimikarim: @hannahyeoh if u affected why you block my? I’m one of the voters at subang jaya. u r coward! @jezlai

@Safariladira: @hannahyeoh, Y do you block @jezlai? Said the people have democracy, if democracy is not like that… ADUN is not afraid of people’s right!”

(Note: @jezlai was the first to feel the sting of @hannahyeoh the “DAP SuperCyber Bully“)

@VenkatesRao: @jezlai when she can block, I’m sure she’s not interested to listen as well.@hannahyeoh

@ZeusIsMe: “@hannahyeoh might block you after this twit and label you as cybertrooper”