The culprits who confessed after being caught on CCTV

They have been charged with aggravated animal cruelty and will appear in court next month.

“Investigators released new details about the crime after the teen’s arrest on Wednesday. They say Hollinger threw the dog into the woods and fired at her. The dog then ran back home and sat injured on the front porch. The teens allegedly caught her and brought her back to the tracks and then tied her to the tracks where Callaway allegedly shot her several times.” (Source: WFLA)

This happened in Tampa, Florida two days ago and is all over the world news.

(1) Someone tied the pitbull mix – which is about one to two years old – to the railway tracks with a belt.

(2) The person had shot the animal thrice – twice in the neck and once above the right shoulder.

(3) Then he/she left it there bleeding and strapped tightly to the tracks, to be run over by an oncoming train.

(4) Members of the public who heard the gunshots called the police (three separate phone calls).

(5) Three cops found the dog in the nick of time as a train was approaching. They stopped the train.

(6) Two officers rescued the young dog and rushed it to a veterinary emergency centre. 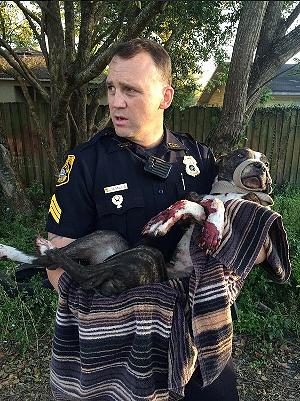 (7) Doctors operated on the dog after its condition sufficiently stabilized.

(8) Its front right leg was full of bullet fragments and broken from shoulder to elbow. At first the vets thought that the leg might need to be amputated but the surgeon judged that it could be saved by putting in pins.

(9) The Tampa police have named the female dog Cabela.

Dr. Davison @ Tampa Bay Vet emergency service said that "Cabela" aka R&R is a sweet/good tempered dog and is expected to survive #TPDrescue

10. “Really, after everything that this dog has gone through … she’s the sweetest,” Dr Jamie Davidson told CNN. “I mean she’s not angry with people. She’s not growling. She’s been really really good.”

The moral of the story

(1) Some people are capable of doing anything.

(2) We’re not obligated to be nice to everybody.

(3) There’s no need, for instance, to extend any love-love-loving thoughts to the person who tied Cabela to the tracks.

Sometimes people just deserve to get back what they dish out.

2 thoughts on “Shooters caught (Dog shot 3 times, tied to railway tracks to be run over by train)”