“1MDB’s assets are larger than its liabilities. So in very simplistic terms, if 1MDB were to be wound down tomorrow, the company would still have some assets and and money left even after paying off its debts.”

Such a clueless and callous statement from the PM!

1. You establish an RM1 million company that incurred an RM45 billion debt (RM42.3b + the recent borrowing of RM2b + used up RM600,000 “standby credit” that is actually an instant loan)

2. You buy government land on the cheap (this becomes the 1MDB acquired/gifted asset) and then you inflate the price way above market rate so that your books are ‘healthy’ to look at and will boast “assets larger than liabilities”. Dah kononnya ada aset bernilai RM51 beliyon (including gains after land revaluation).

3. But at the same time, you buy freehold land – 234 acres in Air Itam, Penang – for RM1.38 billion. This commercial purchase price is 95% higher than what some of the land was valued at just two years earlier in December 2011, according to an expose by The Edge.

NOTE: 1MDB director Ong Gim Huat is a Penangite in the construction and real estate business, and reportedly a friend of Jho Low’s father

ABOVE: Larry Low Hock Peng is Jho Low’s father who was congratulated together with 1MDB director Ong Gim Huat upon the conferment of both their Tan Sri titles – click to enlarge

Already overpaying for this very pricey land in the land-scarce Penang island, you then promise that 1MDB will build 6,666 low-cost flats (!) and 3,333 affordable homes. It doesn’t add up. Even Penang’s most famous “failed accountant” import from Malacca can tell you this, and he did – see LGE’s statement on 24 Sept 2014.

Like Tun said, the 1MDB land has either to be sold or developed first before you see any money out of it. And development projects take years to complete.

4. You make the government guarantee your RM11 billion bonds that became dubbed as “one of the largest global issues from Southeast Asia” – see ‘Najib says 1MDB’s US$3b bond has government support‘ (The Sun Daily, 18 March 2015)

5. You wanna start selling your assets under pressure and call it “restructuring”

6. You plan to make an initial public offering on your energy unit acquisition but do you really think your IPO will have many takers?

7. Are you intending to coerce the government agencies to carry your baby – the expensive, overpriced power stations?

Mind you, the points above are only scratching the surface.

In view of the facts as they are, doesn’t Najib’s statement as quoted by the EvangeliSTAR on its front page (see below) – “1MDB’s assets are larger than its liabilities … company would still have some assets and and money left even after paying off its debts” – come across as 1transformative accounting?

Another J-Star black box caption on its front page quoted Najib as saying:

“I was elected by my party and by the people of the country, to lead them. As such I’m answerable only to the people – not to any one individual.”

Ahjibgor’s statement was recapped under the sub-heading “Dr M’s criticism of his administration”.

There is one little clarification necessary on what the Umno president said. The truth is he was not “elected” per se by his party as he obtained his position uncontested.

Additionally, Tun may indeed be “one individual” only but in this particular matter, he speaks for many rakyat on BOTH sides of the political divide.

The J-Star banner headline today touts “The Prime Minister responds”. Sorry lah but the PM’s response is lame to say the least. 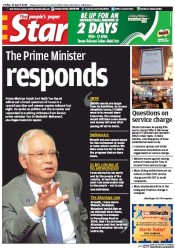 The front page is black as you can see for yourself. Black is a funereal colour for the Chinese.

The backstabbing MCA paper could have featured its Page One either in the normal colour of white or if adamant on using reverse lettering, then have the text background in the BN blue.

So why do you reckon the J-Star picked black? I wouldn’t put it past the Sneaky Star to have done this deliberately in order to hint at Ah Jib’s incipient burial.

Observe how The J-Star published an innocuous autumn festival photo – below – during the election year (2013) which had cleverly carried the DAP ‘Ubah’ branding. The party’s hornbill mascot with its Rocket logo is glimpsed on the bespectacled lantern vendor’s left – click scan of the paper’s page to enlarge