Lo Yen City restaurant (pix below) made unsavoury news headlines on Wednesday after police raided its premises following a tip-off.

“Upon arrival at the scene, police officers said they witnessed the cooks hurriedly throw a decapitated dog carcass in the kitchen waste bin,” said the Daily Mail (9 April 2015). 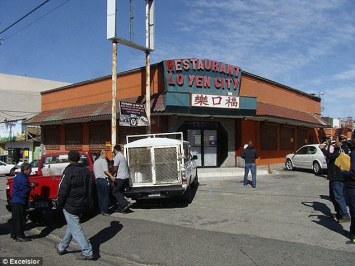 According to the Daily Mail report, a customer had heard plaintive howls coming from behind the restaurant’s back fence. Taking a peek, the diner saw two cooks killing a dog.

Mexican authorities have since closed a five more Chinese restaurants in southern Tijuana after finding caged dogs in the kitchen of one of them. Traces of blood and dog fur were also found.

Police officers rescued the dogs that were still alive.

There are an estimated 500 Chinese restaurants in Tijuana catering to the 8,000 Chinese who live there. See mexbiznews.com on 10 April 2015.

It was reported that dog meat was being passed off as pork by the restaurants to unsuspecting customers.

Unfortunately some unscrupulous Chinese tend to do these kind of things if they think they can sucker you. They pretend that something (dog meat) is something else (pork) which it is not. Or they masquerade – through their dressing and their religious invocations – to fake what they’re not. 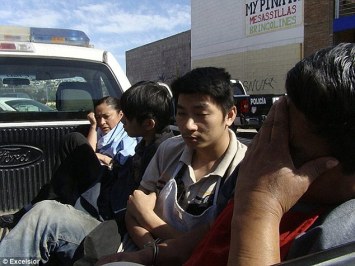 Lo Yen City restaurant owner Chou Yu Yu, who was butchering a dog in the back alley, was arrested by police along with three of his Chinese workers (pix above).

Please stop reading now if you have a weak stomach

They eat cats too

Although the expatriate Chinese in Tijuana, Mexico were under the impression that the menu was pork, back in the motherland, some Chinese have a genuine taste for dog meat.

Guangdong is one of the provinces in China where the Cantonese really eat dog, and cat as well.

BELOW: Appearance of dog after it is shaved of its fur; this one looks like it’s been scalded or boiled

Slaughtered on the spot

In some cases, the dog is skinned while still alive. It is widely reputed that the dog is beaten to death to ensure the tenderness and tastiness of its flesh. The legend is that pain releases adrenaline which makes the meat tastier.

Some Chinese also like to eat their dog roasted alive, similar to the Monkey’s Brain dish.

On the banks of Xi River in Foshan city, dog and cat meat is traded in a street market. In Foshan, Guangdong, customers will choose – from the cages lined up – which dog or cat it is they wish to eat.

The dog/cat is then drowned and butchered in front of the buyer so that he can be assured of the freshness of his purchase.

Meanwhile, the photo below went viral in social media around the world some two weeks ago. It is of a little north Vietnamese girl who tragically stumbled across her missing pet in a meat market.

The crying child is captured patting her dead dog which had got its paws chopped off and was roasted, ready for sale.

Dog meat is eaten in north Vietnam. It was the southern Chinese who introduced this ‘cuisine’ to the Vietnamese. 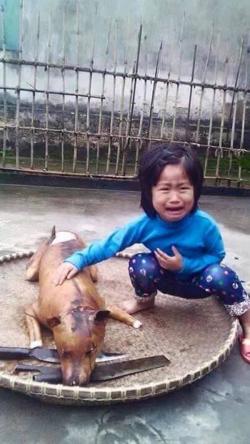