Add another two percent Christian vote swing and BN will be kicked out of Putrajaya.

This permutation – Pakatan getting +2% Malay +5% Chinese +2% Christian voters – will win Pakatan the federal government with 112 Parliament seats compared to 110 for BN – see chart below of simulation.

Umno will not self-destruct but BN will be badly hurt

The evangelistas are most happy to see Tun go for Najib’s jugular. It’s like manna from heaven.

The gleeful Dapsters are over the moon when Najib’s media consultants counterattack Tun and hitting below the belt.

With the Unstoppable Force and Immovable Object in Umno, BN doesn’t need enemies.

The foundations of the ruling party are being knocked daily as an unintended consequence of the fight between the ex-premier who was supposed to have retired a dozen years ago (2003) and the sitting prime minister who definitely won’t budge from his seat.

Najib will not let himself be ousted just like there was no compulsion for Abdullah Ahmad Badawi to step down when opposition leader Anwar Ibrahim demanded his resignation on 16 Sept 2008.

In the meantime, the DAP is reaping rewards from the BN’s self-inflicted injuries.

Read also, ‘DAP in charge of all‘

DAP growing stronger by the day

While Umno fight among themselves, the DAP evangelistas are “moving from strength to strength, faith to faith and glory to glory”.

Madame Speaker Hannah Yeoh is also personally on the “move from strength to strength”.

Winning the battle, losing the war

With Tun concentrating on the removal of Najib, and the PM concentrating on staying put in office, the focus of the DAP evangelista is on riling up the Christians in Sarawak in preparation for the state election.

Before the BN knows it, DAP would have pulled the rug out from under their feet.

Sabah and Sarawak seats that will be lost

Based on 2013 data, Pakatan will be able to seize seven Parliament seats from BN should there be a 10 percent swing among the non-Muslim bumiputera voters in Sabah and Sarawak (all other factors, i.e. Malay, Chinese, Indian support being equal).

Using an analytics software to simulate the outcome, it is calculated that seven constituencies – Kota Marudu, Beaufort, Ranau, Keningau, Pensiangan, Mas Gading and Baram – will fall to the opposition if more native Christians should desert the BN.

Umno’s ugly infighting will tilt over the fence sitters

The undi.info Parliament Voters Swing Simulator tool also calculates that a five percent shift by the Malay electorate alone ceteris paribus (with other conditions remaining the same) will give Pakatan 30 more seats.

BELOW: Infographic slide presentated by Muhyiddin at the 2014 Umno general assembly

Muhyiddin: “BN will lose with only a 2% vote swing”

Party deputy president Muhyiddin Yassin in his speech to the Umno general assembly on 25 Nov 2014 said:

Muhyiddin also said that based on GE13 stats, 44 BN Parliament seats are “grey” – see chart above – where the ruling party won with small majorities of between 0.1 and 5.9 percent.

He warned that with a drop of two percent popular support, the BN haul of Parliament seats will be reduced to 103. A simple majority in Parliament requires a minimum of 112 seats. “BN will lose,” he declared. 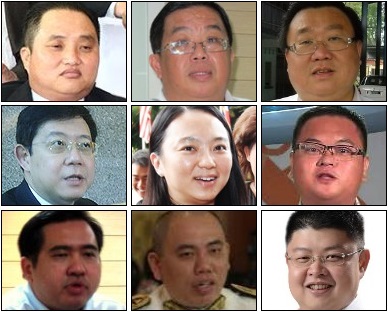 What the DAP will do to you

The Selangor Speaker submits an amendment (new inclusion) to the House rules to make it compulsory for the opposition leader to also chair the Public Accounts Committee.

The House which Pakatan controls with a 4/5 majority passes the proposed amendment. So now the BN Adun who is opposition leader will be forced to become the PAC chairman.

Since the BN Aduns don’t want to be steamrolled into rubber stamping the PAC, they refuse to pick an opposition leader from among the BN (well, actually Umno only) ranks.

BELOW: Hannah Yeoh’s tweet a couple of days ago (Apr 15)

As a result of the BN stonewalling, Madame Speaker is unable to compel YB Sungai Burong or any of his Adun colleagues to hold the post of PAC chairman despite the Selangor DUN already having approved the new regulation.

And what does the DAP do after it has been checkmated? Pakatan appoints DAP Adun YB Sekinchan as acting PAC chairman. Eh, but what happened to that new rule which Pakatan recently created mandating that the opposition leader must also chair the PAC? Ketara sekali diorang buat ikut suka hati jer.

This episode goes to show that it is not the process of law which DAP-Pakatan cares about but the power they have at present to do things their way by bulldozing through whatever they like. (Bahasa Melayu version @ ‘DAP berkuasa, sekarang sudah buat ikut suka hati di Selangor‘)

Neither Tun Mahathir nor Datuk Seri Najib cares about rescuing us Selangorians from the oppressive clutches of the DAP evangelistas. This dynamic duo battling each other unto death will also inadvertently cause some of the rest of the states to fall to Pakatan in GE14.