“[T]he totally different reactions between the plight of the Muslim Rohingyas and the mostly Muslim Palestinians or Syrians” was brought up by regular commenter AC-DC @ 2015/05/20 at 12:02 pm.

Rohingya have become a boat people like Vietnamese before them.

Vietnamese boat people were mostly ethnic Chinese. Vietnam was not their motherland. They were pendatang who steadily mass migrated there starting the 18th century although there had been pockets of settled Chinese communities earlier in Vietnam.

When the French colonized Vietnam, economic opportunities opened up for the immigrant races. This is a trend similar to the Chinese population explosion in Malaya when the British made themselves the imperial rulers here.

Similarly as with the Vietnam timeline, there were also pockets of settled Chinese communities earlier in Malaya before the immigrant population boom, i.e. the Baba and Nyonya in Malacca and the Cina Peranakan in Penang, Kelantan and Terengganu. However the bulk of the Chinese immigrants in Perak, Selangor and the rest of the west coast of the peninsula were relative newcomers.

The table below shows the sharp increase in Chinese immigrant population when Vietnam came under French colonial rule.

In the matter of five short decades from the turn of the 20th century to the early 1950s, the Chinese immigrant population in Vietnam quintupled (x5).

Birds of passage flying away

The Chinese who were third and fourth generation immigrants in Vietnam soon chose to relocate once again and beginning the mid-1970s, boarded the boats as economic migrants. The Vietnamese boat people eventually got themselves resettled in the white countries like Australia, USA and Canada.

They were transients who did not live and die in Vietnam, or die for their country.

Vietnamese boat people who were ethnic Chinese deserted Vietnam but then again, that country was not their motherland.

And today we have Rohingya who are third and fourth generation emigrants from Rakhine becoming boat people. Burma is not their motherland.

As explained a little earlier, the Rohingya were from the region today known as Bangladesh. They are not native Burmese.

The Rohingya migrated to Rakhine state (also called Arakan) in droves for jobs when the British began colonizing Burma after winning the First Anglo-Burmese War. This movement of people was easy because at that time the Indian subcontinent was under the rule of the British Raj and the Rohingya’s place of origin Chittagong borders Arakan.

Following Britain’s complete victory in the Third Anglo-Burmese War, Burma was absorbed as a province of British India. Thus the mass migration of Muslim Bengalis to Buddhist Burma was unimpeded due to national boundaries being erased.

In the northern part of Rakhine, the Rohingya are the majority population at 91 percent. Nonetheless just like the Vietnamese boat people, the Rohingya boat people too want to leave the country they had been residing in over the last several generations.

The DAP and their church people might want to help the 50,000 Rohingya currently in Malaysian camps to transit to a better preferred destination – like say, Tasmania. Let’s see some proactive effort by the Dapster evangelistas in this direction, can we?

The BN government is now being accused by the Christians as “inhumane” for turning back the Rohingya boats.

Malays are being accused by the Malaysian Firsters as “racist” because Malays allegedly favour the pretty Palestinians over the “swarthy” Rohingya.

The Firsters are saying that if it were the Palestinians to come a-knocking on our door, they would be embraced with open arms. Or that if the Rohingya looked more like fair-skinned Palestinians or Bosnians, their reception would be a lot warmer.

Well, it is undeniable that Palestinians are good-looking. Below is Queen Rania of Jordan. She’s of Palestinian descent.

Proof that Malaysian Firsters are full of love

They keep shouting that they’re full of loving kindness and are prepared to contribute Maggi Mee and mineral water for the Rohingya’s “humanitarian relief” to prove it.

According to the opposition followers, those Malaysians who support the government’s pushback of the Rohingya are full of cruelty and hate.

BELOW: Hannah Yeoh has always thought that Umno-BN are wicked

Going back in history (and 1957 is not that long ago), if Umno had not persuaded the Raja-Raja Melayu to agree to giving Chinese a Malayan citizenship, their descendents would today be stateless like the Rohingya and like a sizeable number of Chinese in Brunei who are not granted that country’s passport.

The Chinese, complaining that they’re “second-class citizens” in Malaysia, also claim that because of state persecution, around one million mostly Chinese and Indians have left Malaysia in a Brain Drain exodus.

So we see the phenomenon of Vietnamese and Rohingya boat people and Malaysian Chinese “plane jumpers” (i.e. flying to the Western countries and then disappearing into the underground).

And there is a Palestinian diaspora as well. They live in Jordan, Lebanon and other host countries. The ones living in Gaza and the West Bank refuse to budge despite the Israeli bombs dropped on them.

The difference between Rohingya and Palestinians is that Palestinians are native and the ones who are displaced still want to go back to their land of olive groves. (Israel cannot and will not allow “the right of return” to the refugees – a position which is wholly understandable from the Israeli point of view.)

Do the ethnic Chinese Vietnamese boat people who have resettled in the West still wish to return to Vietnam if given the choice?

Why don’t the hateful Malays wanna be Firsters too?

I do not believe if the Rohingya were to sail to Japan or Korea that either countries would take them in, not even one boatload of 500.

And furthermore, the Japanese and Koreans would surely not be calling their governments “inhumane” and “merciless”. 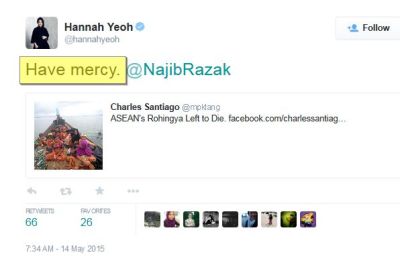 Malaysian-ness of the Malays is questioned

The Japanese and Koreans are homogenous societies. Malaysians are a plural society.

Monocultural and monolingual societies are more cohesive. Or another way (one aspect) of looking at it, we can say that people in the homogenous countries tend to think more alike as a collective. In multiracial Malaysia, public opinion on the Rohingya is split.

If Malays had followed the example of Burma and refused to grant citizenship to the immigrants, then Tanah Melayu would today be largely monoracial. The British converted the Malay peninsula into a polyglot society.

Now the Malaysian Firsters are insisting that Malaysia is an “immigrant country” (examples Australia, USA) and hence, there is no reason to shut our door on the Rohingya. It is only the “hate-spewing, divisive, race-obsessed ignoramuses” who can be so heartless as to turn their back on the boat arrivals comprising “pregnant women, children, the elderly and the sick”.

Nevertheless, it is suspect whether the Firsters would welcome the Rohingya into their own gated communities in the affluent suburbs.

The  Firsters want the nama harum of being seen as merciful and compassionate in the social media but it is still left to the “backward-thinking”, “pathetic” people to carry the can (take responsibility) for the Rohingya.

If the Malays had acted like the Burmese at the time of both countries’ independence and denied citizenship to the immigrant races , then the Malays would not today have to put up with the constant screams that they’re “Racist!”

Mind you, some of the foremost Firsters can’t even make the cut elsewhere, such as Hannah Yeoh whose application for Permanent Residence (PR) in Tasmania, Australia was binned.

The self-professed colour blind Firsters proclaim they’re not racist. It must be the rest of us who are xenophobes for our inability to love the Rohingya as much as the churches do.

'Inhumane to push boat people away' – FREE It adds to the trauma of their life-threatening situation. http://t.co/t62l09fvvx

The Council of Churches Malaysia has rebuked the Malaysian government for being “inhumane“.

What does it mean when our authorities are characterized as not possessing any humanity?

The animal abuse below happened a few days ago in Kuala Lumpur. Someone cut off the puppy’s limbs and tail, and left it to die.

After six hours of bleeding and suffering, the puppy breathed its tortured last.

Why don’t churches teach Malaysians to be better people?

The churches are suddenly like Nobel Prize freedom fighters overnight for the Rohingya cause.

Are our Malaysian leaders perpetrating calculated cruelty as alleged by the evangelistas?

Should there be an unfortunate single fatality in the Rohingya boats, we might well expect the evangelistas to beat their tin drums telling the world how beastly the Malaysian leadership is. Mark my words.

21 thoughts on ““Racism”: Palestinians and Rohingya – one difference”