Penang deputy chief minister (II) P. Ramasamy said in his press statement today, “The police arrests of some individuals for escalating the brawl at Low Yat Plaza clearly indicate they have close nexus with Umno.”

Meanwhile, Grandpapa Dapster Lim Kit Siang has drawn parallels between the Low Yat and May 13 incidents.

In call for RCI, Kit Siang draws parallels between Low Yat and May 13 incidents (MMO) http://t.co/bDZJ1RimkS

YB Wong, who is also the policy director for DAP Johor, said in her July 13 press statement that “Umno stoking racism in Low Yat to divert attention”.

She alleged that “the ruling regime has found it fit to constantly agitate racial tension for its own political survival”.

Aside from accusing Umno of blatant racism, Wong added:

“As a ‘Anak Bangsa Malaysia’, I believe all Malaysians are standing together to say NO to racism. It is incumbent on the regime to ensure that the Low Yat incident does not escalate further.”

The DAP evangelistas are positioning themselves as #SayNoToRacism – see Hannah Yeoh’s tweet below.

BELOW: DAP MP for Serdang evangelista Ong Kian Ming dusts off the same green baju Melayu he had worn previously for this year’s photo op while DAP Kinrara Adun Ng Sze Han occupies masjid following in the footsteps of his female party colleagues 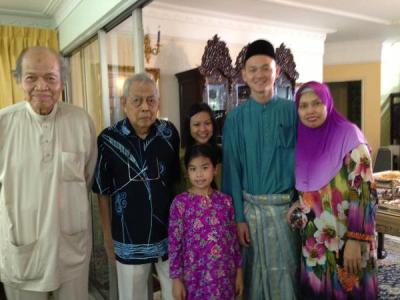