There was generally no social interaction between the races in Malaya.

By the 1920s, the Malays were starting to feel uncomfortable with the huge presence of alien workers. This discomfort was expressed through the Malay publications and writings of the time.

In response to the Malay unease, the British colonial government began taking steps to curtail the inflow of Chinese emigrants by enacting the Immigration Restriction Ordinance in 1928.

Malays and Chinese in Malaya had no shared living space. Both resided in different neighbourhoods.

Not only did they lead separate lives but the Malays were feeling increasingly threatened by the large numbers of Chinese swamping them. At the turn of the third decade, the ratio of Chinese to Malay was four Chinese for every 4-and-½ Malays.

In 1933, the earlier 1928 immigration ordinance was replaced with a new legislation called Aliens Ordinance which came into force in January 1933.

The Indians in Malaya were not regarded as aliens because they were British subjects since India was at that time under colonial rule. Malays were recognized by the British as the indigenous people.

It was the Chinese who were categorized as “aliens” and viewed by the British as “temporary migrants”.

On their part, the diaspora primarily saw themselves as “overseas Chinese” and their feelings of nationalism were still orientated to China. When the Sino-Japanese war broke out in 1937, Chinese in Malaya supported China’s war effort against the Japanese invaders of their motherland. 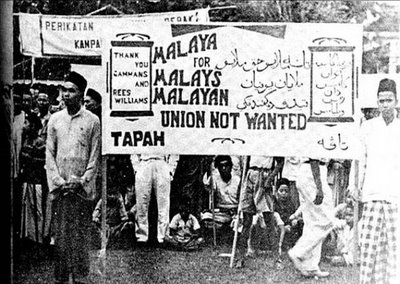 The mass immigration over the previous decades had created, in the west coast of the peninsula, many Chinese-dominated towns surrounded by poor Malay rural areas. The two races did not inter-mix nor intermarry.

During the power vacuum at the end of World War Two, i.e. after the surrender of the Japanese occupation forces and before the return of the British troops, there was a brief period of anarchy and bloodletting.

Called the ‘Interregnum’, all hell broke loose from 14 Aug to 3 Sept 1945. The communists guerrillas emerged from the jungle, seized the towns and kampungs and proceeded to torture and slaughter the Malays and those Chinese whom they termed “running dogs”.

The Malays reacted with amok and their massacre of the Chinese in 1945 was on a scale much more terrifying than May 13.

It was also because of the lingering bad blood of the Interregnum that the Malays objected so vehemently in the following year, 1946, to the Malayan Union which granted citizenship to (would be) Chinese applicants on loose terms.

The massive protests against the Malayan Union should also be read as a strong rejection by Malays of the Chinese in their midst.

Sino-Malay relations were hostile. The Emergency was in effect throughout the 1950s due to the communist insurgency.

Chinese communists took up arms against not only the British government but also against the Malay rulers and wanted to take over the country. If the communists had succeeded, then Malaya would have become a republic like China and the monarchy abolished.

Communists were identified with Chinese in the Malay mind.

The anti-communist Briggs Plan introduced the forced resettlement of Chinese sympathizers into fenced and guarded New Villages. This move sought to isolate them from the terrorists and deter logistical help from reaching the cadres who were waging a civil war.

In the main, Chinese and Malays had very little, if at all any, social interaction with each other during the 1950s. 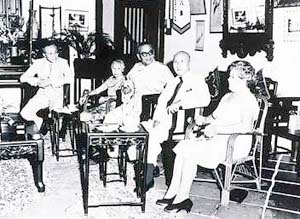 The elites of Umno and MCA worked together to achieve Independence – that’s true. But you mustn’t forget that MCA founder and president Tan Cheng Lock was a Malacca Baba (above).

He was unlike the majority of his fellow Chinese and in any case, the Babas and Nyonyas are today on the verge of extinction, if not already.

You could say that Tunku Abdul Rahman was ‘conned’ if he had optimistically believed that the majority of the two million Chinese given Merdeka citizenship (1952-1960) en masse could be assimilated into Malay culture like his Baba buddy Cheng Lock and the other top MCA leadership who were Straits Chinese.

Malaysia continued to be an ethnically polarized country in the 1960s. The race and religion fault lines remained the same.

There were Sino-Malay clashes in Bukit Mertajam, Penang in July 1964. Also in July and additionally in September the same year, race riots broke out twice in Singapore, which was then a part of the Federation of Malaysia.

Chinese and Malays fought each other in Kuala Lumpur too in early 1965 as well as in Penang in November 1967. The Penang riots were also known as the Hartal riots. 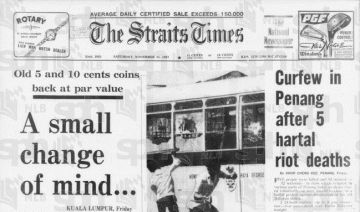 A month before the watershed date of 13 May 1969, there was a Chinese-Malay prelude clash in Penang in April 1969. Obviously the Malay polity was unhappy and angry, and their anger reached its peak in May 1969 in Kuala Lumpur.

With all that rioting, who actually believes that race relations were ever warm and fuzzy?

According to the White Paper on May 13,

“Sino-Malay distrust runs like a thread through the nation’s recent history. Racial incidents of various types have been catalogued. The pattern that emerges indicates that the major incidents normally took place in Chinese-dominated areas with strong secret society organizations and most of these incidents inevitably began with a secret society/Malay hoodlums clash.”

The mistrust between Malays and Chinese mentioned in the National Operations Council official report on May 13 has never been dispelled.

The NEP went into full swing. It provided Lim Kit Siang with more ammo to tell the Chinese that they’re second-class citizens.

Chinese with professional qualifications and capital did their hop, skip and jump to the next country like the birds of passage that they are.

Preachers and church workers were detained in Kamunting.

The J-Star, covert voice of the subversive opposition, was suspended by the Home Ministry.

Some 95 percent of Chinese children are enrolled in vernacular school SRJK(C). The race divide has widened even further.

Tsunami and the ABU-ABU-ABU beat goes on. Are there any signs that the rift between Chinese and Malays can be mended?

So pray tell, when was it in our country’s history that race relations between the Chinese and the Malays were akin to a Yasmin Ahmad feel-good Petronas ad?

Are the evangelistas willing to make peace with Islam?

50 thoughts on “Were we ever united as a country, truthfully?”