The feature by Ian McIntyre is headlined ‘End race politics, says Mujahid‘. It quotes Mujahid as promising that Gerakan Harapan Baru will not politicize race and religion.

(By the way, the New Hope party sure does sound like a church.)

Cozying up to the church

Mujahid, who is in the New Hope protem committee, said in his interview with The Heat that the new party has to include members who are of different races and faiths in order to be able “to lead the country forward”.

Now that’s a remarkable contortion. New Hope is purportedly set to be an Islamist party of sorts but here according to Mujahid, it wants to include Christian members as well as adherents of other faiths.

Well, this interfaith direction plotted by New Hope under Mujahid as one of its leading lights is hardly surprising. After all, the MP for Parit Buntar – Mujahid’s seat has more than a quarter (27%) Chinese voters – is credited with coining the slogan ‘PAS for All’ as well as creating the PAS Supporters’ Congress for non-Muslims.

In his article on Mujahid, The Heat’s Ian McIntyre wrote:

“History is now repeating itself in PAS as the party used to be helmed by technocrats – its ex-president Tan Sri Mohamed Asri Muda was one, but he was booted out by the ulama. Ironically, it was the late spiritual leader Datuk Nik Abdul Aziz Nik Mat, then a young cleric, who led the charge in the 1980s to remove Asri from the party.

“Asri passed away in 1992 after having led PAS briefly into Barisan Nasional before the party quit the federal coalition in 1978. Nik Abdul Aziz went on to become a revered leader and today, his son Nik Abduh played a role in the purging of the non-ulama leaders from the party last month.“

To summarize, this is what The Heat’s Christian reporter is saying:

How sneaky! of The Heat to finger point Nik Aziz and then segue into a landing a blow on Nik Abduh – the Christians’ favourite whipping boy.

It was Mujahid’s own father Yusof Rawa who took over the post of party president from Dr Asri, and not Nik Aziz. See the list of PAS presidents below.

The Christians’ favourite past time is picking on Nik Abduh 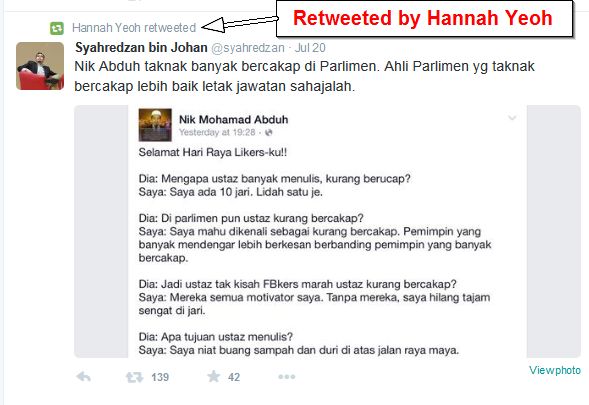 Mujahid, by his own admission, has the reputation of being “a pro-Christian liberal”. Therefore it’s not surprising that The Heat should want to bury Mujahid’s family connection with the purge of Dr Asri Muda.

The Heat blames Nik Aziz for Asri’s ouster and at the same time sneaks in a punch at Nik Abduh whereas the truth of the matter is that Asri was replaced as PAS president by Yusof Rawa – Mujahid’s father.

By the way, Asri was BN-friendly. He was awarded a Tan Sri title.

The era of “kepimpinan ulama” in PAS is accepted to have begun from Tuan Guru Yusof Rawa. And here is The Heat brazenly spinning. Woaaah, the cheek of these Christians who control the media.

Below is yet another shameless piece of spin by The Heat.

Why we’re living in dangerous times

Because the non-Malays are ignorant and permit themselves to be deliberately misinformed by the media sources that they frequent.

This ignorance is coupled with the immeasurable sneakiness of the evangelistas and the DAP political operatives to create a breed of bodoh sombong.

See how the sneaky bastards operate

“Someone reported my post of the rat picture as violating Facebook’s Community Standards on ‘graphic violence’.

“Fortunately, FaceBook not stupid and knows it is a dead rat and decided it was not ‘graphic violence’.

“That’s all you people do when butthurt.

Led by the DAP Super Cyberbullies, the Dapsters become vigilante squads who perpetually foam at the mouth and “spew” hate.

Drunk on J-Juice, their herd mentality is harnessed to become a lynch mob. We saw how Hannah Yeoh sicced her rabid Jerusubang fanboys on the Sin Chew columnist who had questioned her tudung-wearing.

They just swallow wholesale the poison they’re fed and then spit venom. That’s how we saw a Lim-Family-Mafia blogger hate on Isma by relying solely on a Malay Mail-spun piece ‘Do wear veils, don’t wear T-shirts‘ when the actual Isma advisory was reasonable by conservative Islamic standards.

How The Malay Mail spun it

The Golden Rule: What goes around comes around

The Malay Mail is full of Christian staff who migrated from The Malaysian Inciter. They’ve brought the TMI fitnah modus operandi along with them.

Political commentators are unanimous in pronouncing that racial and religious tensions are at dangerous levels. We’ve already seen the outbreak of violence at Low Yat.

The most important element that cannot be ignored is how vicious bullying by the opposition, particularly its evangelical Christian faction, is eliciting the violent response.

All this malicious spinning and hate-mongering that is being carried out by the evangelistas is what’s prompting the reactions.

14 thoughts on “See how the sneaky Christian twisted PAS history”