Justice Apandi had previously sat with Justices Abdul Aziz Abdul Rahim and Mohd Zawawi Salleh in the Court of Appeal to hear the Church’s application for a judicial review on the ‘Allah’ case.

The coram, in their judgment delivered on 14 Oct 2013, found for the government and upheld the need of the authorities to preserve public order.

“On Article 11(4), Professor Dr. Shad Saleem Faruqi in his book entitled ‘Document of Destiny the Constitution of the Federation of Malaysia’, published in 2008, at pages 138-139, wrote:-

“Propagation of religion to Muslims: Under Article 11(4) of the Federal Constitution, non-Muslim may be forbidden by State law from preaching their religion to Muslim.  Many Muslims complain that this part of the ‘social contract’ is not being observed by some evangelical groups, some of whom are from abroad.   On many occasions in recent years news has spread like wild fire that thousands of Muslims have converted or are waiting to convert to Christianity.  Invariably this raises tensions.”

Aunty Hannah predictably sniped … and what else is new

And below is Madame Know-It-All’s self-righteous squawking at the Court of Appeal decision.

Apandi, who is replacing Abdul Ghani Patail as AG, is a former Kelantan Umno treasurer.

@hannahyeoh tweeted in response, “… after this Court of Appeal decision? Still believe in working with Najib for transformation?” and picking on the staunchly Christian cabinet ministers Paul Low and Idris Jala.

Responding to Hannah in her timeline, Twitter account @GEanalyst said that Paul and Idris “have become paraya class” – see screen cap of their tweets below.

Hannah and her Jerusubang crowd are very free and easy in labeling others as “low class” and pariah.

Evangelistas think themselves more just than the justices

Below is another response by the DAP evangelista Yang Berhormat to the Court of Appeal decision.

Serdang MP Ong Kian Ming slammed as flawed the judgment which had determined that the usage of the name ‘Allah’ is not an integral part of the faith and practice of Christianity.

According to YB Ong (pix right), its finding was based on “such weak legal grounds” and the judges had showed “a complete lack of understanding”.

Homing in on Apandi who authored the summary judgement, the DAP evangelista berated the judge for imputing that

“the usage of the word ‘Allah’ by the Catholic Herald is a potential threat to the peace and harmony which exists in Malaysia even though such a threat has never materialized in Sabah and Sarawak where Bumiputera Christians have been using the word Allah for generations!”

In Ong’s view, Apandi had rendered “a great disservice to the Bumiputera Christian community in Malaysia and the harmonious relations enjoyed by Christians and Muslims in East Malaysia”. 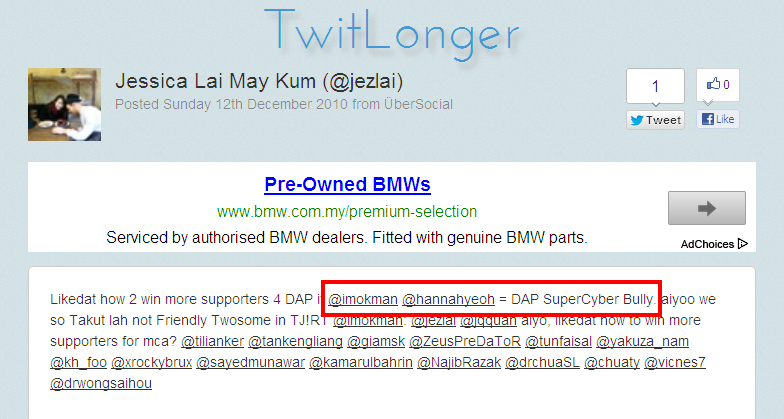 Ong Kian Ming and Hannah Yeoh both have a notorious reputation as “DAP SuperCyber Bully”, so their rants against the bench were only to be expected.

Joining the Bash-the-Judiciary bandwagon subsequently was newcomer Yeo Bee Yin (pix right). She is the DAP evangelista Adun for Damansara Utama, where the infamous DUMC church is located.

YB Yeo had fulminated at the 23 June 2014 subsequent Federal Court decision to reject a challenge to the ban on Christians using the word ‘Allah’ in the church publication, The Herald.

In the 4-3 decision, the four judges who decided against the church were:

The three judges who decided in favour of the church were:

Yeo Bee Yin: “Catch me if you like, charge me if you can”

Aside from telling Perkasa and other Muslim NGOs that they had won their “holy war” and should therefore “go celebrate”, Yeo Bee Yin also congratulated those others of “Allah’s soldiers” whom she believed must be having a “happy time” after winning “a war for Allah”.

She congratulated too the four judges who dismissed the Church’s application for leave to appeal, saying to them, “if you made this judgement to protect your own religion, congratulations for sacrificing your professionalism”.

The DAP evangelistas have been very uppity with the judiciary. In her statement slagging Perkasa, the Federal Court judges, the Home Ministry as well as Umno – see screencap below – YB Yeo issued a dare to the authorities – “catch me if you like, charge me if you can”.

Well, let’s see what happens now that Ghani is no longer the AG and there is a new man at the helm. And one who is cognizant of how the evangelistas operate.

92 thoughts on “New AG aware of the evangelical groups’ doings”