The DAP wants to browbeat you into declaring “Malaysian First”. If you decline, Aunty Hannah will blow her puffy cheeks and screech “racist! racist! racist!” at you. 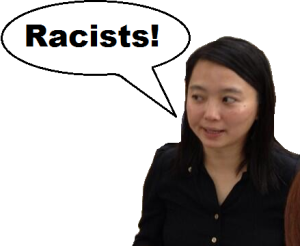 BELOW: Mama Dapster wants to decimate the Chinese community in Malaysia to “zero”

Grandpapa Dapster Lim Kit Siang tries hard to portray himself as a Patriot First who’s spilling over with nationalism.

Well first off, what are the different nuances behind the concept of ‘national’ and concept of ‘citizen’?

The ‘Difference Between’ website explains that although the two terms are sometimes used interchangeably or as synonyms, nonetheless, they do differ in some aspects.

(a) You’re a Malaysian national because you were born in Malaysia.

(b) You inherited your Malaysian nationality from your parents.

(c) It’s a ‘natural phenomenon’ (no point overthinking about this).

(d) You belong to a group speaking the same language, having the same culture and traditions, shared history and other general similarities.

(e) You don’t change your nationality.

(i) Alberto Fujimori, the former president of Peru, has Japanese nationality.

(ii) Miss Japan Ariana Miyamoto looks black. She’s actually biracial and is a Japanese national – born in Japan, speaks Japanese as her native tongue, was raised a Japanese and inherited her nationality from her Japanese mother.

(b) You’re a Malaysian citizen because you’ve been accepted into the country’s political framework through legal terms.

(c) Unlike nationality, citizenship may not always refer to people of the same group. Hence we may all be Malaysian citizens but still practise our differing cultures.

(d) You can apply to change your citizenship anytime.

For example, there was that Malaysian munafiq living temporarily in Tasmania who had applied for Australian permanent residence but alas, she failed in her PR application. How many of you suspect that she would have gladly UBAH-ed her citizenship if given half the chance?

BELOW: Hypocrite Hannah – the reject item

Christians were not regarded as Chinese nationals in British Malaya

The Federated Malay States made a law called the Secretary for Chinese Affairs Enactment of 1899 – see below- that qualified who should be treated as possessing Chinese nationality.

The definition of ‘Chinese national’ was drawn up for administrative purposes vis-a-vis Chinese immigrants in Malaya, then under British colonial rule.

The 1899 Enactment deemed a Chinese national as someone who has a Chinese surname, speaks the Chinese language, follows Chinese customs, habitually wears Chinese dress, is domiciled in China and owes his allegiance to the Emperor of China (Note: In 1899, China had not yet become a republic).

The Enactment further specified that “Christian Chinese shall not be deemed to be of Chinese nationality” – see below.

In other words, Chinese in that period more than a century ago did not accept those who converted to Christianity as being any longer a true blue Chinese.

In the last 1-and-½ years, authorities in China’s Zhejiang province alone stripped 1,200 crosses from church buildings. Hundreds of churches have been demolished. There were similar crackdowns in a few other eastern China provinces having a discernible Christian minority.

Zhejiang also proposed a ban on any further placement of crosses on church rooftops – see 7 May 2015 Associated Press news report.

What we can gather from the skittish reactions of mainline Chinese in China is that the Christians are creeping them out.

The lesson for us to learn here is that the DAP evangelista politicians are far, far from being representative of the Chinese race. Please don’t look at the behaviour of DAP evangelista Yang Berhormats and their Firster herd, and think this is what Chinese people must be like.

In reality, Malaysian Chinese are but a fraction of the diaspora while the diaspora are only a minuscule percentage of the more than 1.2 billion Han ethnics in mainland China.

DAP in general, and the evangelical party’s screechy banshees (Christian politicians) in particular are not any measure of Chineseness.

‘Chinese’ is not a dirty word …

… although the DAP evangelistas are attempting to make it so through their insistence on “zero Chinese”.

The Han Chinese are 91.6 percent of the population in China. That’s roughly 1.24 billion people.

In school, I was taught by my teacher that we – the Chinese kids – were hua ren, a word used commonly to mean ‘overseas Chinese’. The Chinese diaspora is estimated to number a further 50 million.

At home, my parents transmitted the understanding that I am tang ren or pronounced teng lang in Hokkien. Tang refers to China’s Tang dynasty. So we’re (descendents of) the ‘people of the Tang dynasty’ – the literal meaning of the term.

It does not make sense either to negatively stereotype this largest racial group on planet Earth with epithets like “Cina penipu”. There are too many Chinese in the world for anyone to generalize so broadly.

With each passing day, I’m beginning to comprehend more and more why older generation Malays so despise Lim Kit Siang and why so many Malay reporters and writers/bloggers dislike Lim Guan Eng most intensely.

Guan Eng’s “brothers and sisters”, “we’re all one big raceless family” Firster speeches are nauseating. Kit Siang’s false dichotomy – “Are you Malaysian First or Malay First?” – and his single-mindedness to pigeonhole us all is the act of an unhinged, past his sell-by date politician.

It’s too sad that the Lims and their Christian proteges are causing this current backlash against the Chinese community.

We’re not confronted with only two limited choices

Yesterday I posted ‘My ten “either or” choices‘. It was framed within my personal sphere of preferences.

I’m certainly not forcing anyone else to pick the either (a) or (b) options that I set out although you’re welcome to play along for fun.

I also asked, “Mando-pop songs or Malay rock songs?” to which orangkampung responded, “Neither” while LY opted for “Korean ballads”.

I asked, “Hudud or status quo?” Nizam replied, “Not too worried about Hudud” while jentayu said, “Lagi mau mimpi hudud. Sheeshh…” scoffing at PAS’s ability to be able to implement it.

When I provide only two choices – “Cat or dog” – you’re quite free to say “Not keen on pets” (like the reply LY gave).

I wondered, “Chinese boyfren or Malay boyfren?” and reader Urb riposted, “I’m a male, I can’t choose a bf!” (The question applicable to him is ‘gf’.)

But how about when Madame Speaker spitefully asked, Joceline or Helen – “who is more absurd?” See her tweet above.

Likewise when Kit Siang bullies everyone with his soalan maut: “Are you Malaysian First or Malay First?”, we should likewise tell him to go fly kite.