Prior to Zaid’s buyout, Kita was known as Angkatan Keadilan Insan Malaysia (Akim).

Akim→Kita→New Hope is a political vehicle that’s akin to a none too spiffy used car. It changes hands when expedient and gets itself registered under new owners.

As a comparison, the Kita tagline is “Moderate. Democratic. Liberal.”

Akim’s origin as a parti pondok

Ironically, Akim had been established in 1995 as a splinter from PAS. So the New Hopers are, through two degrees of separation, still connected tangentially to their PAS roots.

Choosing to ride on the Kelantan-made Kita/Akim is not really an auspicious start for the wannabe New Hope. The party’s track record in the general elections is abysmal, to say the least.

From 2002 to 2009, Akim was headed by Hanafi Mamat (pix right). Hanafi, the Akim president, was headmaster of Sekolah Pondok Padang Siam in Tanah Merah, Kelantan.

In 2008, Hanafi contested the Permatang Pauh by-election. He lost his deposit after only managing to secure 92 votes from a voter turnout of 47,410. 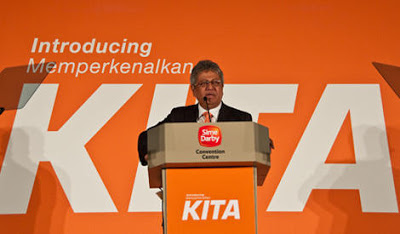 Performance of Kita in 2013 general election

Kita contested two Parliament seats and 11 state seats, and lost its deposit in all of them.

For Parliament, Suhaimi Hashim obtained a mere 200 votes in Sungai Petani, Kedah while his party colleague Sylvester Dawat did slightly better with 423 votes in Tenom, Sabah.

For DUN, Kita stood in five seats in Kedah, three in Selangor and one each in Penang, Malacca and Sabah.

The best performance by Kita’s GE13 candidates was recorded in Pitas, Sabah where Awang Latip Abdul Salam got close to one percent (0.93%) of the total votes and Sungai Pelek, Selangor where Zakaria Mohd Mukhtar got near to two percent (1.81%).

In boxing, the lightest weight class is the Mini Flyweight. In terms of political heft, Kita can be said to be Micro Fleaweight.

Out of Umno frying pan into the PKR fire

When PM Abdullah Ahmad Badawi selected him for Cabinet, Zaid was appointed a Senator.

His tenure as Minister in the Prime Minister’s Department lasted all of 183 days or roughly six months – the shortest ministerial portfolio in Malaysian history. Zaid tendered his resignation as de facto Law Minister on 15 Sept 2008.

Barely three months later on 2 Dec 2008, Zaid was sacked by Umno. He proceeded to join PKR on 13 June 2009. Then on 15 Nov 2010, he announced his decision to quit the party and PKR accepted his resignation with immediate effect.

Zaid’s stint in PKR lasted a mere one year and three months.

“I am quitting because I want to dissociate myself from liars and cheats. I do not want to be part of a group that propagates lies and does not have any qualms about cheating for as long as the end justifies the means,’’ he told The Star.

Zaid became the Pakatoon’s favourite whipping boy for calling the PKR leaders “liars and cheats”. He had to endure the nastiest names and most degrading insults hurled at him.

Reporting for Malaysiakini, Regina Lee wrote that “Zaid Ibrahim’s Parti Kita was launched in a razzle-dazzle ceremony this morning (19 Jan 2011)”.

Regina also described the Kita launch as “an all-star event” where before Zaid delivered his keynote address, a countdown appeared on a huge screen, to accompaniment by the Rolling Stones hit (I Can’t Get No) Satisfaction. How prescient the song title.

On 5 Nov 2012, Zaid quit under duress as Kita president, his own party that he founded.

President who got locked out of his party website

The Kita internal dispute was very messy … similar to the present leadership tussles in MIC and Dong Zong where a challenger disputed the incumbent’s claim to be party president – see, ‘Zamil declares himself as the new Kita president‘ (FMT, 29 Feb 2012)

There was also an acrimonious falling-out between Kita’s founding members. Party secretary Abdul Latif Thambi had refused to disclose to Zaid the password to the Kita website. Zaid sacked him.

All told, Zaid’s presidency in Kita did not touch two years. 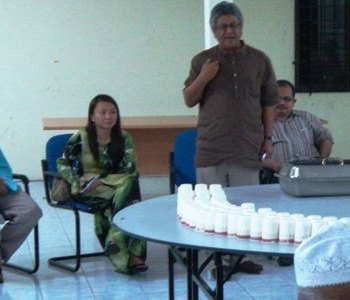 Zaid’s track record indicates that he couldn’t last the course in his various political endeavours.

Yet today, lo and behold, the Jerusubang Chinese and the Christians in the peninsula are casting the man as their political messiah. They’re clutching at straws, really.

Zaid couldn’t even get a grip on a small party like Kita – which he himself founded, mind you – having only a few thousand members. It’s safe to say that Umno, the lumbering behemoth claiming a membership of three million or thereabouts, is out of his administrative league.

Say what you will but Najib is in control of Umno and he managed to pull off Muhyiddin’s sacking.

Umno and its complex workings are realpolitik. But realpolitik is something the evangelista-Dapsters do not have a grasp of.

.
Chinese have lost all self-restraint in their present-day attacks

The Chinese have made enemies of both Umno and PAS grassroots. That’s a whole lot of Malays to have pissed off.

In choosing to antagonize PAS its erstwhile ally, DAP is playing the most self-destructive politics and causing injury to the Chinese community that is foolishly backing the evangelical party to the hilt.

So divorced are DAP and its supporters from reality that they’re now pinning high hopes on the (soon to be axed) PAS “progressives”. The Chinese are delusional in thinking that the PAS renegades planning to take over Zaid Ibrahim’s party will be the Malay component able to carry the DAP to Putrajaya.

Najib’s 1MDB troubles, and the fact that he is under fire by Tun and Umno’s own supporters, have emboldened the Chinese to be kurang ajar in their attacks currently on the Umno president and his party. The insufferable public behaviour displayed by the Chinese seizing on Najib’s travails has sealed their biaDAP reputation.

Malay backlash against this intolerable biadabness will come – it’s not a matter of ‘if’ but ‘when’. It will be sooner than you think.