Finally, and at long last, the PM has openly acknowledged how destructive and deadly the Dapsters are.

We the victims (I’m referring to the 10 percent Chinese who voted BN in GE13) have been the target of vicious attack by the DAP rabid venomous mob for years on end now.

We feel let down and betrayed that all this while the BN – Umno with its ample resources and MCA with its media empire – have allowed the Dapsters to run riot terrorizing the cyber/countryside ever since the DAP’s ascendency in 2008.

Worse still is the Api Dalam Sekam MCA whose Gunting Dalam Lipatan-Nest of Evangelistas are supporting and promoting the DAP’s evangelical Christians.

BELOW: Datuk Huan is Gerakan ex-vice president and a former MP

If you declare war against the Red Bean Army, just do it!

Wipe out this scourge!

If Umno keyboard warriors wanna confront the Red Beanies, they should go to Annie and Rocky’s blogs which are infested by Dapsters.

I believe Rocky, for one, would not mind reinforcements to restore some balance of a fight in his comments section that is currently so lopsided even the blog host himself is continually bashed by his own pro-DAP readers.

The Umno keyboard warriors are also welcome to come to my blog and face-off the Beanies (though very few are here) in the comments section.

The sneaky bastards are beyond creepy

The oppo cybertroopers are crafty chameleons, just like their Jerusubang icons who masquerade in tudung while visiting mosques. These cyber operatives have no qualms in taking on fake Malay and Muslim IDs online.

Here’s one example (below) of the cytro sneaky bastards in action:

Obviously Mr.F is trying too hard.

His use of casual BM and short-form spelling is so strained that it works to the opposite effect of calling attention to the actual or ‘real’ ethnicity of the posturing author.

Below is another sample of Mr.F’s handiwork:

Art of War: Know your enemy

I hope the Umno keyboard warriors will look and learn from the above. Realise how immeasurably sneaky they are.

Always remember that these people do not have and nor do they observe any boundaries in their action. Their capacity to fitnah and putar-belit is boundless.

Below is one cytro calling himself “AkuMelayu” but praising Allah with the salutation “s.a.w” instead of correctly, swt. Of course he’s not a Malay.

… they will trip and make mistakes.

Below is another cytro calling himself ‘Umno portal’ and claiming to be an Umno member but letting slip that he enjoys sipping red wine.

If Umno doesn’t start fighting back, be prepared to lose Putrajaya

They’re everywhere these camouflaged RBAs and spreading all kinds of slander and the ones creating the most insidious fitnah are the DAP evangelistas.

And then there is ‘Azhar‘ whom 83 percent of my poll respondents – see below – believe is not a Malay even though he pretends to be one online when making all his pro-opposition comments.

Note: The poll below ran for 24 hours

I’m all for Najib Razak recruiting an Umno cyber army to battle the DAP who are no longer communists in the jungle armed with rifles and bayonets. Instead the Dapsters are waging a war of attrition in the concrete jungle armed with digital devices.

To battle the dajjal, PM must go all out and cannot afford to adopt only half-measures.

The DAP has no mercy and will show Umno none. This is the most important lesson that Najib’s war cabinet should internalize.

“There is no avoiding war; it can only be postponed to the advantage of others.” – Niccolo Machiavelli 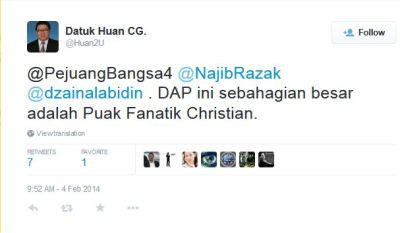 125 thoughts on “Najib cannot avoid or delay the necessary war”