The pix of the two short, jaundiced/yellow and round-faced women (below) in my previous posting is quite unappealing and rather a punishment on my poor readers. It shows Bersih chairman Maria Chin Abdullah standing behind Hannah Yeoh.

So I’m updating this page with a more attractive option of tall and tanned An Officer and A Gentleman instead.

The man standing behind is Perkasa sec-gen Syed Hassan Syed Ali. The man in front of him is Perkasa exco Major-General (B) Datuk Malik Sahar.

Syed Hassan however appears to be unclear on the concept. If you wanna do cute bunny ears, you need to raise two fingers in a ‘V’ shape – as illustrated by Siti Hasmah and Tun (below).

And it’s also more fun if both Syed Hassan and Datuk Malik were to smile a bit. 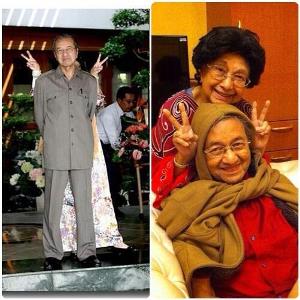 Alternatively you could look at pencils being sharpened. I like the picture below. Honest.

I’m a fan of pencils.

However, to cater to readers who are not fans of Bersih/Hannah, or of Perkasa, and nor of Staedtler pencils, below is a video clip of two handsome men singing a Mandarin song … La la la la la … Click and enjoy.

I do think Perkasa should state their stance on the Bersih 4.0 rally.

We’d genuinely like to know the thoughts on this matter of the orthodox Malays in Perkasa, especially the military types like navy man Malik and his other Tentera Di-Raja friends on the issue of keeping law and order.

Come on Perkasa, make your views known. Where do you stand on Bersih 4.0?

Don’t tell me now that Ibrahim Ali has fallen in love with the harmonious evangelistas, Perkasa is leaning towards the side of the peaceful Christians pula to do their peaceful march to topple Najib at the end of the month.