Do you remember the ‘1BlackMalaysia’ campaign by Bersih? See T-shirt below. Its tagline was “Democracy First! Elections Now!”

Bersih had declared in early 2009 that the takeover of the Pakatan Perak government by BN was undemocratic. Following the ouster of the Nizar administration, Bersih demanded fresh elections to be held immediately in the state.

The ‘1BlackMalaysia’ campaign led by Bersih’s Wong Chin Huat (pix below) was launched on 5 May 2009 to protest the toppling of Pakatan in Perak. Police arrested Chin Huat on the same day under a sedition charge.

(Chin Huat is currently a faculty member of the Penang Institute, a Guan Eng-created state think-tank.) 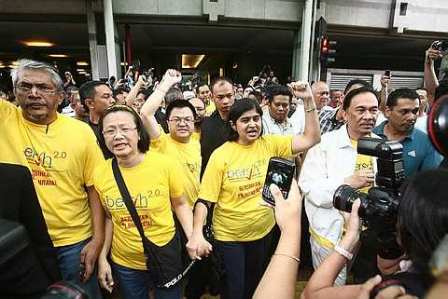 Bersih objected to defections from DAP and PKR

The Pakatan government fell in February 2009 after the Aduns of Jelapang, Behrang and Changkat Jering declared themselves to be independent but BN-friendly elected representatives of Perak.

Their withdrawal from the ruling coalition caused Pakatan to lose its slim majority in the state legislative assembly.

A fourth Adun, YB Bota Nasarudin Hashim (pix below), had earlier defected to PKR from Umno on Jan 25 – note that Anwar Ibrahim had no qualms about accepting a “frog”.

After Nasarudin’s pullout from PKR to rejoin Umno after barely a week (Feb 4), the balance in the Perak Dewan was altered to become BN 28 seats, Pakatan 28 seats, Independents 3 seats.

Bersih vehemently objected to the defectors being allowed to retain the Perak state seats they had won on party tickets and demanded a fresh election / re-election.

When the DAP and PKR Yang Berhormats left their parties and the departure rocked the Perak state government, Bersih raised strong objections.

However when PAS Yang Berhormats left / are leaving their party in a mass exodus, and taking along with them the Parliament and DUN seats which they had won under the ‘Bulan’ banner, Bersih is strangely silent.

The last thing Bersih is is non-partisan and ‘fair’

Not only has her NGO failed to raise a ruckus in the case of PAS’s Selangor YBs defecting like how Bersih did over the Perak controversy, Maria herself did not even see anything amiss in attending the launch ceremony of the New Hope’s Selangor chapter.

See photo below of the New Hope event held in Shah Alam recently on Sunday, and Maria joining the photo call along with the PAS renegades and Madame Speaker.

Bersih has no moral standing to claim to be fighting for “free and fair elections” when their own double standards and bias is so evident.

To Bersih, it is unethical when the action of DAP’s Jelapang elected rep is detrimental to Pakatan. Nonetheless ethics fly out the window like an Ubah hornbill when the same action by PAS “progressive” elected reps is expedient for DAP, which is sponsoring the Islamist proxies.

Here’s another flashback from May 2009 – photo below. Seated beside Bersih’s Wong Chin Huat was PAS’s then Kuala Selangor MP Dr Dzulkefly Ahmad. He was at the press conference to denounce the Perak party hoppers.

Today Dr Dzul is a member of the incipient splinter party soon to break away from PAS.

Will the former PAS Parliamentarian now similarly denounce his New Hope colleagues for their defection and taking along with them the Parliament and DUN seats that these YBs had won on their (ex-) party ticket? I’m guessing not.

The opposition is filled with hypocritical politicians who are supported by ‘Bak Kut Teh is not pork’ kind of people. And when we point out their hypocrisy and double standards, the Dapster-evangelistas will intensify their smear campaign against us.

BELOW: Integrity Meter invented by ex-Bersih steering committee member Haris Ibrahim – the gadget was used by Haris to zap at Pakatan/opposition politicians who were suspected to be wavering in loyalty to their respective parties.

Taking his meter reading, Haris would then pronounce whether the said politician had integrity or not. The pro-DAP Haris is another hypocrite. DAP is full of ’em.

Bersih leader: IGP regards “citizens as mosquitoes to be squashed”

14 thoughts on “Party hopping: Hypocrisy and double standards of Bersih 4.0”