There’s the Creepy Christian named May Chee and her message of ‘love’. Her appeal is titled ‘There is no fear in love’, where she expended 836 words in prepping up readers to join Bersih 4.0.

#Letters There is no fear in love – A man who would suggest some eons ago, the culling of some laws that were oppr… http://t.co/y9O6TD7ACV

May Chee writes, “Those of us who love Malaysia are not a minority.”

May Chee asks, “How can we keep quiet when our beloved and much blessed motherland, is now all but bankrupt?”

She asks also, “How can we keep quiet when there’s outright violation of our rights to eat, breathe and love in our very own beloved motherland?”

She asks some more, “How can we keep quiet when … he’s [referring to the ‘leader’/Najib] destroying all that is dear to us – our beloved motherland and the fate of our fellow Malaysians?”

Obviously May Chee is not keeping quiet. She is bising-bising and vocal in encouraging her fellow Christians, Chinese and Firsters to take part in the rally later this afternoon. And she’s doing this in the name of love.

someone quoted on facebook : TRUE LOVE NARROWS THE DIFFERENCES. Racists must be taught how to love.

May Chee: “There’s no fear in love”

“Bersih 4 never turns unruly,” May Chee assures everybody, adding, “Bersih 4, like all Bersihs, will be the leaven of authentic democracy that we, Malaysians, truly deserve”.

May Chee concludes her Bersih 4.0 appeal by urging:

“Come, show Malaysia that it’s okay to love her so shamelessly, in spite of all the abuses she has gone through. In spite of what she has become, today.

“Come, and show the whole world that, there’s no fear in love.”

May Chee: “Cowardice is the mother of cruelty”

The brave and fearless Ms Chee had in 2012 shared with all her Bersih 3.0 story ‘Cowardice is the mother of cruelty’ in TMI.

A few months before GE13, she told the world that she would be voting PAS. A year after GE13, she wrote an article headlined ‘Let’s claim our country back‘ (TMI, 6 May 2014).

She had also penned this cryptic Christian message – see above – directed at Tun Mahathir @ https://harismibrahim.wordpress.com/2014/03/20/apologise-to-you-doc/#comment-105982

I’ve blogged previously about May Chee. My 7 May 2014 write-up was titled, ‘The Christian love for PAS … just too creepy for words’.

Power to the self-righteous people

Like May Chee, another “fearless” writer is Kee Thuan Chye who bravely declared, “This weekend, those of us who will gather around Dataran Merdeka need not fear”.

He proclaimed, “We will be walking on the side of right. That will be our strength and our protection”. His appeal to Malaysians to participate in Bersih, ‘This weekend, stand up for our country‘ was published two days ago.

BELOW: Kee’s book launch graced by the Chief Minister of Penang

About Bersih 4.0, Kee wrote in Malaysiakini, “Many Malaysians have been waiting for this, and now it is coming at a poignant moment in our nation’s history – our confrontation with a corrupt system concretised vividly in the form of a man [Najib] …”

Fanning the spirit of his readers, Kee tells them, “This is a moment we have never experienced before. At no time in our history has a single person in the highest office of the land drawn so many Malaysians together to go against him”.

In a show of bravado, Kee postures, “We must capture this moment, exercise our power as citizens of a democracy, as stakeholders of this land, to show this man that our power is greater than his …”

Kee: “As patriots, it is our duty to save our country”

Although Kee Thuan Chye (retired journalist, playwright, actor, blogger) describes Bersih 4.0 as an endeavour that could subject the protesters “to harsh reprisals by the forces of the dark side”, nonetheless, it is the chance for his countrymen to “move forward towards a better Malaysia”.

He adds that he understands Bersih 4.0 to be about securing “a brighter future for our children and their children” because as “patriots, it is our duty to save our country from a government that is corrupt, self-serving and incompetent – in short, a government that sucks”.

Promoting the Bersih rally, Kee cried, “We must turn up in numbers never seen before in a street demonstration in Kuala Lumpur – and walk for them, for the future generations, and even for ourselves. So that in years to come, we may hopefully look back and be proud that we did our bit for the sake of our people. And for our country”. 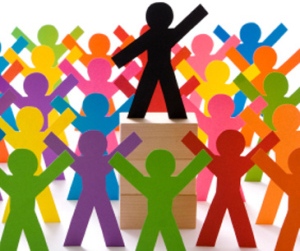 Such ‘inspiring’, chest-thumping speeches from the Malaysian Firsters standing atop the new media soapbox.

Anyway, there you have it. A couple of examples of the fiery rhetoric by Chinese polemicists Ms Chee and Mr Kee in the media to fire up their compatriots who will be braving the streets of Kuala Lumpur this weekend.

And then on the other side, you have us – the outcast 10 percent Chinese.

Below is the result of a Perception towards Bersih 4.0 opinion survey conducted by Merdeka Center. It shows the views on Bersih by respondents according to their ethnicity. 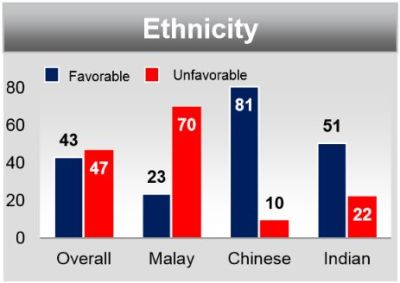 For the record, my view is aligned with the one-out-of-10 Chinese holdouts against the DAP mainstream.

Rather than the “fear not” which the Firsters are preaching most fierily, I’d instead advise caution and discretion.

But then our cautious voices are drowned out by the loud, over-confident 90 percent and furthermore, there is no public platform available to us to air our opinions. (I had to create my own platform from scratch, which is this blog, and building it entirely on my own resources.)

‘They’ – the majority Chinese – are truly lost to us (the minority 10 percent). They prefer to listen to and be persuaded by the Chees and the Kees. And to Loyar Buroks – ‘Dear Paprika: Saya Akan Ke BERSIH‘, and many others of their ilk all chanting the Colour Blind mantra.

‘We’ are Chinese but ‘they’ are not

And by the way, ‘they’ do not see themselves as ‘Chinese’, okay. They are ‘Malaysians’. First.

We the 10 percent are the ones admitting ourselves to be Cina. For the “zero Chinese, we’re all Malaysians” types like Hannah Yeoh, C-I-N-A is a four letter word.

Hannah even characterizes some of us as those despicably Malaysian Last racists who hold “extreme views”. In fact, Madame Speaker had called on her fellow Malaysians to “reject such [extreme Chinese] mindsets if they hoped to move the country forward”.

Hannah, May Chee, Kee Thuan Chye and the other Firsters all echo each other in their approach of how to “move forward towards a better Malaysia”. They’re marching for their vision of a ‘Beyond Race’ Malaysia today.