How schweeet. Someone gave Ambiga flowers.

Dapster family – The brave & the fearless

Papa Dapster Guan Eng quoted by FMT as saying, “I believe when the country’s leaders see us gathering here today, they will not be able to sleep.”

Former Johor DAP deputy chairman Norman Fernandez texted: “Notice the ‘brave leaders’ without the words Bersih 4 on their T-shirts so that they and they alone don’t fall foul of the law”.

The Penang Chief Minister and his dad were not wearing the Bersih T-shirt. They wore yellow T-shirts but without the ‘Bersih’ word however which has been prohibited by the Home Ministry. 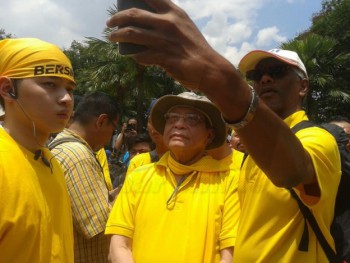 The reticence of the Lims is understandable.

If it’s really against the law to wear Bersih 4 apparel as widely reported, then Grandpapa and Papa Dapster could both be arrested and charged. And if found guilty of contravening the law (Home Ministry gazette) and punished by the court with a fine or jail sentence, they stand to be disqualified from their state and Parliament seats.

It also seems like Mama Dapster was no show at the rally today.

Discretion is the better part  of valour.

But no worries. The Dapster family got their hundred of thousands of fanatical followers to do the dirty (or in this case, kononnya the ‘clean’) for the beloved DAP icons.