Their similarity is that both were ultra kiasu.

The difference between 5 May 2013 and 30 Aug 2015 is the degree of saturation. The Chinese at the present moment in time are very, very committed to the DAP.

Even MCA is hitting the panic button. It didn’t help that the party’s former president attended Bersih. How is MCA going to explain this to the BN chairman?

BELOW: The young man pictured with Tun Ling Liong Sik is wearing a T-shirt that says “Ubah Bersihkan Malaysia” with a photo of Lim Guan Eng 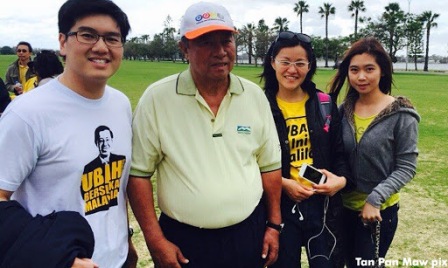 MCA president Liow Tiong Lai issued a press statement yesterday saying how alarmed his party is by the DAP’s “confrontational political approach” that is “creating tension in our society”.

He also condemned the “seeds of hatred” that are being sown by his rival party and added that the DAP had hijacked Bersih 4.0.

Yellow is the ‘ong’ colour 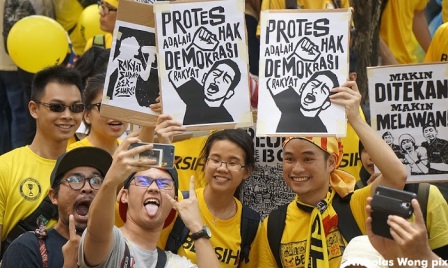 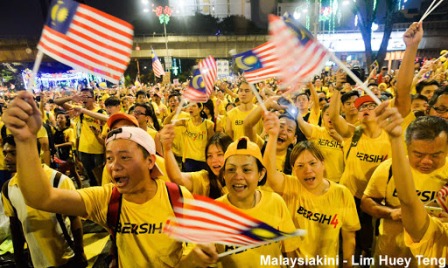 Bersih 4.0 was saturated by the Chinese, from the young to the old.

Nonetheless all these yellow shirts are like aliens from another world. They’re insensitive, for example, in bringing brooms to the rally.

Maria Chin excused the brooms by saying they merely symbolized “the cleaning up of a corrupt government” and were not intended to stoke racism” – see FMT report yesterday, ‘Maria and Bung disagree over Bersih’s broom‘.

Although Maria downplayed their significance, the incident nonetheless testifies to the wide cultural gap between the Chinese and the Malays who were upset at the sight of the brooms held high in the air.

The Chinese Tsunami 2.0 spooked the Malays who fear being swept by the yellow tidal wave into the sea.

BELOW: The (in)famous Aunty Bersih

17 thoughts on “The difference between Tsunami 1.0 and Tsunami 2.0”