For bragging rights – “my rally is bigger than your rally” – and to preserve the dignity of the Melayus, the Tanah Tumpahnya Darahku Sept 16 counter demo should at least have a minimum threshold of participants.

I’ll do the math on how many Malays need to show up in red T-shirts to save Umno some face.

Something like 85 percent (rough estimate) of the Bersih 4.0 protesters were Chinese. That’s 42,500.

Most of those attending the Bersih rally were from Selangor and the Federal Territory albeit the diehard DAP supporters had also made their way from outstation to KL for the event.

So let’s have a look at the Klang Valley demographics.

Altogether there are 2,169,800 Chinese living in the Klang Valley.

Possibly some 42,500 Chinese turned out for Bersih 4.0. This 42.5k figure is equal to 1.96 percent of the Klang Valley’s Chinese population. But let’s round it up to two percent for convenience.

Next we’ll crunch the numbers in order to set a benchmark for the Malays.

Altogether there are 3,764,300 Malays living in the Klang Valley.

Matching the ratio of Chinese turnout for Bersih 4.0 will require at least two percent of the 3.76 million Klang Valley Malays to take to the streets. The magic number is 75,286. You all have a bigger population pool to draw from, okay.

Expecting the Malay NGOs and Umno to muster 75k supporters to take part in the planned Himpunan Maruah Melayu is a bridge too far. I’m not sure they can manage to rustle up 7,500 demonstrators even – a lowly target at that.

In fact, I anticipate the Sept 16 “Hidup Melayu!” project to fizzle out like several other gempak by the Red Shirts previously.

Now why are Malaysians so dismissive of attaching any street cred to Umno?

BELOW: DAP Yang Berhormats line up in a row to support Bersih 4.0

The difference between the Yellow Shirts and the Red Shirts is this – there is greater public trust in the opposition and a “trust deficit” moreover where Umno is concerned.

This is because DAP delivers. The Dapsters are solidly united in their commitment to the cause whereas Umno cybertroopers (Tun’s camp vs Najib’s camp) are more preoccupied with ‘killing’ each other.

Despite police declaring the Aug 30 rally illegal and banning yellow T-shirts bearing the ‘Bersih’ legend, we were still confident that the oppo-aligned rally would nonetheless proceed on its scheduled date.

In other words, we trusted that Yellow Shirts would carry out what they promised to do while with the Red Shirts, there is already the tried-and-tested (or proven) expectation that they will U-turn from their chest-thumping public avowals.

After the roof tile-breaking display recently by their silat (or whatever) group, the Red Shirts quietly withdrew from staging a counter demo to Bersih 4.0 during the Merdeka weekend.

It is the same story over the past Bersihs. In 2011, Ibrahim Ali had similarly proclaimed that his Perkasa members would counter Bersih 2.0. Quite predictably, the Kelantan loudmouth called off his threat when D-Day came around.

Here’s one indication that the Himpunan Maruah Melayu will be a damp squib going by the Red Shirts’ unimpressive track record.

The Bersih 4.0 T-shirts were flying off the shelves until the vendors ran out of yellow.

Bersih’s simple logo design makes its iconic T-shirt easily recognizable. On the other hand, have you seen the Maruah Melayu T-shirt (picture right) ere this?

The contrast in the level of promo and publicity between the Yellows and the Reds is a testimony to the better organizing skills of the Bersih committee as well as the RBA’s tentacles gripping social media.

In comparison, the Red Shirts campaign is all caca marba.

Federal Territories Umno Youth chief Razlan Rafii (2014 file pix below) promised Maria Chin that he and his boys will face-off her Yellow Shirts when they do Bersih 5.0 in future. 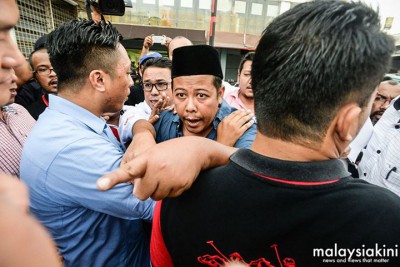