The Umno leadership has not only been moving to the right but radicalizing. Frankly, they don’t give a damn about MCA anymore.

MCA which used to serve as a buffer for the Chinese can no longer play this protective role after losing 90 percent of the community to the DAP.

The Chinese will now have to look to their demigods the Dapster family to provide tangkal azimat and holy water.

MCA: DAP to blame for Malay anger, not Chinese https://t.co/jcgbEnhlp0

.
Are the Umno hawks circling?

It has been widely reported that Agriculture Minister Ismail Sabri Yaakob will be sending Umno Bera division members to take part in the Red Shirts rally planned for Sept 16.

Mohd Ali Rustam, the Malacca chief minister who was swept away by the Chinese tsunami on 5 May 2013, is also reportedly involved in organizing the participation of silat groups under the umbrella of Pesaka.

BELOW: Hannah & her Evangelistas pledge to save Malaysia

Can you guys help provide me with feedback, please?

May I ask what’s the chatter currently on Facebook, WhatsApp and other social media? What is really happening among the grassroots?

“By the way Helen,

“In my FB wall’s a lots of people’s becomes bonkers due to Baju Merah. It’s all about no no no.

“But funniest things is the Malay side getting quiet in the FB but rampantly reminding Malay to joint in in wassup or at least wear baju merah when go out this 16 Sept. Hmmmm“

A spooky silence that smells like calm before the storm. 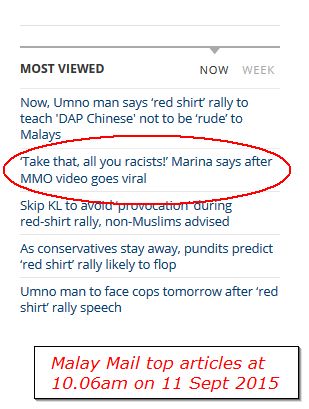 The Malay Mail has spun into overdrive to project the Red Shirts rally planned for Sept 16 as “likely to flop”.

Its lead story this morning is headlined ‘As conservatives stay away, pundits predict ‘red shirt’ rally likely to flop’.

“Political pundits contacted by Malay Mail Online pointed out that while some Umno leaders and lesser known Malay groups have pledged support for the rally touted as an avenue for the race to defend their dignity and counter the purportedly Chinese dominated Bersih 4 protest, those that usually champion racial rights like Perkasa and Ikatan Muslimin Malaysia (Isma) have been quick to distance themselves ― at least in active support of it.”

FIRST OF ALL, do keep in mind that the pro-Christian oppo media are unabashed spinners. For example, the Malay Mail says above – “the purportedly Chinese dominated Bersih 4 protest”.

Anyone with a pair of eyes can see that Chinese domination of Bersih 4.0 is a fact, and not “purported” (dictionary definition of the word purported – “said to be true or real but not definitely true or real“).

When facts do not favour them, the oppo media are quick to tack on disingenuous disclaimers such as “purported”.

But when it comes to reporting mere claims and allegations leveled against the establishment, this same oppo media will, on the other hand, portray the accusations as fact. Sneaky bastards!

SECONDLY, who are the “political pundits” contacted by the Malay Mail and conveying the idea that the Sept 16 rally is likely to flop?

Let’s see. The analysts quoted in the Malay Mail story are:

Wow, speaking to a total of three individuals and Malay Mail can come up with its banner headline conclusion.

I wonder if Asia Institute director Prof. Chin is now in Malaysia or Tasmania (location map above). Ditto CPI director Dr Lim – is he even here locally or overseas? How well are they reading the sentiments on the Malay ground?

THIRDLY, “those that usually champion racial rights like Perkasa and Ikatan Muslimin Malaysia (Isma) have been quick to distance themselves” from the Red Shirts rally, according to the Malay Mail report.

It’s correct that Isma is dismissive of the Red Shirts rally.

Perkasa’s Facebook and website have not been updated for us to reference. Nonetheless, the Malay Mail quoted Ibrahim Ali as saying “Perkasa is not involved by name, but Perkasa members are free to attend, though only in their personal capacity”.

BELOW: Look ma, no keris

The archetypal Red Shirt presently looks like the sample above.

Because the rally organizers wish to reassure MCA, DAP and Bukit Bintang traders that the gathering will be ‘peaceful’, the pendekar Melayu in the T-shirt drawing has been disarmed of his keris.

The Chinese however don’t appear to believe the reassurances, judging from the MCA and DAP panicky responses.

BELOW: My skull is thicker than your skull

PAS is not mobilizing for Himpunan Maruah Melayu, just as it did not mobilize for Bersih 4.0. It’s smart of the Islamist party to stay on the sidelines and just watch the Umno vs DAP rumble as a spectator sport.

Make no mistake – the Red Shirts and the Yellow Shirts are indeed proxies for the No.1 and No.2 most powerful parties in the country to flex their political muscle, to borrow Tunku Aziz’s phrase.

The Malay Mail‘s Sept 8 article said that like Perkasa, PAS has similarly distanced itself from the coming rally. Well, not exactly.

For those who read bahasa Melayu, what PAS sec-gen Takiyuddin Hassan (above) actually said in his press statement:

.
BELOW: This poster of Najib as Darth Vader was given a Special Mention in the Bersih 4.0 art competition

Actions and reactions by the Chinese

The J-Star today reported Kuala Lumpur Hawkers and Petty Traders Association chairman Ang Say Tee as saying about 90 percent of Petaling Street traders would not open for business on the day of the planned rally.

Cenbet chief Gan Ping Sieu (a former MCA vice president) said in his letter to the editor that the rally’s choice of venues at Low Yat and Petaling Street as well as “the bloodshed posters that went viral … all point to one thing – malice, ill will, hatred and possible violence”.

Below is the tipu headline that appeared in the Malay Mail versus Isma’s real content.