The Baju Merah taiko was quoted by the media as saying “Cina babi” is not a slur since after all, the Chinese love eating pork.

Jamal Sekinchan is doing what the sneaky bastards did when they claimed that Bak Kut Teh is not pork. Of course any Chinese would be well aware that BKT is pork just as Jamal is equally aware how offensive the taunt “Cina babi” is.

But then, recall that the Chinese did pakat-pakat to pretend Alvin Tan’s invitation for Muslims to buka puasa with Bak Kut Teh was not a deliberate insult.

They even went to the extent of pretending the BKT dish could be yummy chicken. Or wait! It could even have been organic vegetarian Bak Kut Teh.

So now we have this Jamal Sekinchan enter frame and pretending with an equal amount of insouciance that “Cina babi” is as inoffensive as Alvin’s Bak Kut Teh invite.

The man showing the Thumbs Up sign above is not Jamal. His photo is uploaded here for illustrative purpose only – his red T-shirt says “Allah for Muslim, fight no fear”.

.
BELOW: Bak Kut Teh lover Hannah Yeoh has to diet, kesiannya

You get what you give in ample returns

So the Red Shirts are now giving back. The first salvo was on Sept 16. The second volley is planned for Oct 10. 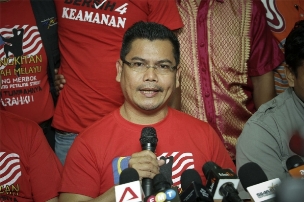 It would indeed be tempting for Jamal Sekinchan (above) to serve the revenge dish red piping hot to the ultra kiasu Penang Chief Minister in his own state. Beard the lion in its den, so to speak.

BELOW: 16 Sept 2015 … the day the Red rally 1.0 struck back at Bersih 4.0. The Reds have to stage three more rallies though in order to catch up with the Yellows but never mind, Oct 10 is only three weeks away

Some sections of the rally look like a rather rough crowd. Plus the Reds have explicitly warned, “Jangan cabar kami orang Melayu”.

Guan Eng the pale, flabby “failed accountant” is probably scared chickenshit they would really descend upon his state and hooking up with the Penang mamaks on top of that. 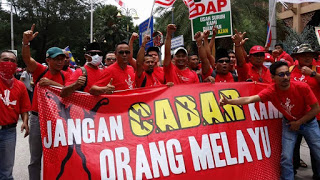 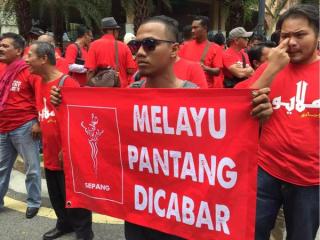 In his blog commentary today,  Lim Kit Siang said the Red rally “represents the past of race politics which could only end up with Malaysia as a failed state and a basket-case in international society”.

Grandpapa Dapster predicts that Malaysia is a potential “basket case” which will go rogue soon and becoming a “failed state”.

Kit Siang similarly deemed the Red rally to be “a failure”.

BELOW: DAP legislators have made police reports against the rally goers for linking Kit Siang to May 13

My rally better and longer than your rally

While the Bersih overnight rally was “a carnival of democracy and human rights”, Kit Siang considers that the Red rally, on the other hand, has failed to bring Malaysians together by transcending race, religion, region, age, gender and politics.

Furthermore, unlike Bersih 4.0 he added, the Red rally was not conducted for a common national cause to promote good governance, accountability and integrity.

(Funny how the Dapsters are not asking the past-his-shelf-life Kit Siang to ‘undur’ from politics as well.)

According to Kit Siang, it has been estimated that on

Nonetheless for Bersih 4.0, where the Chinese predominated, a record was set for the longest lasting rally spread over 34 hours. In comparison, the Red Shirts rally dispersed after only less than five hours although it was bruited as a 10-hour event, scoffed Kit Siang.

It’s been close to five decades since May 13 but Kit Siang has not matured in his outlook and deportment.

His son Guan Eng Papa Dapster and their protege Hannah Mama Dapster are not much different from the DAP spiritual leader. The fruit does not fall far from the tree.

It is the DAP that caused the Red Shirts backlash – note the keris motif in the rally announcement poster right. If not for the doings of the DAP, the Malays would not be this angry.

BELOW: The rakyat are asked to tolak fitnah terhadap pemimpin – see banner

The Malays are fragmented at the moment and this disunity within the community has lent a misplaced confidence as well as giving rise to a false bravado among the Chinese.

He doesn’t sound like the benign Ah Jib Gor anymore now, does he? Well that’s what the Chinese get when they balas madu with tuba. 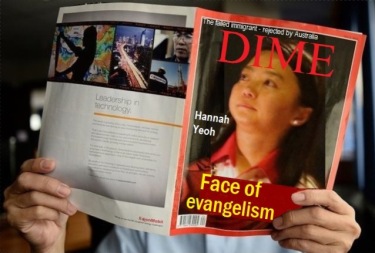 The keris was a popular design on the red T-shirts – see below.

Alongside the slogans “Bangkitlah Melayu” and placards saying, “DAP, jangan hina dan pandang rendah kepada orang Melayu Islam” are other expressions of loathing against the evangelical party both on the streets and in blogosphere and social media.

The Chinese really fail to realise the extent to which the DAP is hated, and lately due to the party’s Christian supremism.

Pity the Chinese for making enemies out of the Malay majority, all because of the overweening greed of the power hungry evangelistas whom the Dapsters have entrusted to lead. 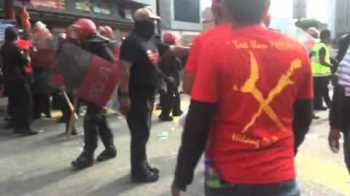 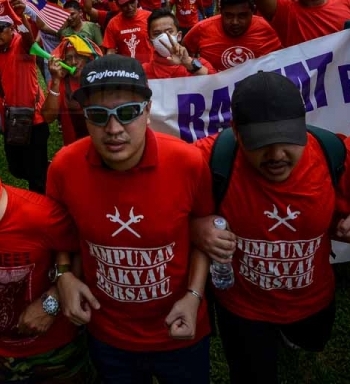 20 thoughts on “Evangelistas meeting their match in Jamal Sekinchan”