Najib Razak, in his speech titled ‘Countering and preventing the spread of violent extremism’ at a UN leaders’ summit (prelude to the UN general assembly debate), spoke two days ago about Malaysia’s determination to counter Muslim terrorists on the international front.

I shall mirror the PM’s speech – full text reproduced at bottom of page – to ask whether Umno is committed to battling Christian militants on our domestic front. The phrases I borrowed from Najib are rendered within quotation marks.

1. Is Umno even the least interested in “spearheading and galvanizing” the Malays to combat DAP which Jabatan Agama Islam Pahang and a substantial number of other religious figures believe to be anti-Islam?

3. Will Umno give those evangelistas in DAP “a clear choice” ultimatum? – “Renounce your virulent creed” (of hate and extremism) and “be guided back towards the righteous path, or face the consequences”.

4. Will the Umno-led government “strengthen the administrative and operational capacities of the relevant law enforcement authorities” to deal with the rapid radicalisation of DAP evangelistas?

5. Will Umno prevent the Dapsters from inflicting “their barbarity” on Malaysians who do not support the DAP and in the process ruining whatever racial goodwill that’s left between the various ethnic communities?

6. It is known that DAP “has harnessed a highly effective approach to communications and messaging. The so-called online terrorists have been deployed to devastating effect, inspiring too many of the impressionable, the vulnerable and the excluded to join their ranks” in Jerusubang.

Will Umno work with “police and cyber security to deal with this insidious threat” from the Dapster-evangelistas?

7. Presumably Umno has by now realised that a “focused attempt to counter the narrative and online presence of [DAP] is required”. Is Umno addressing this severe lack of “an overarching programme” to fight the Dapster-evangelistas?

8. What can Umno do to shore up any “important bulwark at the forefront of [nation]wide efforts” that can block the DAP messaging from being amplified?

9. Umno is fully aware “the lies that [DAP] employs are insidious”. Is Umno able to help the Malay ground be aware that “humbleness, compassion and love for our fellow man … are noble virtues that [DAP evangelistas] and their fellow extremists are lack totally”.

10. Is Umno ever going to do anything about the Nest of Evangelistas?

MCA and Gerakan finally stepped up to condemn the DAP for serving as inspiration and model for the Bersih 4.0 bad behaviour.

Utusan splashed the story today – above.

The J-Star has predictably buried it. The only coverage that the joint MCA-Gerakan press conference got in EvangeliSTAR Online was a short note yesterday accompanying a video embed – see below. There’s no coverage of the story today.

Below are the J-Star‘s top stories currently. 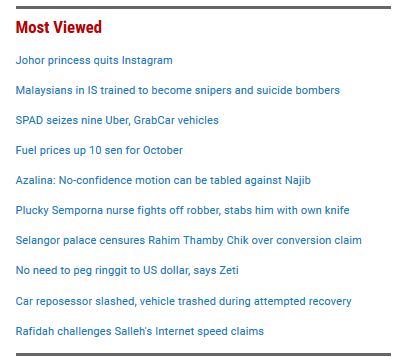 The listing of J-Star news stories today – here (page 1, page 2, page 3 & page 4) – does not contain any article on the condemnation by MCA and Gerakan of the DAP vis-a-vis the behaviour at Bersih 4.0.

Sudah terang lagi bersuluh. It should now be beyond any shadow of a doubt that the Scissorati are stabbing a lethal gunting in the BN’s back.

BELOW: Full text of Najib’s speech