To date, Wisma Putra has not rebuked the Singapore ambassador-at-large.

This can only mean that our Foreign Ministry views our neighbour’s roving ambassador Bilahari Kausikan as telling the truth, the whole truth and nothing but the truth.

BELOW: Tony Pua’s lack of manners

But how do we know that the facts as stated by ambassador Kausikan are correct?

DAP supporters going berserk is a sure sign that what’s being said is all true.

“Sir, to attract this much hatred, you must be doing something right,” a Facebooker by the name of Tan Yijun had suggested to His Excellency Mr Kausikan in the latter’s FB.

Kausikan, who is a highest-ranking diplomat, made a rejoiner that the “emotions on display prove my point”.

The ambassador also said, “If calling me and Singapore names makes him [Tony Pua] feel better, I fully understand. But it is not going to change reality.” 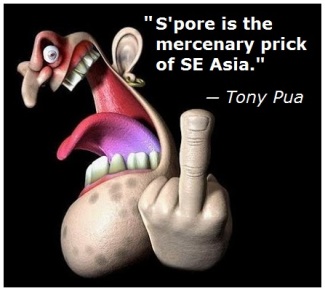 Retorting to Kausikan, Tony Pua said earlier in his Facebook that Singapore is perceived as “the mercenary prick of Southeast Asia”. (Tsk, tsk, the DAP evangelistas should really endeavour to stay classy.)

Delusional is as delusional does.

“But does it [venting] really change anything?” asks the ambassador knowing full well that reality is. 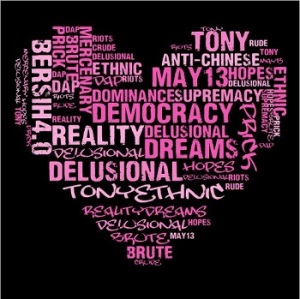 What is Tony Pua smoking?

The DAP legislator said: “I argued that you attended Bersih4 not to make racial demands but to express your aspirations for a better Malaysia, defined by justice, good governance and democratic ideals.”

According to the DAP Petaling Jaya Utara MP, “Mr Bilahari responded on his Facebook to tell us that while he ‘respected’ our hopes, we should stop our pipe dreams. In effect, his valuable advice is to quit whatever we are smoking.” (You go, Mr Ambassador!)

Malaysian Firsters delude themselves that they’re colour blind. This delusional bunch also pretend that they’re beyond race and creed and above religion.

To recap some of the things Ambassador Kausikan said that caused the Dapsters to go ballistic:

Chinese not learning the lessons of May 13

Kausikan wrote in his Oct 6 article in The Straits Times, “It is my impression that many young Malaysian Chinese have forgotten the lessons of May 13, 1969”.

Alluding to a collision between racial/religious identities of the Chinese and the Malays, he expressed his “hope that the worst does not occur”.

In a speech delivered earlier this year in April during the launch of Wang Gungwu’s latest book, Kausikan described South-east Asia as “a region where the Chinese have generally not been an entirely welcome minority”.

(Cue for the Bintang Lima to rant and rave as to what a beloved minority they are, and their immeasurable contributions to nation-building.)

BELOW: If disaster does strike, it is most definitely the delusional DAP’s fault

The passage of half-a-year – since he spoke at eminent historian Prof. Wang’s April book launch – has not served to change the ambassador’s assessment of our volatile political landscape.

Two days ago Kausikan cautioned (see below), “But I fear this particular hope and dream [of the Cina DAP] may well lead to disaster; it did in the past …”. 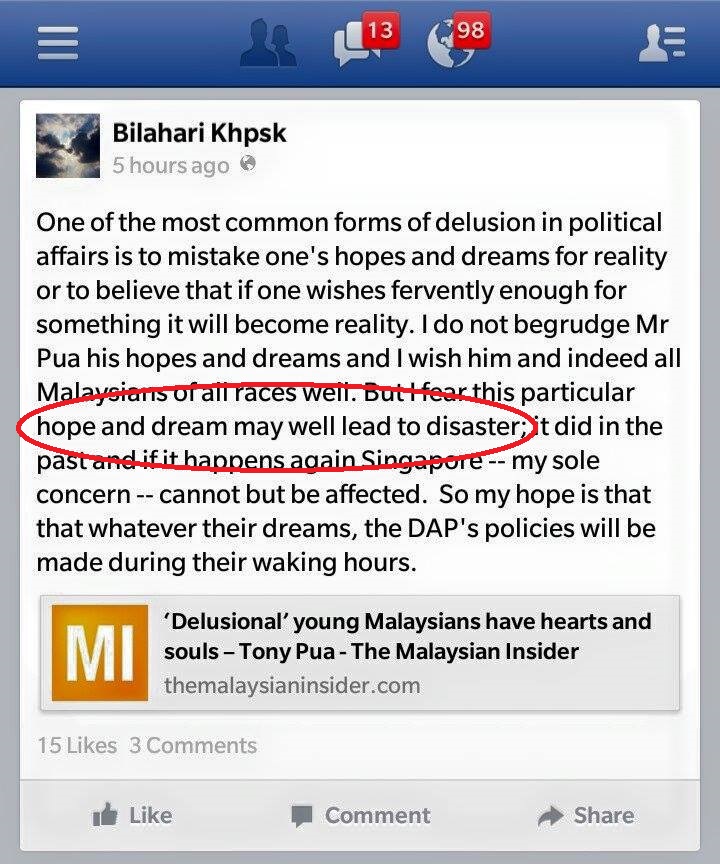