He urged Malaysians not to be misled by these “political dinosaurs living in their own delusions” who call the non-Malays “pendatang”. See J-Star article below.

Some intrepid reporter should ask Chong this: If your mother tongue is Chinese, then isn’t your motherland China?

Our mother tongue is the language our moms spoke to us as babies. The dictionary definition is “the language that a person learns to speak first“.

I’m sure Chong’s mother tongue, like mine, is Chinese. (I only learned to speak basic English at about the age of nine.)

Bahasa kebangsaan – the national language and lingua franca of this country – is clearly not our mother tongue either. As children, we were brought up speaking the language that originates from the Republic of China.

Furthermore, Chong’s contemporaries are delusional. So why should anyone be surprised that they’re called ‘pendatang’?

The immigration here by our forefathers is a neutral fact. Nonetheless Chong et al are reacting to the ‘P’ word like it was a four-letter word.

There’s no need to bring up the geographical origin of our ancestors in bad faith and with ill intent … unless the relationship between the races in Malaysia is very bad. If the kumbayah gang want to take umbrage at the ‘pendatang’ word, then they should admit that ethnic relations are now indeed very bad.

Has Chong ever stopped to think whether it is our own behaviour that is lacking goodwill and attracting the bad faith and ill intent of the taunters?

Being disparaged as “pendatang” is an indication that we’re not accepted even though we’re proper citizens born and bred here. Does Chong have any idea WHY we’re not being accepted despite his saying, “We have been here for three or four generations. This is our homeland …”

If this is our homeland, why did Big Mama Muniandy apply for Permanent Residence in Tasmania? She didn’t like the Home Sweet Home, meh? 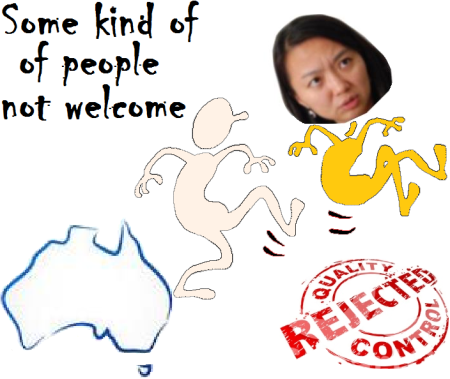