Singapore authorities found at least RM6.4 million (S$2.1 million) of City Harvest church funds were used to finance the Crossover Project “under the guise of donations to its affiliated church in Kuala Lumpur”.

The KL affiliate of the City Harvest church is located in Subang Jaya.

BELOW: Hannah Yeoh is on stage during a gala event in the Subang Jaya City Harvest church 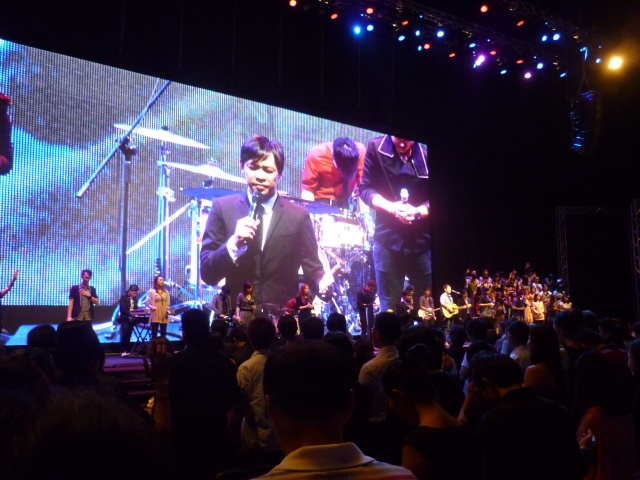 From the very start of the Singapore investigations, the City Harvest church in Subang Jaya was implicated in the corruption probe.

This piece of information on the City Harvest church’s criminal breach of trust (CBT) has been released to the public as early as mid-2012. The Straits Times on 26 June 2012 carried an article headlined ‘City Harvest’s Crossover Project lies at heart of CoC inquiry‘ which said:

“Funds from the church were diverted to finance the project under the guise of donations to its affliated church in Kuala Lumpur between December 2007 and May 2010.

“The church – City Harvest Church Kuala Lumpur – then transmitted the monies to support the project in the United States (US).”

CoC refers to the Commisioner of Charities.

BELOW: City Harvest pastors collect a lot of tithe (zakat) from the teeming mass of sheeple … The Devil Wears Prada and loves other branded things

3G: Gold, Self-Glory and Gospel is greedy scam by preachers

This piece of news has been in the public domain more than three years and even reported multiple times in our neighbour’s premier broadsheet. And mind you, the Straits Times is a Singapore government-controlled newspaper.

That the J-Star has not picked up on such a sordid saga of grave public interest only reflects a conspiracy of silence – a pattern that’s been discernible whenever it concerns reports which put evangelical Christianity and DAP evangelistas in a bad light.

Nest of Evangelistas, DAP are dajjal

All six of the City Harvest church elders and pastors have been found guilty in the Singapore court of all the charges against them. The prosecution featured 1,400 documents as exhibits in the course of 141 days of hearing.

The sensational case ran close to 3-and-½ years and was the most costly trial ever to be conducted in Singapore.

Yet all has been quiet on the Malaysian front over this mega scandal. BN must do something about this trend by the MCA-owned EvangeliSTAR newspaper to black out and bury any info that is unfavourable to the Born Again Christian cult.

The MACC should immediately liaise with their efficient Singapore counterparts who have successfully nailed the ‘Christian’ culprits. The City Harvest crooks are all looking at long jail sentences.

ABOVE: Church selling Bersih 4.0 T-shirts in its compound on a Sunday (screen grab from StarTV)

Now that the Singapore case has concluded with a guilty verdict, it should be the turn of Malaysian holy water dispensers in Subang Jaya to be put under scrutiny.

The Malaysian government must similarly investigate the RM2 churches too on their subversive activities, for example, in promoting the illegal 4.0 Bersih rally.

The authorities also ought to investigate the links between DAP evangelical politicians and these churches.