There is no meritocracy in the DAP, only dynastic politics. Those politicians slick enough to curry favour with the Kim Family (Kim Kit Siang and Kim Guan Eng) are given the plum positions.

Even though Selangor is among the country’s most mixed state population-wise, there is no Malay elected to the DAP exco. See below result of the Colour-Blind, Beyond-Race party election held yesterday. 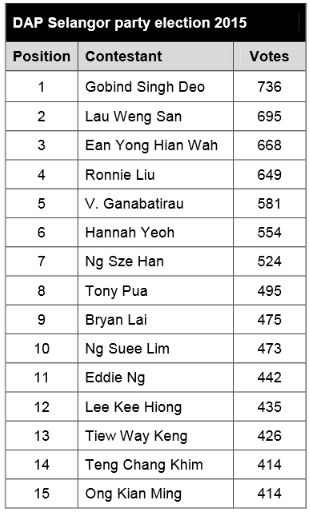 The DAP Selangor exco is a 15-member council.

Thirteen of the 15 seats are won by Chinese. One Punjabi and one Indian made the cut. No Malay, however, was endorsed by the DAP delegates.

The best-performing Malay finisher is Edry Faizal Eddy Yusof at 272 votes, which is a far distance (142 votes short) from the last contestant in the Top 15, i.e. Ong Kian Ming at 414 votes. Edry is coordinator of Roketkini.

‘Meritocracy’ party and its window dressing

Since no Malays succeeded on their own merit in the DAP Selangor party election, the party has to appoint three ‘Malaysians’ into the state committee – Edry, Abdul Aziz Bari and Young Syefura Othman (Rara).

The DAP Selangor election result also exposed the party’s hypocrisy. It was only three days ago that Lim Kit Siang taunted Najib Razak as “the first minority Prime Minister in the nation’s history”.

Well, Tony Pua is emphatically a “minority” chairman of DAP Selangor. He finished in eighth place only but is nonetheless elevated as DAP Selangor boss.

Hahaha, the kiasu party bestows chairmanship (No.1) on its blue-eyed Chinese boy who lost the “popular vote”.

BELOW: Even Hannah Yeoh at No.6 performed better than Tony Pua’s eighth place finish

Like DAP Johor which purged the old guard completely through its Oct 11 party election, DAP Selangor too is promoting the Lim cronies.

Rajiv Risyakaran (above, Hannah Yeoh’s former personal assistant) was appointed to the DAP exco along with fellow evangelista Yeo Bee Yin. The duo were placed No.26 and No.16 respectively in the party election yesterday.

The appointment of Rajiv is another indication of the DAP’s favouritism whereby Hindu members are sidelined in favour of Indian evangelical Christians.

DAP is a Cina kaw-kaw party

Four other Indians (excluding Ganabatirau who received the delegates’ mandate) finished ahead of Rajiv Rishyakaran but did not find favour with the party. DAP chose instead to let the evangelista Rajiv leapfrog over them in occupying the slot for appointed exco member.

Here’s how the Indians fared:

There were altogether 36 candidates vying for the 15 seats in the DAP Selangor exco.

Twenty-four Chinese and three Malays contested in DAP’s party election yesterday. Nine of the candidates are Indian (not counting Gobind as one).

Their success rate on making it to the elected exco:

In DAP, the Chinese rule!

Chinese are only a little more than a quarter of the Selangor population – see stats below – yet no Malay is accepted to be a leader in the state DAP.

Tengku Zulpuri Shah Raja Puji, who is DAP Adun Mentakab, failed to finish among the Top 15 in the recent party election Pahang chapter and was eliminated from the elected exco.

The DAP elections – including Zairil ‘Melayu’ Khir Johari’s inclusion via Excel – show the real face of the party. Don’t believe what they say (jual air liur). Assess them on what they do.

Wakakaka, and through their actions you see how DAP bikin tak serupa cakap. Malaysian First, konon.

u remove the 1Msia slogan, there is absolutely no difference btw Pak Lah & Najib's admin. Only a slogan.

Malaysia’s three most mixed states with an absolute Malay majority are:

Malays and Chinese are almost equal in number in the Federal Territory of Kuala Lumpur:

NOTE: Coincidentally, Johor and Perak have almost the same percentage of Malays in their population.

(All the percentages above are calculated from the 2010 population census and include residents who are not Malaysian citizens.)

17 thoughts on “DAP Malays need to get their eyes checked”