CFM protested that it is “wholly unacceptable for a public university, utilizing public funds, to undertake activities that demonizes a religious minority”.

Its chairman Rev. Eu Hong Seng not only took great offence but regarded the government’s act of condoning the seminar as most appalling.

BELOW: Perkasa once urged Rev. Eu to be charged under the Sedition Act

Rev. Eu is an evangelical Christian who founded the Full Gospel Tabernacle church in Subang Jaya.

Coincidentally, his was the church that in November 2012 invited Nurul Izzah to speak on religious freedom and where she controversially implied that Malays should be allowed to leave their faith.

CFM, the churches’ umbrella body, condemned the portrayal of its flock as a “threat” to national security when Christians are merely exercising their freedom of religion.

BELOW: Rev. Eu’s article in the Oct-Dec 2015 edition of Berita NECF

Country oppressed by a tyrant, konon

As his Christmas message in the NECF newsletter, Rev. Eu gave a sermon on biblical Egypt of Moses’ time where the “ruler of the day was no doubt despotic”. Referring to the Bible’s Old Testament book of Exodus, he said that under the Pharaoh’s rule, “workers were whipped at their masters’ fancy”.

Talking about the deliverance of the enslaved Jews from the evil despot, Rev. Eu recounted that “the main players were Pharaoh and his magicians, on one side, with Moses and the people of God, on the other”.

“The heart of Pharaoh was hardened at each phase right up to the very end. When the soul of the nation is at stake, one can expect a prolonged battle,” said Rev. Eu – see his article above, ‘Politics of the Gods: It’s Complicated’.

Moses and parable of the four ‘M’ cards

Rev. Eu editorialized in the latest edition of Berita NECF:

“In retracing the circumstances leading to the exodus, one would notice that there were four ‘M’ cards being played out during that time. ¹Egyptian antiquity records reveal the ketuanan mentality of the dominant race. Irrespective of one’s interpretation of biblical history or perspective of justice, the Egyptians were the Masters of the land – therein lies ‘M’ card #1.”

“After his demise, the succeeding Pharaohs, being poor students of history, did not acknowledge the contributions of Joseph and the Jewish people. ²The Egyptians ended up treating the Jewish populace as mere settlers – a source of cheap, if not free, labor. Imagine the chagrin of the employers to have thousands of their workers leaving their worksite merely to worship – this was ‘M’ card #2 – it’s all about Money.

“At the sight of the Jews fleeing towards the Red Sea after the last plague affecting the firstborn, Pharaoh hardened his heart again exclaiming, ‘Why have we done this, that we have let Israel go from serving us?’ (Exodus 14:5). The potential loss of Manpower was ‘M’ Card #3. It was the same issue in their first encounter when the king of Egypt screamed at Moses: ‘Why do you take the people from their work? Get back to your labor.’ (Exodus 5:4)

“While these cards may simply be seen as mere differences in policies, labor disputes, human rights to freedom of worship and mere politics of man, it is the fourth ‘M’ card that reveals that there is more than that which meets the eye.

“At the onset when Aaron’s miraculous rod turned into a serpent as a sign that Moses was ‘the voice’ sent by God, Pharaoh summoned the Magicians (the fourth ‘M’ here) and sorcerers to use their enchantments.³”

According to Rev. Eu, the spirits of our land are being stirred up through the momentum of the evangelistas’ prayer movement (pix above).

He cast the battle of good vs evil as one between “our God” [Christian] and “the gods” of the despotic Pharaoh.

Contending for the Nations

18 Then Jesus came to them and said, “All authority in heaven and on earth has been given to me. 19 Therefore go and make disciples of all nations, baptizing them in the name of the Father and of the Son and of the Holy Spirit, 20 and teaching them to obey everything I have commanded you. And surely I am with you always, to the very end of the age.” — Matthew 28:18-20

Berita NECF, in its report headlined ‘Malaysian Church has Claim to Divine Inheritance‘, quoted visiting pastor John Mulinde as saying, “God has given the Malaysian church the mandate to disciple the nation in order to claim its inheritance from God”.

Dr John, founder of World Trumpet Ministries, was the main speaker at a three-day conference from Sept 7 to Sept 9 organized by the Full Gospel Assembly church in KL.

“Dr John in his message, Contending For the Nations, based on Matthew 28:18-20, stressed that it was possible to pray and believe for a nation to be won for God. This was because all authority in heaven and on earth has been given to Christ. Making disciples, according to him, entails not only personal and family salvation but also transforming the economy, government and the entire fabric of society of the nation.”

Fill the land with God’s glory

During the Subang Jaya prayer rally in mid-September, NECF’s 1,300-strong congregation prayed that “God would come and fill the land with His glory”.

It was an invocation and affirmation of the belief that Christians needed “to contend for the nation” in order to win Malaysia for God.

‘Moving from glory to glory’

Happy Msia Day again. 50 years; a year of Jubilee moving from strength to strength, faith to faith and glory to glory. We love our Msia :)

Christians in Malaysia must “pray for a breakthrough for the nation”, said Rev. Looi Kok Kim who is a member of the NECF’s prayer commission. 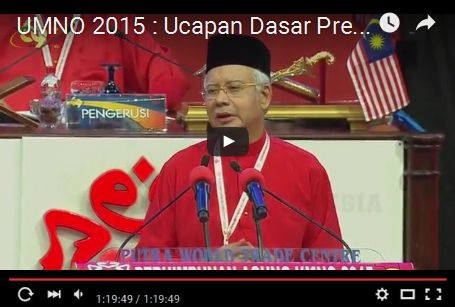 For every action there is an equal and opposite reaction, states Newton’s Third Law of Motion.

After consulting his wise men, the Umno president similarly looked to his religion’s holy book for guidance.

Read my lips: “No retreat, no surrender!”

“Allah give us victory over the disbelieving people”

Not unlike the evangelistas and their divine inspiration gleaned from the Bible, Najib too is bolstered with verses from the Quran.

3:160 — “If Allah should aid you, no one can overcome you; but if He should forsake you, who is there that can aid you after Him? And upon Allah let the believers rely.”

4 thoughts on “Is evangelical body NECF calling No.1 the wicked Pharaoh?”