Data is always fascinating. Below is a statistical look at the Chinese tsunami in Johor.

GE13 results for Parliament seats with a sizeable Chinese electorate:

The correlation coefficient above is 0.78 which indicates a strong relationship between the two variables, i.e. percentage of Chinese voters and votes garnered by the opposition.

The sole or only ‘x’ that fell off the line above is the DAP Malay guy who stood in the Parliament seat of Tanjung Piai, hahaha.

My theory on Tanjung Piai:

Note that DAP contested in 14 state seats in Johor. All 13 of DAP’s Chinese candidates won. The only DAP candidate for DUN Johor who lost was an Indian guy, hahahaha.

But you can see the pattern overall.

The opposition in Johor got roughly the same percentage or higher of the total votes as (equally as) the seat had Chinese voters.

In all the 10 sets of figures above, only DAP’s Mahdzir Ibrahim did not perform up to par against his MCA opponent in Tanjung Piai.

Oppo Malays vs Umno, with much help from the Chinese:

We can assume that these PAS and PKR Malay guys got the Chinese tsunami votes as well as some extra (+4, +6, +6) from the Malay fence-sitter voters.

Compare to the results in Bakri, Labis and Segamat where the oppo candidate was either a DAP man or a Chinese.

Segamat has 10 percent Indian voters and the BN candidate was Dr S. Subramaniam, the current MIC president. This mitigated the Chinese tsunami effect.

ABOVE: Hadi Awang is listed among the Top 500 most influential Muslims in the world

I belong to the five percent of Chinese voters who refuse to support the DAP. The 95 percent of the Chinese think I’m wrong.

Although I disagree with the overwhelming majority of my fellow Chinese, and I know I’m on the right side of history.

I don’t behave like them in significant ways. For example, I don’t mock the Malays as being so “very fragile and easily confused” in their faith and fearing the cross.

I don’t have that knee-jerk reaction either to always want to side with the West whenever a Muslim vs Western (legacy of Christendom) conflict arises. 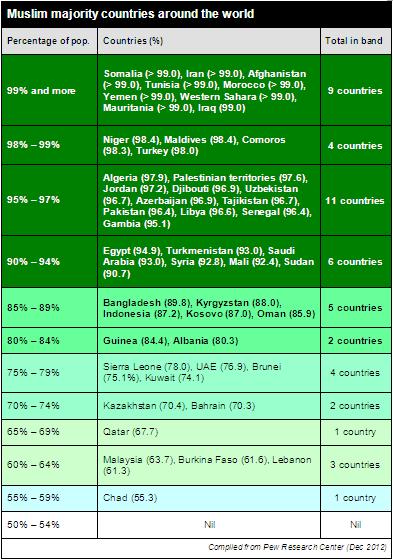 I foresee that the behaviour of the Dapster evangelistas will cause a backlash that will eventually take us back to Tanah Melayu.

Malaysia’s future is as a bumi Islam.

Muslim countries, by and large, are not multi-religious. They are singularly Islamic. A total of 30 countries have populations where more than 90 percent are Muslim.

Out of interest, let’s have a glance at the ‘stan’ countries:

It is rare for Muslim countries to be poly-religious.

The closest country in religious make-up to Malaysia is Lebanon – see green shaded table above.

And as we know, Lebanon has been wracked by civil wars fought between Muslims and Christians, including the Lebanese Phalangist Christians who massacred the Palestinian refugees in the Sabra and Shatilla camps. 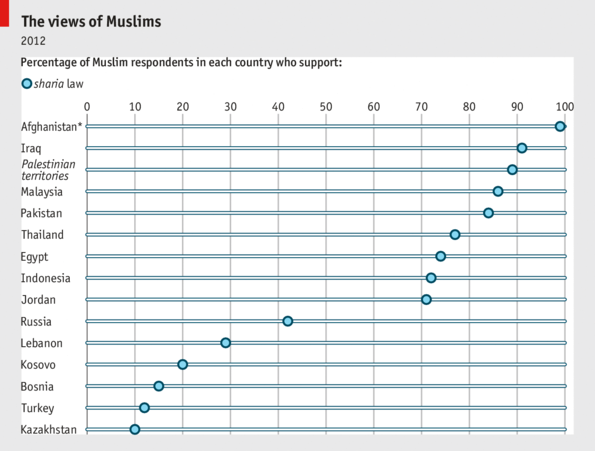 Malaysia is a highly religious country

The chart above is from The Economist working from Pew data. A survey by Pew Research Forum found that 86 percent of Muslims in Malaysia want syariah as our official law – see graph.

Just as I am in the very small minority among the Chinese where political orientation is concerned, I might also be in the minority for rejecting Ubah, i.e. to turn Umno upside down.

It is possible that a number want Najib toppled – his popularity ratings has dipped below 50 percent – but I personally prefer that the status quo be maintained.

I have my logical reasons for this, same as I have my rationale for not joining the DAP bandwagon when so many Chinese have hopped aboard.

Unlike the Bersih people who claim that they’re non-partisan, I’m quite willing to wear my colours on my sleeve. I already stated my stand as early as July last year – see screenshot below.

What annoys me is sheeple following the populist bandwagon.

Blogger Annie is willing to bersubahat with a Cina ultra just to kenakan saya. Likewise Tun will do anything just to get at Najib.

Tun was backing the opposition in trying to move the vote of ‘No Confidence’ against Budget 2016 in Parliament. He was willing to join the Bersih rally that sought Najib’s resignation. He is supportive of the oppo media that are hounding 1MBD.

You wait and see – very soon – who he bersekongkol with next.

The 95 percent of the Chinese are in the populist wave. Are they right?

Likewise the popular thing to do now is bash Najib macamlah esok akan kiamat. Are you sure you’re doing the correct thing?

The minority and unpopular opinion is not necessarily wrong. Malays have to think more rationally and not ikut hati (ikut Tun). It’s the future of your country, after all.

Btw, did you know that the architect of the NEP was an omputih? A Norwegian by the name of Just Faaland. He has been awarded a Tan Sri.

Sometimes outsiders who evaluate objectively try to tell you. But there is only so much we can do.

.
I may be wrong but I suspect the people around the Prime Minister are hawkish. I agree that he should take the hard line — be it against the DAP or the Protun.

Expect the Umno-PAS unity to happen. It will. I deal with facts and my instincts are usually good.

63 thoughts on “PAS and Umno unity will happen”