Wong Chun Wai’s exit from GMM is no loss.

In fact, it is a positive gain for Malaysia. Now if more two-faced evangelistas would only follow his lead and remove their corrosive Firster toxicity from our national mainstream.

What Scott says about the original purpose envisaged for GMM is correct. And it is for this very reason that Chun Wai’s resignation must be welcomed. A moderate organization like GMM should not be infused or tainted with ideology incubated by the evangeliSTARs.

For Scott to say ‘Loss of two members bodes ill for GMM‘ is way off mark.

Actually, Saifuddin had allowed GMM to be hijacked as a platform for the voice of the Firsters who are subverting the Federal Constitution.

BELOW: Ustaz Nasha, beside Najib and Foreign Minister Anifah Aman on his left

One man’s “outspoken” is another man’s loud firecracker

Scott Ng accuses the government (“we’re really speaking about Umno”) of recently having conducted “its authoritarian crackdown on critics and its embrace of extremist logic”.

Cracking down on cyberterrorists who pass themselves off as government “critics” is something the Umno-led administration should have done long ago. But better late than never, I guess.

Scott Ng wrote, “Now Nasharudin Mat Isa sits in the office once occupied by Umno’s last moderate, much to the consternation of activists and many outspoken moderates.”

It is music to the ears to hear that the “outspoken” Dapster-evangelistas are disconcerted by Ustaz Nasha’s appointment.

And isn’t it such a sweeping statement for Scott to claim for Pudin the “Umno’s last moderate” title? “Umno’s latest traitor” is a more apt description for the ex-CEO of GMM. After all, he defected to the rival party.

Extremists pointing three fingers back at themselves

Scott Ng wrote, “The former deputy president of PAS proclaimed himself a moderate upon taking the seat, but his record speaks of an ultra-conservative stand on issues.”

On the contrary, it is the Chinese ultras who are extreme. They can’t even open their mouth without curses, expletives and invective spilling out in a vitriolic torrent.

The track record of opposition leaders and their rabid supporters show them to be “the aggressors, liars and slanderers on their Facebook pages and media portals“.

Thus it is timely for moderate Muslims defend themselves (click to read call for action) against the Bintang Lima cyberterrorists who are descendants of the Bintang Tiga communist butchers.

Scott wrote that it is however possible “Nasharuddin may well have moved from the far right to the middle”.

Sigh. Scott is being very blinkered and biased with his persistent allegations against Ustaz Nasha. It is evident to anyone who’s not a Dapster that the former deputy president of PAS has always been measured and taking the middle ground.

It is instead the DAP leadership that is anti-Malay, anti-Islam and behaving like neo-Zionists.

Taking our country back from the “only 9 percent” bullies

Scott bemoans “the sudden exit of The Star’s Wong Chun Wai and former ambassador Redzuan Kushairi from GMM will be taken as a bad sign for [GMM’s moderate] agenda”.

Wrong. Chun Wai’s exit is fantastic news and a positive marker along Malaysia’s recovery road to quiet and serenity.

Malaysia will be peaceful and harmonious once again if the neo-Zionists and their destructive activities can be successfully contained.

Scott wrote, “The loss of a prominent moderate like Wong is certainly bad for the image of the movement”.

Haiyah. Scott is so easily fooled. Just because Chun Wai can afford to pay for huge billboards – see above – and newspaper centrespreads advertising himself as a “prominent moderate”, the FMT writer is taken in.

Evangelistas are far from being moderate. What they have is a 3G messianic, conquistador complex.

BELOW: 3G denotes Gold, Glory and the Gospel

NUCC another platform for immoderates to push Firster doctrine

Scott Ng wrote, “If [Chun Wai and Redzuan’s] departure is due to disagreements on the direction the movement is taking, then we can assume that the GMM built up by Saifuddin Abdullah left the building along with its architect”.

The nests that have been build by sneaky subversives are as dangerous as termite colonies. They are destructive forces eating away at the foundation of our Muslim nation.

If Chun Wai’s exit is due to his distaste for Ustaz Nasha (the EvangeliSTAR CEO has previously snided the PAS man in his J-Star column), then all the more Ustaz Nasha deserves a heap of accolades.

Now that the Firsters have removed themselves from GMM – and good riddance to bad rubbish – the next organization that merits attention is the NUCC.

NUCC also contains many immoderates who are carrying the Firster agenda too. It’s high time to either revamp the NUCC line-up or dissolve the liberal council altogether. 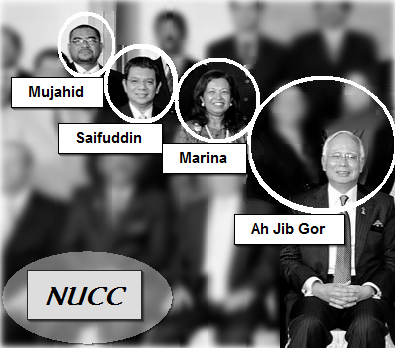