“It is obvious that the attempt to oust Mukhriz has nothing to do with his governance. Nor does it accord with democratic principles. It appears to be a mischievous move aimed at helping someone tighten his grip over power — to the detriment of the people.”

Dr Chandra’s article appeared in the Yayasan 1Malaysia website. He is the chairman of the 1Malaysia Foundation — which is Najib’s spiritual home, so to speak.

To recap, 1Malaysia chair Dr Chandra believes that the attempted ouster of Mukhriz is to help “someone” tighten his grip on power. And that this “move against Mukhriz” is something detrimental to the rakyat.

Well, I hope that the ‘someone’ concerned will live up to the fearsome reputation attributed to him by Dr Chandra, lest even more members of the public begin to doubt that he (the ‘someone’) is a man of action. 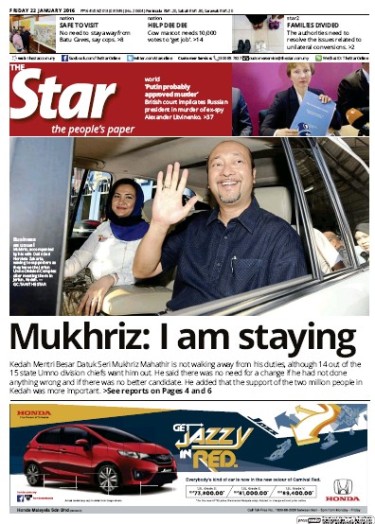 Yesterday too, Mukhriz made the cover of The J-Star print version – see above – as well as the top story (below) in the EvangeliSTAR portal.

With friends like the MCA, Umno doesn’t need enemies.

Or do you suppose that our ‘someone’, who is allegedly “tightening his grip over power” actually believes the positive coverage given to Mukhriz is without any agenda or ulterior motive?

In my humble opinion, it is the act of tightening the screws on The Scissors that would be of actual help to that ‘someone’ in his bid to maintain power.

Below is the front page of Sinar Harian yesterday.

Who is the culprit actually being blamed by Mukhriz for the price if milk going up? Isn’t he a part of the government too and among its policymakers? Therefore what solution does Mukhriz offer instead of merely merging himself with the problem?

Regardless of how soft the kid glove treatment by Najib, his own representatives – such as Dr Chandra – are already lobbing baby bombs at him. Buat ke, tak buat ke, still get blamed. So might as well he follow the Nike motto and “Just Do It”. 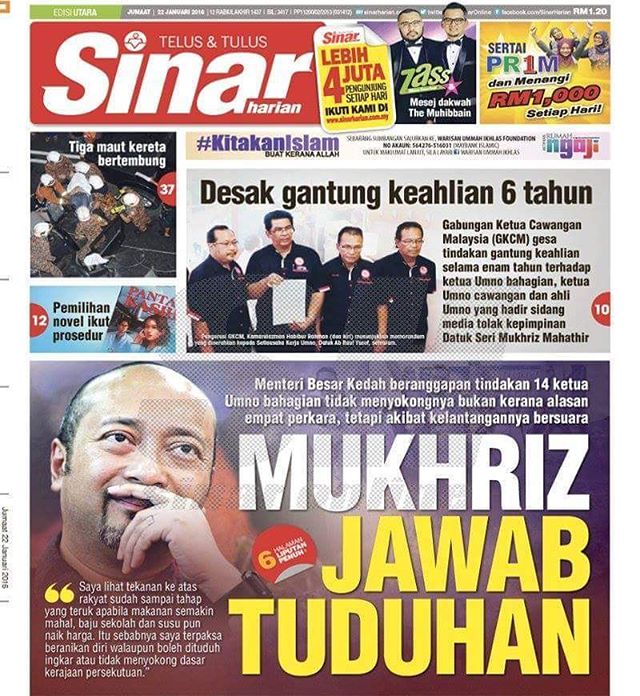 11 thoughts on “Little hand grenades exploding in the house”