MCA has a university — Utar.

How many more Chongs are there still in Utar actively moulding the young minds?

BELOW: Utar students inspired by Ah Jib Gor in the run-up to GE13

What is going on in Gerakan?!

BN party Gerakan has a uni too — Wawasan Open University.

It is hosting today an event organized by the Penang Institute, i.e. Guan Eng’s think-tank – see poster below. 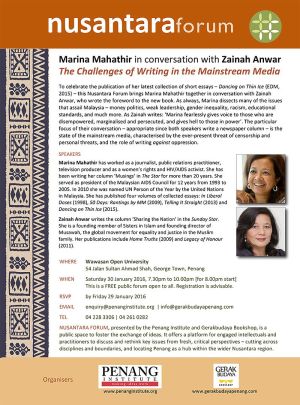 The event is co-organized with Gerak Budaya which publishes books by local opposition figures.

Now there is this trend of the Chinese, particularly evangelistas, eagerly nurturing Malay liberalism. The Gerakan-controlled university, by providing the event venue, seems to be in the thick of it.

In the political calculus, activities of the Malay liberals and the Protuns only benefit the opposition cause.

MCA is already proven to be a BN backstabber.

In order not to be tarred with the same perception brush as the owners of The Scissors, Gerakan should do more to help BN election efforts rather than be a dead-weight passenger on the BN boat.

Is Umno the only BN party willing to stop the DAP juggernaut?

Our thanks to regular commenter Mulan for the tip-off on this story.