“I can agree if you say DAP is the dominant party in [Pakatan Harapan] and able to dictate terms especially PAS is no longer in the equation. DAP is indeed powerful in PH states like Penang and Selangor.

“But to say that DAP can control Parliament/Putrajaya is too far fetch[ed]. Stop selling the story ‘DAP will takeover Putrajaya’. Numerically, it is impossible for GE14.”

BELOW: DAP mega rally in Johor running up to GE13 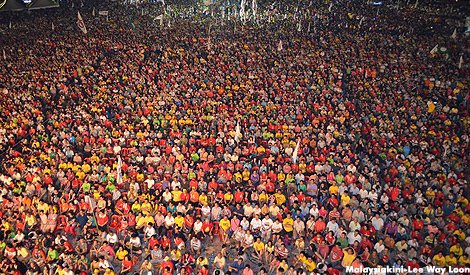 I disagree with ‘drinho’ that it is numerically impossible, for the simple reason that Malay votes are split into many different kabilah (loyalties) while the Chinese votes are solidly 95 percent behind the DAP.

But anyway, let’s do the math.

To rebut ‘drinho’, I shall now try to estimate the relative numerical strength of DAP vs Umno-Najib support. Please follow me patiently step-by-step as I take you through the figures.

Below is the population projection for the year 2020 (Note: Our national census is held once every 10 years, and the last one was conducted in 2010).

Chinese couples, on the other hand, have fewer kids and thus there are fewer Chinese babies.

In the current electoral setting, however, this is not a disadvantage as anyone under-21 can’t vote in GE14 anyway.

In fact for year 2018, the Chinese even have an edge – going by ratio – over the Malays. This is because the older Chinese population (see graph below), i.e. those in their 50s, 60s and 70s can all go out to vote compared to Malay toddlers, tweens and teens who can’t.

Differences in Malay and Chinese demographic pattern can be seen at a glance by the shape or bulge of the two charts above.

GREEN: There are a lot of Malay babies (ages 0-4, 5-9) and fewer Malay oldies or octogenarians (people in their 80s).

What the charts above tell us is that the Chinese population bulge is greyer/older and therefore in RELATIVE terms, ‘more’ Chinese among the population are eligible to vote, compared to Malays in the same age cohort.

In the distant future, say year 2030, the Chinese will be at an electoral disadvantage due to their shrinking birth rate. Nonetheless, for the immediate present, i.e. year 2018, the Chinese low fertility is yet to impact all that much.

BELOW: Mega rally in Han Chiang, Penang running up to GE13 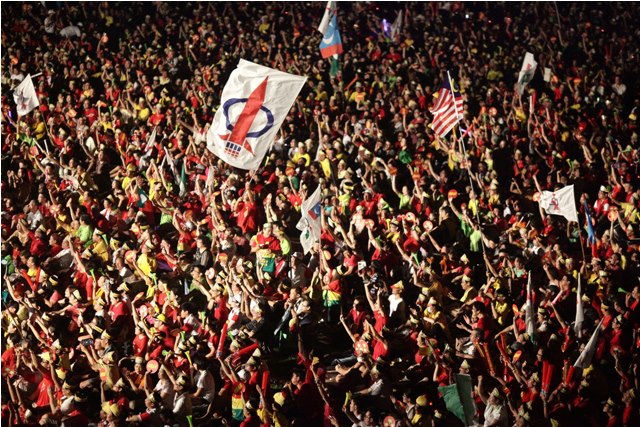 In short, come GE14, there will be 9.0 million Malays and 4.6 million Chinese who are of voting age.

But we must remember that the “ini kalilah” Chinese are over-registered, whereas the tidak apa Malays are under-registered, as voters.

In GE13, the electorate comprised:

BELOW: Our voting population in GE14

Next, the estimated number of Malaysians who will be of voting age in 2018:

Adding up the various ethnic categories above, there will be about 17,121,900 Malaysians who are of voting age.

The tidak apa Melayus are under-registered as voters whereas the rajin DAP people have been actively registering Chinese to vote, and not to mention strategically transferring their addresses (as alleged by the rival political parties).

Borrowing from the ratio in GE13, it’s probable that out of the 17.1 million Malaysians eligible to vote (age-wise), 52.63 percent of the voters will be Malay and 29.68 percent will be Chinese.

BELOW: Friendly ties before the bust-up

Our friend ‘drinho’ has kindly hammered home the point on how divided the Malays are.

The 9 million Malay votes are split:

If we divide the support of the nine million-strong Malay electorate (note: this is assuming perfect 100 percent voter registration) into six equal parts as above, Umno-BN under Najib will only be getting 1,501,876 votes.

Well, perhaps dividing into six equal parts is too much of a rough cut. So I shall attempt to fine-tune the division somewhat.

Okay, so instead of dividing the Malay votes into six equal parts according to the ‘drinho’-inspired formula, let’s scale down and divide the Malay voter cake into only three slices. And Umno gets the biggest segment, in keeping with the ratio of electoral support shown in GE13.

Umno is the strongest among the three Malay-based parties.

Their vote bank in the last election was likely: 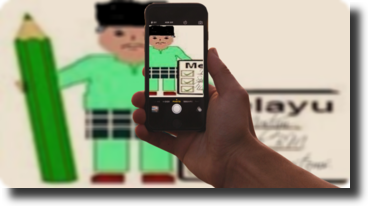 Or alternatively let’s be kind, increase and give Umno a lofty 55 percent of the nine million Malay votes but subtract 20 percent from the Umno tally as being lost due to the Tun-Muhyiddin-Mukhriz, etc and Najib’s unpopularity factors.

With 55 percent support, Umno will get 4,956,191 Malay votes. But we’re taking away 20 percent from this figure as bleeding by the supporters of Tun et al (abstentions, i.e. staying at home on polling day or protest votes, i.e. undi rosak or horror! switching to the opposition).

The 4.6 million Chinese votes are split:

With DAP retaining 95 percent support from the Chinese, the party will get 4,337,795 Chinese votes.

And we mustn’t forget one variable on polling day itself, which is the super high turnout by the Chinese and the low turnout or boycott by the Malays.

Umno’s best case scenario comes up to 3.96 million Malay votes vs DAP’s almost guaranteed 4.34 million Chinese votes. We’re working on the assumption that roughly only half the Malays support Umno while more than 9 out of 10 Chinese support the DAP.

The above is merely one hypothetical scenario and it’s still a distance (two years) to D-Day.

PAS is the game changer and kingmaker. Parti Islam swaying one way or the other will definitely shift the dynamics and throw the guesstimates above off kilter.

A gentle reminder to PAS:

You folks had better pantau how far the Chinese are achieving perpaduan with the native Christians. And then crunch the numbers carefully, ya.

I did the above as a research exercise in response to the challenge by ‘drinho’. It’s done on the basis of popular vote — one man, one ethnic headcount.

The real situation on the ground is complicated and not as straightforward as simply counting beans.

Due to rural weightage, Borneo advantage and outliers like Putrajaya having only 15,791 voters compared to Teresa Kok’s gargantuan Seputeh (85,976 voters) and anomalies like tiny Labuan serving as one Federal Territory seat, the 95 percent unified strength of the Chinese is still diluted.

Thus, the DAP will have to up its ante on its trademark Politics of Hate. This time, the DAP will need to go all out to make the Malays hate you-know-who to weaken you-know-which party in order to beat the system.

54 thoughts on “Election 2018: How DAP Chinese vs Umno Malay voters stack up statistically”