Maybe the [Malaysian] Chinese population in 2030 will drop even further. But the Chinese will be a lean, mean, highly educated and progressive community. Just like the Jews, they are nimble and able to survive in whichever condition and whatever political terrain.

What more the next economic superpower is China.

China has the clout and no world power can stop its economic tentacle. Today, Malaysia which is on a fire-sale is being snapped up by China and come 2030, China may be able to buy up the whole of Malaysia with still change to spare.

Malays on the other hand will be hard-pressed to compete, what more Malays will not have the skills and education required to compete.

There will be newer Malays with thousands of Bangladeshis intermarrying Malays and diluting the real Malay. The real Malay will need to share the already small pie with the new Malays.

Oil, the mainstay to help propel Malay economy, will run out or technological advances will be such oil may be something of a relic. Also, the DNA of the Bangladeshis or the future Malays is such that they will overwhelm the original Malays.

Add to that Malays will be torn into sectarians and split into Shiah, Sunnis, Wahhabis, Salafist and other sects. So, do not ever think being a majority is always advantage, not in a Chinese century. It is the minority Chinese who are all ready to embrace the Chinese century.

So, I think the gloating will only come to bite the Malays.

Protun blogger Annie alluded to Norman Fernandez as a “pariah” and bontot kuali, saying he is “ugly like the bottom of a wok still want to make so much noise”.

As is obvious, Annie’s vocabulary is just as ugly as the Dapsters. And uncannily or not, Annie … cluck-cluck … is also attacking the same targets as the Dapsters are.

The Protun-and-Dapster overlapping mob foment a herd mentality that urges their cult followers to unthinkingly hate on political targets selected for public lynching.

Norman became a Dapster bullseye when on the eve of GE13, he made an appeal to opposition supporters not to gamble their future by pangkah Bulan. At that time, DAP and PAS were still partners in Pakatan.

Annie has also alluded to Norman as the “flip flopping DAP reject“.

Annie is a proven liar.

The video above is a recording of Lim Guan Eng taken a week before Malaysians went to the polls on 5 May 2013. It features a reading of the DAP-PAS joint statement where both the political Islam and the political Christianity party ‘agree to disagree’.

One major sticking point between DAP and PAS is whether our country is secular or Muslim. Nonetheless, Pakatan’s agree to disagree formula provided enough leeway for the two strange bedfellows to pursue their raison d’etre separately, each on their own. 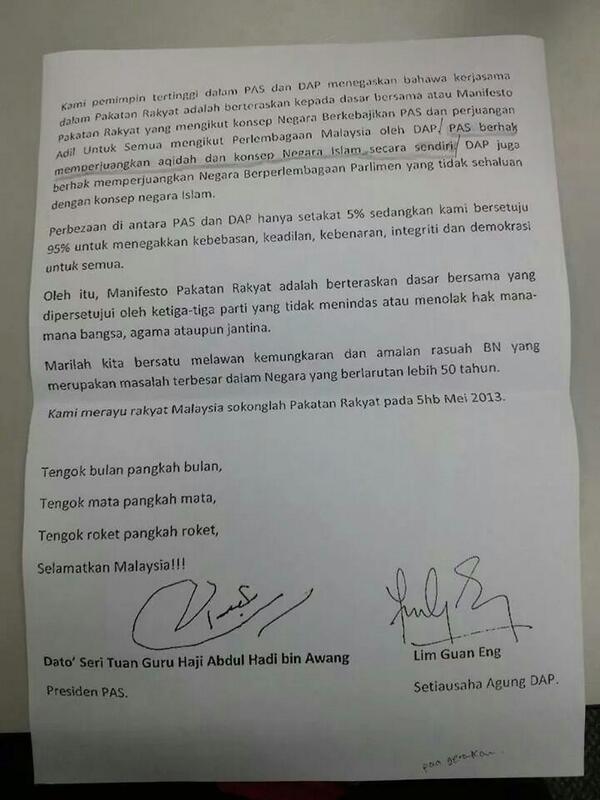 DAP betraying its own cause and voter base

The signature of PAS president Abdul Hadi Awang is on the document above.

Guan Eng too put his name to the statement agreeing that PAS maintains its right to pursue “negara Islam”.

Ever since his father Kit Siang took control of the party – see timeline below – DAP has been stridently against the Islamic state concept. You can even say that DAP has been against Islam as the mainstay of government right from the outset.

Yet in 2013, merely for the sake of political expediency and a shot at Putrajaya, DAP was willing to backtrack on one of the party’s most fundamental stand.

It is DAP that clearly ubah itself in order to grab power “Ini kali lah”.

Norman Fernandez is among the most ethical of former DAP leaders. He was steadfast to the founding principles of his party and hence had no choice but to oppose DAP’s willing accommodation of the PAS Islamic push.

Understandably, Norman balked at his party’s call for non-Muslims to vote for PAS. It was a voting choice that incorporated an implied acceptance of Hudud for All. Now that DAP and PAS have broken up, Norman is vindicated.

He was right all along but not in the eyes of rabid Dapster army though, who are loyal to the Lims (and not to principles instead).

The DAP hatchet men had mounted their vicious attacks on Norman when he threw a spanner in the works during the GE13 campaign and again post-tsunami when Liew Chin Tong made his move on DAP Johor’s then leadership. (Note: Johor DAP chairman Dr Boo Cheng Hau has been ousted.)

Very typically, the RBA carried out smear campaigns falsely accusing Norman and Dr Boo of this and that.

They did the same dirty on DAP national vice chairman Tunku Aziz Ibrahim when he refused to endorse the Bersih street rally to discredit the Election Commission. Dapsters always do that — fabricate stories and tell lies all the time. 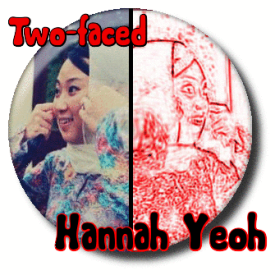 Annie the fraud and liar is becoming more and more Dapsterish by the day. Annie lied when he alluded to Norman being a “reject” who was “kicked out” of DAP.

Norman, in fact, chose to resign due to his disgust at the DAP two-facedness, especially in compromising on their own religious freedom as well as exploiting Islam to fish Malay support.

Annie further lied when he alluded to Norman “flip-flopping”. It is actually DAP that ubah or flip-flopped.

“Less than 10 years after it has sown the seeds of racial polemics within the Chinese community, the likes of Hannah Yeoh (left) and Lim Guan Eng are now wearing tudungs  and songkoks at various functions,” MCA’s Eric highlighted.

Annie has flipped-flopped from being Projib – according to Syed Akbar Ali, Annie is one of the “prepaid” (which Annie denounced as “nonsense” spoken by a “bastard”) – to being Protun and now Life of Annie is a toxic Dapster dump.

After flip-flopping over his gender and his race too, Annie now can’t seem to decide whether he’s still operating a political blog or some other writing genre.

While thinking people quickly realise to turn their back on the DAP, Annie Anakin is slowly but surely drifting to the dark side. Cluck cluck.

Annie is a liar and fraud just like the Dapsters