Rafizi Ramli’s lawyer Saiful Izham Ramli issued a statement to clear the air after his client kena kutuk kaw-kaw in the social media, according to a report by BNBBC.

Saiful said it is normal police procedure for Orang Kena Tangkap (OKT) taken to court to keep their hands clasped together at the back, even if not wearing handcuffs. This facilitates the police officer’s hold on to the OKT’s elbow.

Hence it was not playacting or wayang by Rafizi to elicit public sympathy, Saiful explained. It’s merely a usual police procedure when escorting to court an accused who is not a security risk, he added. 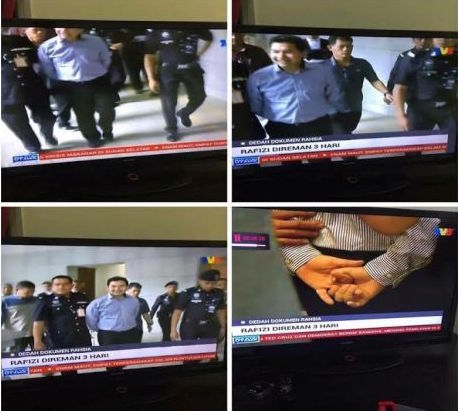 It’s quite simple really. When the OKT is willing to cooperate with the police, then everybody walks in an orderly manner — which you can see in the photo sequence above.

When you do not cooperate with the police, however, then you get the celaru scene below demonstrated by Azira Aziz, who is Hannah Yeoh’s senior aide.

Azira was not handcuffed but she was being arm-locked by the two women officers on either side.

BELOW: Azira battling the authorities every step of the way … so Dapster! 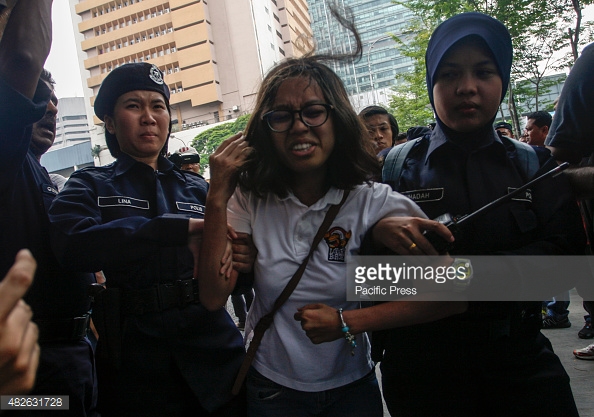 Might as well just follow police instructions and put your hands behind your back so that, like Rafizi, you can walk with a calm smile on your face … unlike the unladylike sight of Miss Azira above.

6 thoughts on “Rafizi and his ‘handcuffs’”