Blogger otai ‘A Voice’ wrote @ his blog Another Brick in the Wall yesterday:

“Some say he [Zakir Naik] is a good debator and converted non-Muslims into Islam. Unfortunately, oratory skill does not impress us. One aspiring Prime Minister had great oratorial skill.

“It goes back to the characteristic of preachers or pendakwah. A pendakwah should have three important qualities; ilmu (knowledge), amal (application of ilmu) and adab (proper and exemplary conduct).

“Zakir – pix below – serves a certain purpose but may not be exemplary for Malaysia.” 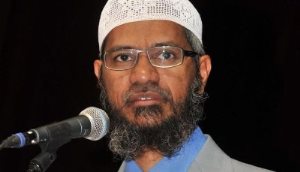 Blogger ‘A Voice’ also believes that it is not important to argue over the controversial pendakwah, saying Zakir Naik could be just “another celebrity preacher which usually does not add much to existing body of knowledge”.

Explaining his stance on the issue, A Voice said:

“We have been living in peace and harmony with great tolerance for various races and religions.

“By right, Malaysian Muslims should stop bringing such preachers from India and Indonesia but instead be preaching to these countries how to live in peace and harmony.

“Zakir Naik comes from a country with long history of clashes between different faiths and races. His combative style of debate is the wrong orientation for Malaysia.”

“Off course, we expect to get criticised from fellow Muslims for saying so.”

Bishop says Christians in Malaysia are ‘fearful about the future’ buff.ly/1MmppJ4 https://t.co/iRgd9VcIEL

Thus far, we’ve heard a thunderous silence from the usually vocal and articulate Christian community with regard to the Zakir Nailk controversy. It has been only Indian Hindus and a sprinkling of Malays speaking up.

So much for the love-love-love that the Christians constantly profess for their Bangsa Malaysia ‘brothers and sisters’.

List of political parties, leaders, organizations and public figures who are FOR & AGAINST the staging of Zakir Naik’s talk — click HERE

Zakir Naik does comparative religion and discusses Hinduism. His Muslim audience listen to him compare Islam and other religions.

The Christians in Malaysia are fine with this as long as it is the Hindu deities that the preacher is disparaging.

A Voice: “Anyway wattaheck, let’s not be hypocritical”

Henceforth, Christians in Malaysia have no further cause to complain when the next seminar or forum rolls around warning Malays about the threat of Christianization.

A Voice notes that with the exception of Buddhists, adherents of the other faiths will naturally try to spread their religion to non-believers.

“To Christians, propagating Christianity is a cardinal duty. Guess it is same of all other faith, Muslims included, to propagate God’s message. Each faith’s version of God’s message, off course,” observes A Voice.

Both sides know the name of the game.

“Why should they [Christians] be upset of Muslims discussing among themselves of this threat?”, he asks.

Looking at the current development, A Voice arrives at a logical conclusion, “So the Christians should not be offended about the close-door session to Muslims at UiTM about Christian threat”.

A Voice’s full blog entry can be read @ http://anotherbrickinwall.blogspot.my/2016/04/more-important-let-zakar-and-zikir-naik.html