It was heartwarming to see SUPP president Dr Sim Kui Hian being hoisted by supporters after his victory in Batu Kawah yesterday. The uplifting moment felt as good as when Gerakan president Mah Siew Keong won the Teluk Intan by-election in 2014.

For too long, we Chinese BN supporters have been pummeled, trampled and spat upon due to the abject failure that is the MCA. This BN senior-most Chinese party is reminiscent of the Walking Dead (bangkai hidup).

Better that MCA just die. Die already, will ya! Rather than live on your knees grovelling at the feet of the Dapsters, and licking the arse of evangelistas.

Thankfully SUPP and UPP put up a fight and managed to rollback the DAP’s inexorable advance. (Far from putting up a fight against the BN’s nemesis, MCA is instead colluding with the opposition behind BN’s back.)

Big Brother Umno must realise that even if only a very small minority (call them Sparta’s 300) of Chinese is willing to stand up and confront them, the DAP evangelical juggernaut can be halted.

The MCA, however, is clearly not able or willing to carry out the task.

Size does not matter. MCA is supposedly big – claiming to have one million members (snort! Aku tak ‘caya) – but useless in the battlefield.

SUPP is merely a state party (not a national one like the MCA) but at least it is showing some gumption against the DAP pandemic. Dr Sim’s exceptional performance in the Sarawak election, for example, went off the ‘charts’ — explained below. 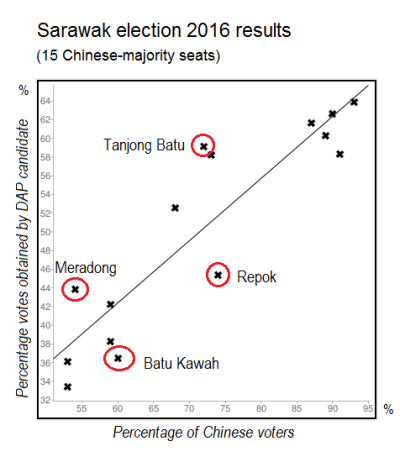 The line in the graph above shows the close correlation between the ratio of Sarawak Chinese voters and the electoral performance of the Chinese opposition in the state’s 11th general election on May 7.

It’s become a formula that the more Chinese voters there are in a constituency, the stronger the support for DAP candidates. This is indicated by the crosses that are close to either side of the line in the graph above.

The duo who broke the ‘Cina taksub giler’- DAP line (see scatter plot above) are the SUPP candidates represented by crosses marked in red circle, i.e. Batu Kawah and Repok.

On the other side of the coin, two DAP candidates who outperformed their party peers by getting sokongan Cina tahap gaban are the former YB Meradong and the new YB Tanjong Batu. See crosses marked in red circle.

These four crosses – Batu Kawah, Repok, Meradong and Tanjong Batu – fall a bit away from the otherwise fairly decent slope of 0.67.

•  Meradong — DAP incumbent Ting Tze Fui lost but nonetheless cannot be faulted too much for failing to retain her seat. Meradong, which has 54 percent Chinese voters, is neither a DAP stronghold nor a traditional DAP profile area, i.e. usually characterized by an 80-90 percent urban Chinese population.

Going by the ‘Cina taksub giler’- DAP line graph above, Ms Ting – who won Meradong in 2011 at the relatively young age of 30 – did well by getting sokongan Cina tahap gaban.

The 11 new seats in Sarawak are as follows and all were won by (jeng jeng jeng  :)

Okay, back to the old seats …

The secret of BN Sarawak’s success

The only seat with a substantial number of Chinese that the DAP failed to win is Repok.

Through their landslide victory, Team Adenan clawed back five seats with between 50 and 60 percent Chinese voters that were won by DAP in 2011. They are Batu Kawah, Meradong, Repok, Piasau and Dudong.

How did Adenan Satem succeed in containing the DAP currently to its mere seven Cina pekat seats, out of the 82 total DUN seats up for grabs?

Answer: He took the bold course of being a strongman leader willing to do the unpopular thing, which is to prevent the DAP evangelistta toxins from contaminating his state.

And the Adenan antidote worked.

BELOW: Hannah Yeoh stopped at Kuching airport from entering Sarawak to spread her vitriol in the churches 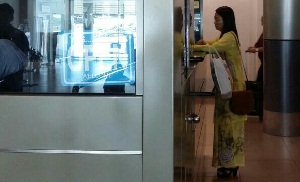 The list below of Sarawak Chinese majority state seats is arranged in descending order of Chinese percentage of voters.

Number of votes indicated in brackets
.

32 thoughts on “Results analysis: Super SUPP did what MCA would not”