According to Zahid Hamidi, the constitution/law to establish a government in Sarawak allows for only three deputy chief ministers.

He is, however, trying to help a Chinese become Sarawak’s fourth DCM — see MMO story tweeted below.

DPM: Efforts made to amend Sarawak constitution on DCMs bit.ly/1ZPASsM

I’m not sure how the deputy prime minister is going to pull it off since Umno does not have any Aduns in Sarawak to table or vote on such a bill.

The PBB Aduns will surely toe their party line while the rest of the BN components are Sarawak-only state parties such as PRS, SUPP and SPDP.

It is Adenan’s call following the Dayak tsunami

James Masing is made Sarawak DCM because his Dayak party delivered 11 seats, and at the same time notching a perfect score by winning every single seat it contested.

The performance of SUPP – the BN’s Chinese-dominated party – is not as sterling. It contested altogether 13 seats but only won half, i.e. seven seats in mixed areas. SUPP lost in the heavily Chinese areas.

On a sidenote, the DAP despite suffering a slight erosion of support still managed to carry all the Chinese seats (with the exception of Repok) on comfortable majorities.

For details of the DAP’s electoral outcome in Sarawak, see list at bottom of page. 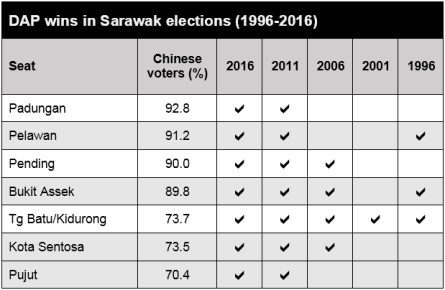 From the table above which charts the DAP’s 20-year track record in Sarawak, we can see that the evangelical party now has a chokehold on constituencies with a population of 70 percent and above Chinese voters.

DAP did not fare so well in the earlier state elections of 1996 and 2001. However once the pushy evangelistas took over the party leadership and floored the pedal on their hate politics, the DAP’s fortunes rose in tandem.

In 2006, i.e. two years prior to Pakatan sweeping the west coast of the peninsula, DAP won half a dozen Sarawak state seats, which included among them four DUNs that had between 73.5 and 90 percent Chinese voters.

Later as a prelude to the 2013 general election Chinese tsunami, the DAP upped its Sarawak haul to a fearsome 12 seats in PRN10. 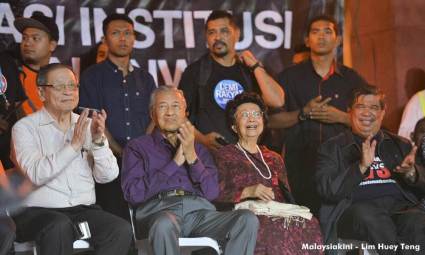 In the last Sarawak election of 2011, DAP contested 15 seats. Apart from losing in three, it was otherwise a hugely successful run for the party.

Since the DAP had limited itself then to largely the Chinese areas, it did not give the natives any clue or hint as to the party’s real but hidden monstrous nature.

It was only in the recent election that the DAP vastly expanded its ambitions to make a bid for a total of 31 seats. This time, DAP managed to hold on to only seven and was given a resounding beating in the rest of the 24 semi-urban/semi-rural and Dayak-majority seats.

In fact, some of the DAP candidates garnered even fewer votes than several independents. This was because the local population outside of the cities were spooked and aghast at the DAP’s viciousness and malice displayed during the campaign.

One of the first things Adenan Satem did was to ban the DAP evangelistas from setting foot on Sarawak soil.

This move helped in preventing toxic leaders such as Hannah Yeoh from injecting her venom into the Sarawak churches.

Adenan’s actions came across as autocratic but nonetheless his team, including Chinese members from SUPP and UPP, succeeded in derailing the DAP juggernaut. There is no other way to deal with the DAP’s endless hate and vitriol aside from drawing a line in the sand.

And BN Sarawak has shown itself to be more effective in fighting the DAP than Umno and its biawak hidup little pet — the MCA.

BELOW: A Bersih 4.0 Yellow Shirt farting on a punching bag that had Najib’s face/photo plastered on it 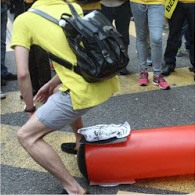 Will Umno ever learn?

It is Umno that should take advice and a leaf from Adenan’s book rather than the parti Melayu try and foist on PBB its own methods proven to have failed in the peninsula.

Face it. If not for the Sarawak and Sabah bloc of votes, Lim Kit Siang and his son Guan Eng would today be lording it in Putrajaya.

Adenan told a press conference that he would have appointed a Chinese DCM had the SUPP delivered all its seats … something which the PBB and PRS achieved. He set the bar requiring BN Chinese parties to prove their mettle in Chinese areas.

Umno fails to do the same with MCA by asking the Chinese party to grow a pair and fight DAP mano e mano rather than piggyback the Malay-majority areas.

Since SUPP failed to win the Chinese areas, Adenan did not appoint its president as one of his DCMs.

In other words, Adenan refuses to reward below par performers even though SUPP actually did much, much better relatively speaking than MCA.

The problem does not lie with Adenan for not appointing a DCM No.4. The problem is Umno for coddling a party with ‘Chinese’ in its name but losing in every Chinese absolute majority area.

Another problem with Umno is failure to deal with its rejects who ubah their allegiance and make an astounding U-turn to whack the Malay party kaw-kaw. For example, that Protun prepaid blogger who previously joined the “Apa lagi Cina mahu?” chorus.

Joining his handler’s Sour Grapes bandwagon over the BN success in Sarawak, the DAP-aligned “Melayu screw Melayu” mercenary instrument is ranting and raving against Umno.

This same Protun Malay (echoing the Dapsters who proliferate in his blog) is calling Umno a “racist”, “despicable” and “hateful” party. Why? Ostensibly for betraying the BN multiracial spirit and permitting the Chinese to be increasingly marginalized.

Umno should clean up its own backyard and backstabbing rejects first. Sarawak BN is doing more than fine without Umno’s meddling.