“Stop the invasion of Muslims” was Norbert Hofer’s vow — see Washington Post on May 19.

Hofer has just narrowly lost his bid for the presidency of Austria.

The ‘far right’ (a label by the media that is overwhelmingly controlled by the left) in Europe today sport an image more of polished patriots rather than beer hall rabble rousers.

At 45, Hofer (pix right) is youngish and a salt-and-pepper blond with chiselled features.

He’s comfortable in front of the camera and looks good too. His professional background sounds impressive — in aeronautical engineering.

‘Ban the azan’ is a call made in the manifesto of the Alternative fuer Deutschland (AfD) party in Germany.

AfD leader Frauke Petry (pix above) is a telegenic 40 year old with hair styled in a pert pixie cut and known for smiling a lot in her press interviews.

It is in a way mildly surprising that someone like Petry who’s trained in research chemistry – not your typical talent pool for politicians – has shot up so fast in national prominence by leading a young, anti-Islam party.

Then in France there is the 20-something blonde bombshell who is the poster girl of the National Front — Marion Maréchal-Le Pen (pix left).

The junior Le Pen is niece of FN leader Marine Le Pen who’s tipped to have an even chance of becoming France’s next president.

Although young, Maréchal-Le Pen is already an influential politician in her own right. Her party has an anti-Islam reputation too.

One of the chief concerns of these right wing politicians is to secure their country borders, and specifically against Muslims.

Europe’s attractively packaged far right is unlike, say, Umno’s Tajuddin Pasir Salak or Jamal Sekinchan. You cannot as easily accuse them of being ‘kolot’ and kicking out “racist”, knee-jerk responses.

Muslim immigrants from war-torn countries of the Middle East and North Africa who are flooding Europe bring with them a different set of values.

“Hasna Fadl, a Syrian asylum-seeker, arrived in Berlin a few months ago. There’s one aspect of normal European life that she worries will influence her 4-year-old daughter. She was on the subway one day when the child giggled and pointed out a German couple kissing. In her village outside Damascus, such a scene would be unimaginable.

“Having nobody to turn to for guidance, Fadl, 42, taught her to say “nicht gut,” – “not good” in German – “every time she sees men and women in each other’s laps.”

Excerpt above from ‘Now a new divide threatens Europe‘ (Bloomberg, 20 May 2016).

(1) To summarize, Hasna is an asylum seeker from Syria who has only been in Berlin a few months.

(2) She is being supported by German taxpayers in her housing. A refugee also receives an allowance of at least 400 euros per month.

(4) She teaches her young daughter to openly chide German couples riding the U-Bahn (LRT) that their kissing is “not good” behaviour.

(1) Hasna is entitled to her personal Muslim conservatism. Germany does not ban the hijab.

(2) She is not wrong to teach her daughter cultural values from their original society, such as kissing in public is frowned upon.

(3) But what about a newly arrived foreigner telling off native Germans on what they can or cannot do in a shared public space? In a sense, the four-year-old Syrian girl had publicly ‘aibkan’ (shamed) the Germans who openly show their affection. 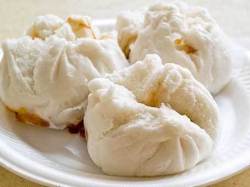 An ex-evangelist’s views on halal requirements

Boo observed that while hawker stalls (braised duck, chicken feet and char koay teow) in George Town were bustling with Chinese diners, there were however no Malay patrons.

Boo then proceeded to ask, “Why can’t Malays eat at non-pork Chinese restaurants? Not all Chinese dishes contain pork.”

She then talked about “irrational fears of so-called pork ‘particles’ contaminating the air” and declaring, “Not only do such concerns sound ridiculous; there’s also an undertone of racism”.

Boo further lamented that even food fails to “escape the racial lens in a country where everything else from political parties to government forms are racialised”.

Our food courts are segregated. Calling the general phenomenon “food segregation”, Boo goes on to describe how in her neighbourhood, “patrons to a Malay nasi lemak/bee hoon seller are mostly Malay, while those who buy breakfast from a Chinese bee hoon seller just a few feet away are mostly Chinese”. 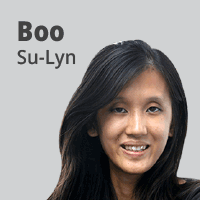 .
Similar disapproval of others’ conduct

The Syrian immigrant (in the Bloomberg story cited above) disapproves of the Germans kissing in public.

Boo Su-lyn has issues, e.g. “Not only do such concerns [about contamination by pork] sound ridiculous; there’s also an undertone of racism”.

Boo’s WHY “we don’t eat together” whinge is listed below in bullet points.

Why, why, why cannot?! Ms Boo whines.

To her, the halal meticulousness is an “obsession”.

“Malaysia’s obsession with ‘halal’ food, to the extent of selling chickens that undergo ‘Quranic therapy‘ after they’re slaughtered, or so-called ‘halal’ ice cream made with Zamzam water from Mecca, fosters disunity. I even saw so-called ‘halal’ jeruk (pickled fruits) sold in Penang.”

“This unhealthy obsession foments suspicion on Chinese food sellers, even if they’re not selling pork, and discourages Malay-Muslims from dining with other Malaysians at the same table, at the same restaurant, or even at the same section in a food court.” 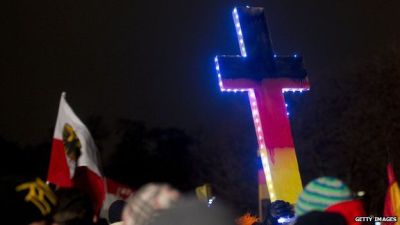 ABOVE: A Pegida (Patriotic Europeans Against the Islamisation of the West) street demo in Germany

M’sia not immune from nativism trend

The Malay Mail‘s Boo  Su-lyn wants to know “How can we promote unity if we can’t even makan together?”

In Europe, the nationalist parties do not care to promote unity. They want to stop Muslims “invading” their country.

The Syrian woman (through her young child) telling off Berlin commuters over their public display of kissing is an example of someone from a strict culture showing her disapproval of the native’s social behaviour.

Boo Su-lyn’s why-why-why whinge on halal observance is an example of someone from a lax culture showing her disapproval of the native’s close attention to dining taboos.

Both reflect the same clash of civilizations. It is for this reason that the right will rise in Malaysia.