Ridhuan Tee agrees with PAS presiden Hadi Awang that it is better to be friends with cattle than with swine.

Referring to the uproar against Hadi’s Parliament bill to amend Act 355, Ridhuan said in Sinar Harian that  the “ultra kiasu” would, in the past, secretly collaborate to oppose the enforcement of syariah jurisdiction.

In the same article, Ridhuan wrote:

Ridhuan urged his fellow Muslims to beware the plans hatched against Islam by enemies of the faith. According to Ridhuan, the majority of these enemies of Islam are Christian evangelists.

Ridhuan further expressed his unhappiness with the non-Muslim BN political parties over the hudud matter by withdrawing as an MCA life member.

Explaining his decision to quit MCA, Ridhuan said he does not want to bear the sin of remaining in a party that is the enemy of Islam. “Siapa memusuhi Islam, dia adalah musuh saya juga,” he declared in a press statement yesterday to Ismaweb.

The call by Ridhuan for MCA to leave BN echoes Isma’s editorial on Sunday pressing for MCA president Liow Tiong Lai to resign as Transport Minister with immediate effect.

In an article by Ismaweb‘s senior editor headlined ‘Menteri Pengangkutan boleh letak jawatan sekarang: Isma‘, Liow was told not to busybody himself meddling in the affairs of the Muslims.

Backlash against MCA from various quarters

Perkasa Islamic affairs bureau chairman Dr Amini Amir Abdullah was quoted by the Malay Mail as saying the MCA president, together with his Gerakan and MIC counterparts, are welcome to make their exit.

Only those who respect the Federal Constitution basics as well as the majority Muslim population need stay in government, said Dr Amini according to an FMT report yesterday under the heading, ‘Tak setuju hudud, sila letak jawatan, kata Perkasa‘.

Zakhir Mohamed aka Big Dog responded by asking Wee and his party colleagues to “Just do it”, i.e. resign. See his tweet below.

Why ready? Do the Nike thing! Just do it. The Malays can easily elect other MCA candidates in your constituency https://t.co/W2rRSCn2VR

MCA scammed by ‘wag the dog’

“It is time MCA, MIC, Gerakan and those other anti-Islam parties go join Pakatan Harapan so that Muslims from Umno, PAS and others can unite against the onslaught on Islam and Muslims by the non-Muslims,” said Raja Petra.

In his opinion, the non-Muslims are banding together to launch an assault on Islam as the fault line over the issue of Hadi’s bill is clear-cut.

Unfortunately MCA has been made the patsy in a case of ‘wag the dog’. MCA is the ‘dog’ that is being wagged by its tail, the Nest of Evangelistas.

Meaning, although it is mainly Buddhists who man the MCA mothership, nonetheless it is the evangelistas piloting the party’s media empire that has set the belligerent agenda.

BELOW: Liow Tiong Lai is a weak leader; it is J-Star CEO Wong Chun Wai who is the driving force behind MCA’s public tone via media 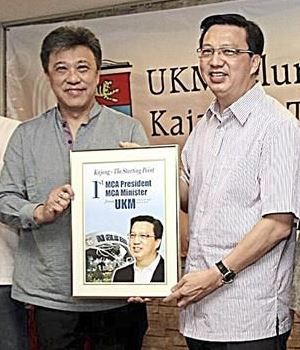 MCA is not an evangelical party and neither is its top leadership Christian, unlike the DAP. Yet in the current backlash following the eruption over Hadi’s bill, it is MCA that has borne the brunt of the opposite reaction by Malay-Muslims.

This only goes to show how adept the anti-Islam DAP are at exploiting useful idiots (MCA!) to act as the buffer or shield while its Dapster-evangelistas slyly throw stones unseen.

The DAP sneaky bastards are masters at getting others to do the dirty work, such as its the Melayu-screw-Melayu agitprop and psywar crew. (Think the lebih-Cina-dari-Cina Umno reject currently on the ultra kiasu 20k payroll.)

While it is actually DAP inciting the Chinese against Malays and vice versa, it is MCA ministers however that are made to pay the price. It is MCA leaders who are being called upon to quit their posts, e.g. MCA’s Gurun Adun who felt compelled to resign as Kedah exco.

You won’t see the DAP Selangor excos – or Hannah Yeoh the Speaker – resigning as challenged by MCA’s Ti Lian Ker despite a belief that DAP is responsible for the “hudud crisis”.

After all, the evangelical party had made false assurances to the Chinese community not to fear hudud if they’re neither robbers nor thieves. (See press statement yesterday by MCA publicity bureau chairman Chai Kim Sen.)

The DAP evangelista leaders are unscathed and sitting pretty enjoying the perks of power and not to mention salaries almost equal to the prime minister’s. But you can expect the MCA suckers to lose their government jobs very soon come October when Hadi’s bill is resubmitted to Parliament.

Raja Petra admonished, “Chinese should stop trying to prove they are stupid”. No further proof is needed that the MCA Chinese have been soundly snookered by the DAP Christians.

BELOW: The super pay hike enjoyed under Khalid Ibrahim’s watch