The first attack was on the Movida nightclub in Puchong, Selangor on June 28.

Should there be another public insult by the Chinese against Islam, “we will launch a second terror attack,” warned Isis militant Abu Hamzah Al-fateh. 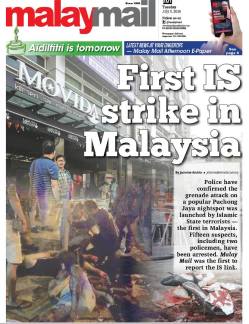 In his Facebook-Messenger interview with Oriental Daily News, Abu Hamzah asked the publication to advise Malaysian Chinese to refrain from provoking Islam.

Abu Hamzah is the nom de guerre of Muhammad Wanndy Mohamed Jedi, a Malay from Malacca.

“We will launch a second terror attack. You tell the IGP that we are not joking,” he said to Oriental Daily — see report in Press Digest (The Sun Daily, 5 July 2016). 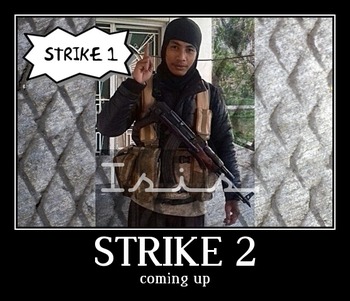 Muslim NGOs yesterday lodged police reports against YB David Nga Kor Ming of the DAP over his taunting and baiting in Facebook.

Meanwhile Hannah Yeoh seems to think that in the matter of curbing Islamic fanaticism, our religious authorities have gotten hold of the wrong end of the stick in “making threats against the liberals” instead.

The DAP evangelistas, who are themselves Christian fanatics, like to endlessly provoke. It is obvious that Isis feels provoked by these people.

They are master practitioners of Orwellian doublespeak, i.e. preaching one thing and doing the complete opposite. For example, they preach peace and harmony but they’re really experts at demeaning other religions.

Buddhist/Taoist Chinese dont condemn others during CNY. Only DAP fanatics Christian will do that. @tonypua #idiot. https://t.co/EthX0u07jD

BELOW: Nga’s Aidil Fitri message in FB features a lighthouse which resembles a mosque minaret against the backdrop of the Stars and Stripes

DAP is the Dangerous Action Party.

“Get rid of fanatics Christian in DAP, then Malaysia will be safe.” — Huan Cheng Guan, Parti Cinta Malaysia vice-president

“Malaysian Islamic State (IS) member Muhammad Wanndy Mohamed Jedi, also known as Abu Hamzah al-Fateh ― who is believed to have been behind the grenade attack on a club in Puchong, giving the orders from Syria ― reportedly warned the Chinese not to insult Islam.

“He even had the nerve to say that IS would take action if there was another insult to Islam akin to the ones made by former sex blogger Alvin Tan, acting as if the terrorist group is the guardian of Islam when they are completely antithetical to the religious teachings that preach good.”

When Isis threaten the Chinese, they will target Chinese locale

“We must show IS that their actions are completely unacceptable, that they have absolutely no justification to threaten more attacks on the basis of ‘insults’ to Islam.

“We must show them that when they threaten the Chinese, they are threatening all Malaysians across race and religion.”

Again, Boo is being biased.

A lot of Malaysian Muslims believe that the actions of the DAP evangelistas too are “completely unacceptable”, to the extent that the religious provocation caused police reports to be made.

Rather than Boo indulging in prejudice – “murdering people who don’t share your beliefs”/”they have absolutely no justification” (does she mean that ‘murderous’ Malays are merely imagining the insult?) – why can’t DAP evangelistas just desist from gratuitously offending Muslims?

The devil is DAP

“We must show them [Isis] that when they threaten the Chinese, they are threatening all Malaysians across race and religion.

“The way to respond to so-called insults to religion is not through violence, but through rational discussion and debate.”

The time for pacifism is over because DAP evangelistas are incapable of “rational discussion and debate”. They’re actually quite deranged.

Since when have demented people ever been receptive to common sense?

So when Isis make their threat, they are not “threatening all Malaysians across race and religion” (as claimed by Ms Boo) but specifically targeting Chinese. The offensive DAP evangelistas are, most unfortunately, all mainly Chinese.

In her parting shot, Boo wrote:

“Our entire worldview must be radically different from theirs to show Muhammad Wanndy that IS is not everywhere in Malaysia.

“When we treat people of other faiths with respect, tolerate criticism and insults, and show kindness to those who are different from us, then IS would have lost not just the battle, but the war.”

In effect, Boo is saying above that when Muslims are willing to “tolerate criticism and insults” to their religion, then Isis would have lost the war.

Her masochistic prescription is not the kind of bitter medicine that any god-fearing Malaysian Muslim would want to swallow. And nor would Muslims care either to upend their “entire worldview [so as to] be radically different” just to please the liberals and the Christians.

In fact, Boo’s exhortation will have the opposite effect. Not only will Isis be spurred to defy her presumption but Isis will gain even more tacit support from non-combatants and the silent majority.

DAP and Ms Boo’s ilk are kindle to the Isis fire. When Isis strikes again, police must look into the DAP connection as one of the catalysts for their attack.